San Bernardino’s Generation Now was tactical in its way of having the community break away from the typical hangout to enjoy festivities at the Garcia Center for the Arts in San Bernardino on May 26.

The Spirit and Arts event occurs every fourth Friday of the month and relies on receiving donations from local city patrons to provide resources so individuals don’t have to worry about purchasing their own art supplies.

The Garcia Center, which is run by SB’s Valley Concert Association, is also home to artwork and performances since its establishment in 2015.

Those in attendance had the opportunity to enjoy a refreshing glass of wine while also enjoying some snacks during intermission.

The center is located on E Street and 11th Street, adjacent to the newly opened park and skate park.

The parks are named after Bryce E. Hanes and Jon Cole, both local heroes who lost their lives as they served to protect their community.

Now, they are being honored with this new friendly environment to revitalize the city.

The artist of May is Erok, a local artist from the Inland Empire who helped the crowd with the technique of graffiti art based as they painted a rendition of his lion portrait.

The painting called ‘Strive,’ was influenced by the artist’s upbringing in San Bernardino during the torment and prosperity that has impacted the city in recent years.

Everyone who attended the event was asked to bring a small personal item they could incorporate into the art piece.

“I’m not much of a painter but spending time with friends and being accommodated with food and wine made painting seem much more than a hobby,” said David Arreola.

The lion was also symbolic as it depicts the pursuance of a better community in which we can invest our spirit to improve the world.

“For my painting, I added a simple drawing of my pet dog to throw my own twist on it because having that freedom to paint whatever we like and not sticking to the script was really inviting,” continued Arreola.

This is also a fun way to create a beautiful painting in the company of other members of the community and could be a pleasant gift for family and loved ones.

More events are shared on the center’s social media which aims to incorporate community days, silent auctions and workshops for almost any occasion.

If you are interested in being a part of this local event make sure to check out the next Spirit and Arts on June 23. 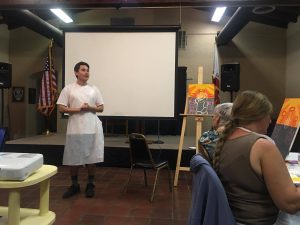 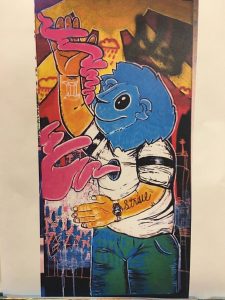 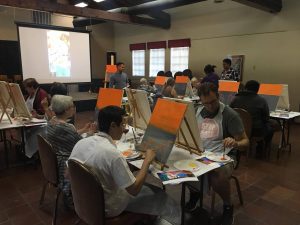