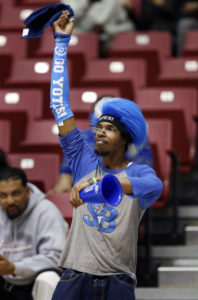 The remix of Luis Fonsi’s Despacito stops and lights finally fill the Coussoulis Arena. As soon as the referee blows his whistle to announce the start of the game, students jump out of their seats and start chanting. Mesmerized by the volume of the chants and screams and the scene of the blue waves of fans in their CSUSB sweatshirts, kids have forgotten that they have snacks in their hands. Game day has arrived.

Down on the court, there’s a man dressed in CSUSB paraphernalia – blue wig, blue cape, and blue sleeves – from head to toe. His face is painted in blue and white. It’s Coyote Man.

For years, the crusader in his blue cape has been seen at every home game, rain or shine. Pumping up the team with his chants, dancing to distract the opposing team’s players and making sure everyone around him is enjoying CSUSB athletics as much as he is, he puts a smile on everyone’s face.

This is the story of Coyote Man.

Stephan Johnson set his foot on the CSUSB campus in 2015. Originally from Pasadena, little did Johnson know that he would start his new chapter as San Bernardino’s a prominent icon of college athletics and find his identity.

It all started with his first basketball game at CSUSB. Johnson saw the team come back after a surprising rally from Cody the Coyote.

He instantly fell in love with all the game day actions, from student cheers to the game itself. Most importantly, he was carried away by Cody, the official mascot of CSUSB athletics. He wanted to be Cody and feel the adrenaline of being part of every game action, chanting with fans and encouraging competition.

This was his calling.

His dream of becoming Cody did not come true, however. He was told that only enrolled students are allowed to be the school’s mascot. And Johnson was not a CSUSB student.

He felt defeated. However, he was not willing to let go of of his dream. Johnson asked if there was any way that he could possibly entertain fans and promote the athletics culture at CSUSB. Then he was granted with becoming the school’s hype man.

This was the beginning of a Johnson’s new chapter.

Johnson’s trademark is his smile. And that’s all it takes to make him happy and spread the positivity.

Johnson never thought that he would live a life as a messenger who delivers happiness and laughter. Not ten years ago when his grandmother passed.

“[When] my grandma passed away back in 2008, it hit a rough patch between me and my mom,” Johnson reflected. “My younger brother had all this negative energy and I [had] to stay positive. So, next thing you know, my mom [was] telling me [to] ‘Bring joy. Bring happiness. Bring peace.’”

Johnson wanted to bring happiness to his mother and younger brother during their difficult times. He constantly reminded himself of the importance of staying positive and the beauty of putting smiles on other people’s faces. His positive and open mind allowed him to make himself at home in San Bernardino when he moved in 2010.

“I didn’t know anybody,” Johnson said. “I was like a nobody. Until 2015, I could change that. Turn a nobody into somebody.”

It was his determination to remain positive in all aspects of life, no matter the disaster that may come along with it, that gave him a chance to become “somebody” at CSUSB.

For the past five years, he has spread happiness and positivity around him. Anyone who has attended a home game knows the impact his smile and positive energy put on the audience.

“I feel like Coyote Man makes the games what they are,” said Marissa Zuniga, a CSUSB student and athletics fan. “He embodies what CSUSB spirit should look like. He gets everyone hyped and everyone loves him. I feel like Coyote Man brings a smile to everyone’s face with his positivity and love for our school. He does nothing, but spread love and positivity to everyone he has met… [he teaches] us a lot about how we should live our lives.” 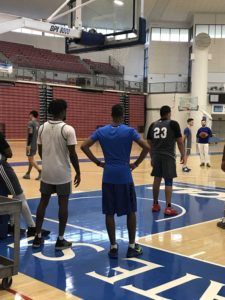 Once at a game, a child fan approached him and asked why he does what he does.

“Because I wanna bring more people to the games,” he explained to the child. “I want to do something that I can bring joy to.”

Johnson’s passion of bringing joy to CSUSB athletics and fans does not stop at games. He goes to practices to encourage and motivates student-athletes.

“I can’t coach the players, but I can [cheer them and] tell them to ‘work hard and play hard’ [by being there], Johnson said. “It’s not about me. It’s all about the team.”

Coaches and student-athletes of the CSUSB athletics department appreciate Johnson’s presence at both games and practices.

“By far [he’s] our team’s favorite guy,” said Andy Newman, the men’s basketball head coach. “He’s always happy. Always positive. I’m telling you, he loves CSUSB athletics. Every time Steph’s around, our morale goes up. He’s got an incredible, positive look on life that rubs off our our guys.”

“Man, Steph? That’s the biggest Coyote fan in the world,” said Andres Villa, men’s basketball student-athlete. “Anytime we come in feeling a little down, Steph brings us right back up.”

Despite all of the sunshine that comes from his vibrant personality, Johnson knows that the storm will come at some point. What keeps him stay motivated and passionate about what he does is staying true to himself and never flipping the script, regardless of who is in front of him.