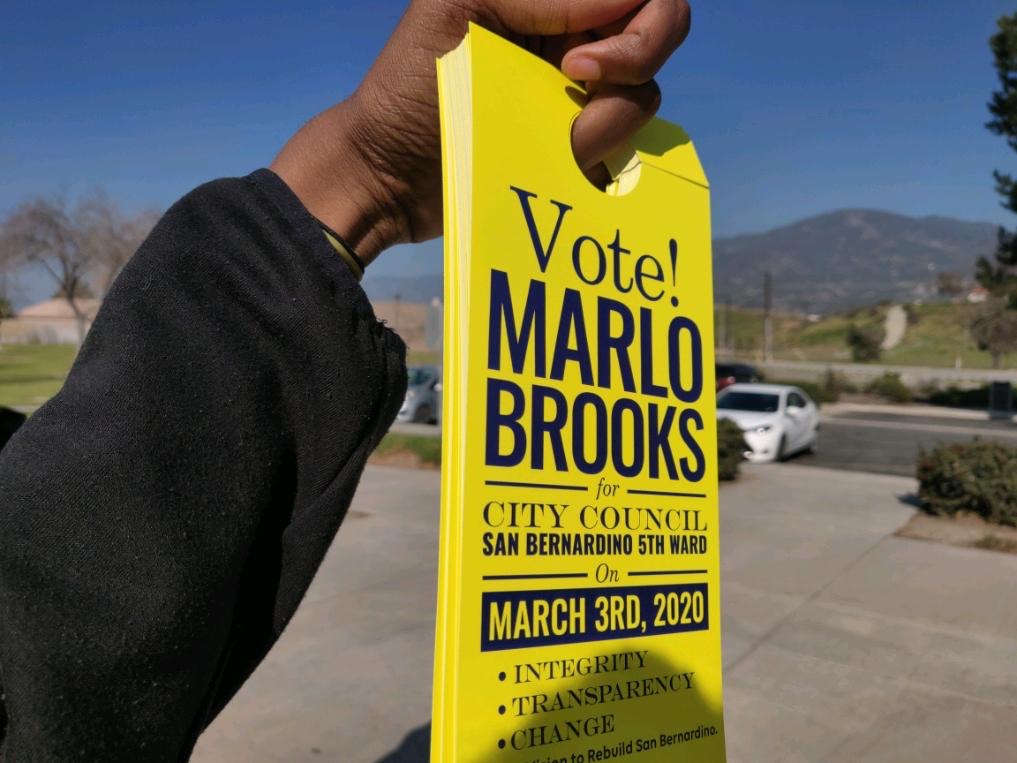 CSUSB student and prominent community figure, Marlo Brooks has decided to take his talents to the political realm and run for City Council, representing the 5th Ward.

Brooks, who is trying to balance life as a high performing student and candidate of a local city election, is an English major in his last year at CSUSB.

His pillars of integrity, transparency and change encompass his ideal vision to rebuild San Bernardino with voting taking place on March 3.

Q: Now that you are finishing your term at CSUSB, how is the transition from student to a local politician?

A: I took on that role because I felt that I had mimicked what it was to transition well, to be a responsible student and answer that call to service in regard to the future of our city. The work that we do here on campus, as far as student clubs and organizations and being a student worker, tends to bleed out into the community. With a communal role I started to develop, the call was there for me to run for city council, which was something I never saw for myself as a kid or had aspirations to do. One thing I’ve learned here was how to want for others and help others. I want to be the person standing at the helm to make sure we are transitioning and getting our youth into more prominent positions.

Q: What are some things that you have learned from this experience?

A: I have definitely learned how to follow because sometimes we think we know all the answers. I made sure to know my history and assess what the city wants and needs. I am here to collect these issues and make sure that they are moved up through the proper channels. I learned what public safety was, what emergency plans look like and the city’s general plan of action. My biggest takeaway from CSUSB has been a positive change and I want to give that back.

Q: Who has been your biggest support in this journey you are embarking on?

Q: If you were to win this election, what is the first thing you plan to do?

A: Finish school. If I win, I will be in school and a councilman at the same time. I will actually be gearing up for the next race, which is a runoff against myself and whoever else receives enough votes. I have six months until graduation and two months until elections, so it’s an uphill battle.

Q: How have you been promoting?

A: Every Saturday morning from 9:00 A.M. to 1:00 P.M. we will be Walking for Brooks. This is an event where we go out and canvass the community in the 5th ward by passing out campaign literature. We go out and meet the residents so we can promote transparency, since it’s all about them and they are the ones who vote. It’s not about who you know and who is most popular, it’s all about the residents and meeting them at their door.

Q: What piece of advice would you give to an individual who wants to run for city council?

A: This is your city. We want to see the best for this city being economic growth and development. Make sure there is a love for your community when running for this position, whether student or non-student. This isn’t a race for name recognition or trying to move up the ladder. It’s all about inclusiveness and making sure the community is involved in the changes being made.