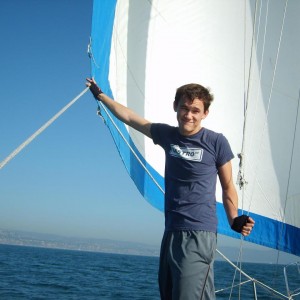 Morgan Lim went from graduating at CSUSB in June 2013 with an economics degree to being a deckhand on a boat in Alaska.

Lim’s mother, father, and brother also graduated from CSUSB. He started at CSUSB at the tender age of 16.

Lim earned honors from Hesperia High School and was eligible for early enrollment at CSUSB.

In Lim’s second year, his grades started to suffer and his GPA dropped to a low of 1.7.

Lim decided he needed to recuperate and took two quarters off from school to do some soul-searching.

When Lim returned to CSUSB, he took on his academics with a vengeance and, at the age of 21, graduated with a 3.48 GPA.

In order to increase his grades Lim said, “I had to repeat 8-10 courses.” He also landed himself on the Dean’s List.

Five days after his graduation, Lim was on a plane to Indonesia, where he spent six months learning about the maritime industry.

When he returned to the U.S., Lim found work at Kenai Fjords National Park in Alaska where he now works as a deckhand on a boat that takes tourists to see the glaciers.

His duties on the boat include cleaning and making sure the tourists are comfortable, entertained, and most importantly, safe.

Lim recently completed training with the U.S. Coast Guard on safety procedures to implement in case damage should occur to a boat.

Lim will start at California State University, Los Angeles in September, where he will start working on earning his Master’s Degree in Economics.

“I couldn’t [have] gotten through college without the support of my mom. She has definitely been my biggest supporter,” said Lim.

Lim has one piece of advice to graduates this year. “Take chances. You never know where life might bring you. Just take chances.”