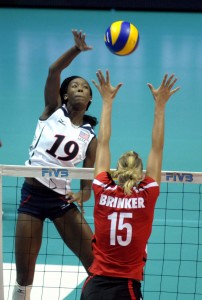 History is about to take place in the CSUSB Coussoulis Arena with the USA Volleyball Cup.

Both teams are preparing for the 2016 Summer Olympics.

The Volleyball Cup is a showcase for the national teams, playing some of the best teams in the world.

“The event will bring world-class volleyball to Southern California,” according to Eventbrite, the event coordinator.

During the showcase, USA will play China four times, starting in Hawaii, then moving to Irvine and ending in San Bernardino.

After the Volleyball Cup, the USA team will then move on to play other country’s teams, such as Italy, Turkey and Belgium, with games happening all over the world.

Tickets are available on the CSUSB athletics website, ranging from $10 to $150 per person.

This event will mark the start of the Olympic Volleyball season and we all have a chance to be a part of it.

“There are no fans in America that love volleyball more than in SoCal and this is their chance to see volleyball played at the highest level,” stated Eventbrite.

As the national team prepares for the 2016 Summer Olympics, held Aug. 5-21, 2016 in Rio de Janeiro, Brazil, we have the chance to show our support and cheer them on.