Homecoming is always an exciting event at CSUSB, but the volleyball team made it even more memorable for everyone as they swept Cal Poly Pomona in front of a crowd of 825. 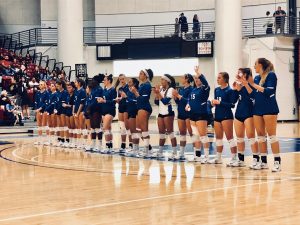 Before the game, fans had the opportunity to enjoy the Homecoming Bash at the Coyote Den. Activities included food, face painting, live entertainment, and giveaways.

As the Homecoming Bash winded down, fans made their way over to the Coussoulis Arena where they were granted free admission.

Upon entering the arena from the lobby, fans were greeted by multiple vendor tables from companies such as Mountain High, Baker’s, and the Chiangmai Muay Thai Gym (CMMTG). Fans also received a CSUSB Athletics drawstring bag.

Promptly at 7 p.m., the game was underway.

The first set saw the Coyotes trailing the Broncos 10-4, but they quickly bounced back. Overall, the score was tied a total of 10 times as the scoring went back and forth between the two teams.

The score kept going up with neither team backing down, extending the game past the usual 25-to-win rule.

There must be at least a two-point difference in the score in order for a team to win, therefore, the Broncos and Coyotes had to continue to battle through the first round, past 25 points.

Tied at 26 points each, outside hitter Dominique Sascha scored a kill. The Coyotes then scored the set-winner as Sascha and middle blocker Hailey Jackson combined on a block.

Set two was slow to get underway as the Broncos were given a delay of game penalty. However, that did not faze the Coyotes from picking up where they had left off in set one.

The Coyotes were awarded a point for the Broncos delay of game and went on to score three more unanswered points.

Throughout the set, the Coyotes never trailed, although the Broncos did tie the score up twice.

Between set two and set three, members of the CMMTG put on a demonstration on the court.

The two gentleman participants punched and kicked safety pads held by another participant to show just a few of the moves one would be taught at the gym.

At the conclusion of the demonstration, the two teams took to the court again to play the third and final set.

The third set looked like there is could be a repeat of the first as the Coyotes trailed early on. However, once they took the lead, they did not trail again.

The Broncos tied the game at 11 and then the Coyotes took off again. For each point Cal Poly scored, the Coyotes scored two more.

When Cal Poly scored two in a row, CSUSB fought back and scored three in a row.

The next point they scored would start a string of five unanswered points that would win the game.

With the win, the Coyotes record improved to 13-7 overall and 9-3 in conference play. Cal Poly’s record dropped to 9-11 overall and 5-7 in the CCAA.

The Coyotes will play at home again on Oct. 27 against Chico State and against Stanislaus State on Oct. 28. Dig for a Cure night returns on Oct. 27, where the Coyotes look to raise awareness for breast cancer.