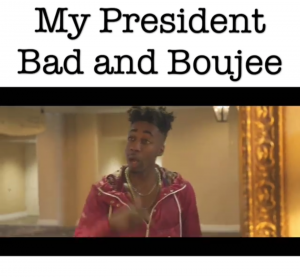 Many have used social media as a way to express their opinions about the Nov. 8 election, ranging from rants to support.

Not only have differentiating opinions cost relationships, it has also led to the inundation of fake news online, leading some people to become infuriated and distrustful of certain media outlets.

However, throughout such a national upheaval, others have decided to remain neutral and spread humor.

One individual is well-known Instagram personality “Daniel Nwosu Jr.” who goes by the username of @iamdanielnwosu.

The video is a parody to Migos’s song “Bad and Boujee,” and sequel to his previous video “Hilly Hilly Hilly Clinton.”

“I liked Hilly Clinton video, and I thought it’d be a good idea to do a sequel. If you actually listen to the video it isn’t downing Donald Trump at all. I tried to include everything neutral and show how neutral I was,” said Nwosu

The song begins with a hook mentioning a more liberal side of viewpoint explaining how there are claims that the election was rigged with help from Putin “cooking up votes.”

It then mentions that if Donald Trump cheated, then we need a round two for elections.

Because Nwosu’s lyrics seem to side with those against Trump, he said many have made comments about him being a “stupid liberal,” but in reality the video simply showcases differentiating viewpoints.

“In other videos I’ve done, I’ve always told people how we should just accept Trump as our president. At one point in the song, I even talk about how the media is never neutral and is always one sided,” said Nwosu.

The lyrics he is referring to is:

Watched the news I bet they fooled ya.

What they feeding is us crucial,

And we eating on the usual,

My prezi bad and plus he boujee,

The system April but can’t fool me,

Hacking on hackings, the safety is lacking.”

Nwosu is questioning the media and their intentions.

For those wondering what the term bad and boujee means, Urban Dictionary defined it as “An abbreviation of the French “bourgeois,” a critical term used to describe people, things, and places that are definitively high-class.”

It also describes someone who is “flossin’, ballin’ [and] one who possesses swag; elite, rich”.

“Our president is bad and boujee because of some of the slip ups he’s had in the media while still wanting what’s best for the country. He has said almost childish things in the media and doesn’t care.  I think he’s pretty dope as a president, he’s just done so many crazy things,” said Nwosu

Nwosu believes that Donald Trump is one of the most “interesting” presidents we’ve ever had.

Others have told Nwosu that regardless of viewpoints, the video is “lit.”

The video captivates some of its viewers due to the visual elements that flow coherently with the words.

In one scene, there is a close up of the Trump Towers, and in another a Washington Post news article about a CIA assessment on Russia helping Trump win.

Since the video was first posted, it has received over 33,000 views on Instagram and as well as over 100,000 views on YouTube.

Nwosu hopes to open the eyes of the public, but overall he says that “It’s really just a parody. It’s not meant to be inspirational, but it’s definitely a creative way to show a neutral side to all of this.”