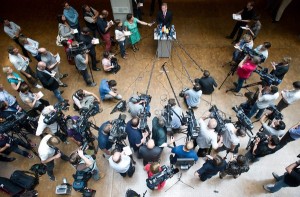 Recent relations between Germany and the United States have been compromised due to allegations blaming the U.S. of espionage.

With the last major case of Edward Snowden releasing NSA documents and U.S. servelillance on phone and internet communications to the public just this last year, the United States is now being accused of espionage.The allegations were revealed to the public on Thursday, July 3 by the German government.

The New York Times writers Alison Smale and Melissa Eddy report that Germany has requested the expulsion of the U.S. intelligence services’ representative of the United States embassy in Germany.

These recent situations have created an outrage within the German government since the United States government revealed that they had tapped into Chancellor Angela Merkel’s cellphone last summer.

President Barack Obama has assured German officials that the American government will no longer spy on German leaders such as Chancellor Merkel.

Chancellor Merkel stated in a press conference, “spying on allies is a waste of energy in the end.”

Clemens Binninger, member of Chancellor Merkel’s party, stated that the United States has been asked to leave the country so the German government would be able to complete their espionage investigation.

The United States government has not yet released a statement about the expulsion request, although the United States embassy stated it is essential to cooperate with officials to maintain close relations with Germany.

The names of spies have not yet been released, although had fed 218 documents of five large files from the German government to American agents.

Germany made the statement informing intelligence representatives to leave the consulate, pending further discussion with the American government.

Within the last few years, the American government has made more spy attempts on other countries as well as their own.

Discussion of whether or not the representative of intelligence will leave from the U.S. consulate in Germany is still unsure.