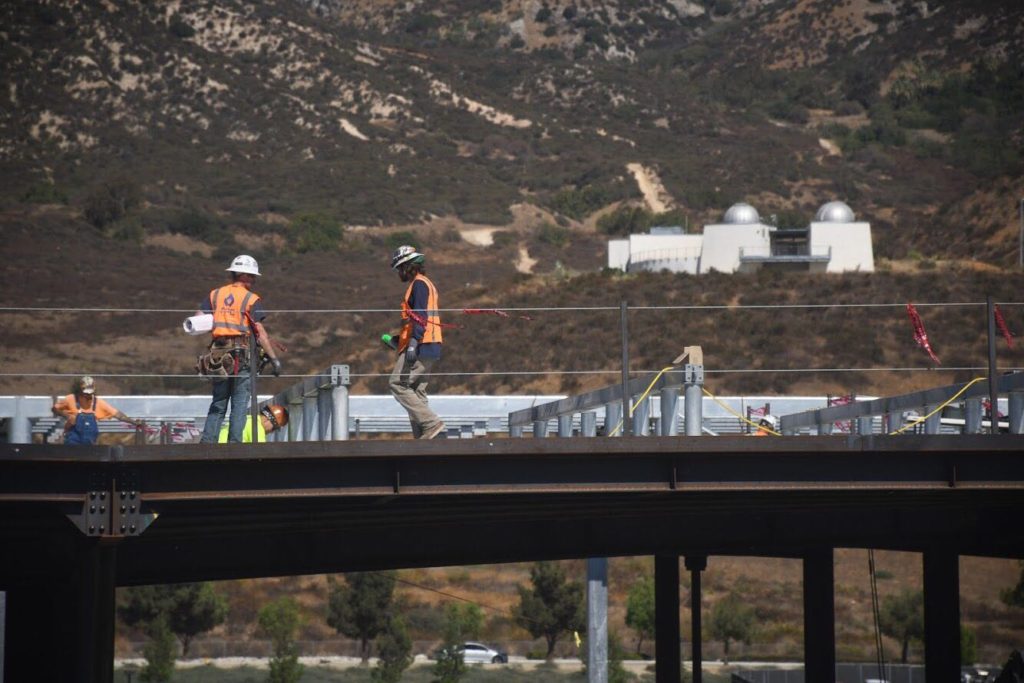 Through the disrupting noise of the ongoing construction, students await the completion of the new structures.

The new Center for Global Innovation Building costs $55 Million upon completion. The new building originally started as a smaller project focusing on English language students according to Tatiana Karmanova, dean of CSUSB’s College of Extended and Global Education and Vice President of International Education.

CSUSB organized focus groups for students, faculty, and staff in order to fully grasp the needs of everyone for the new building. Karamanova raised the question of “What is important for you?” during these focus groups which led to the current design of the CGI building.

Since these focus groups not only involved students but also involved faculty opinions interviewing the Faculty Senate on campus was a necessity.

“If they’re going to spend this type of money that tells me it’s very very important to everyone involved,” said Myers when asked what she thought of the total cost of the CGI building.

Although the cost of the CGI building might be expensive some students do not mind the expansion of the campus even if it means raising their tuition to fund it.

Kris Hardin, a second-year student at the CSUSB campus, estimated the cost of the new CGI building at 50-75 million dollars and has no issue if his tuition is being used to fund the construction. He even referred to himself as a super liberal snowflake who does not mind his money being used to benefit the future.

“I have no problem with my money being used to help expand opportunities,” said Hardin.

The focus groups results for the CGI construction listed the need for spaces such as home away from home and social place.

“They wanted not just classroom space, but students really wanted to see a space where they could interact with others,” said Karmanova.

Ole an international student from Nigeria also commented on-campus construction and compared it to that of his native country. Ole reflects on how loud construction is back in Nigeria due to the workers constant yelling compared to the CSUSB’s quiet construction workers.

“In Nigeria, they would increase school fees even if it is just a new toilet there will be an increase in school fees,” said Ole when asked if raising tuition to help fund school projects would bother him.

He went on to describe that his fees for college back in Nigeria would increase even if there were no new additions to the campus.

“If there is an increase in school fees there should be something to show for it,” said Ole.

Students can rest easy when it comes to new structures on campus because a common misconception that our tuition helps fund these projects was debunked by Karmanova when asked how the CGI building was funded.

“The College of Extended Learning is a self-support unit. We had to demonstrate to the chancellor before they approved the building that we had money to pay for it,” said Karmanova.

Karmanova even compared to paying for the building like a house. The College of Extended Learning had to put down a down payment and will be making payments until it is paid off.

In the past couple of year’s construction has been prevalent on the CSUSB campus.

CSUSB has recently completed numerous projects from the library stairs, the new commons, piping all around campus, the new student dorms, however; one project is still not finished after breaking ground in December of 2017.

The CGI project grew because the campus was deciding its “master plan” for the entire CSUSB campus according to Karmanova. The master plan showed the need for all students to have more space.

Although student Kris Hardin is all for expansion of the CSUSB campus he commented on how he wishes the school would use some money to renovate University Hall a building he described as one of the most run-down on campus. A building that is important to him because of his major.