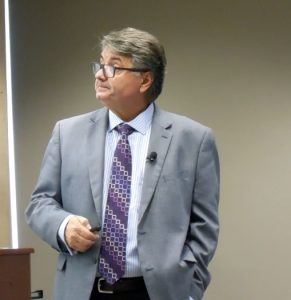 Underrepresentation of women in Computer Science and Engineering was the topic of discussion in the Pfau Library on Thursday, Oct. 19.

Women have the capabilities to possess every learning experience in their field of study. Every day women learn, grow, and focus to become who they are capable of being and education plays a huge role. Women want to achieve their goals and go out into the workforce and expand that growth and knowledge further.

A very important presentation was given by Dr. George Geogiou.  This presentation brought awareness to others who may not know what may be happening to women in these specific fields and why the percentage rates of women getting degrees in this field are low.

Dr. Geogiou, a professor of Computer Science and Engineering, spoke on reasons why women are underrepresented in the field. In a brief powerpoint presentation, he discussed some factors.

Factors discussed included the culture of computing, lack of mentoring opportunities, gender specifics, and large introductory weed-out courses. A statistic presented on the powerpoint showed that eight percent of the degrees in Computer Science and Engineering went to women in 2015-16.

Dr. Geogiou discussed what CSUSB has done to implement strategies and also discussions about redesigning the course. “A number of female students were sent to the Grace Hopper conference with the help of Dr. Morales. We have had discussions in the department to switch to python and those discussions are ongoing,” said Geogiou.

As the discussion continued, the powerpoint showed that female students at Harvey Mudd college had a higher percentage rate at 55 percent. Reasons for this are cited that students participated in the Grace Hopper celebration of women conference, and they were able to get the first year of research experience.

The factors discussed concluded that with extensive studying, and participating in introductory courses, they can increase the percentage rates.