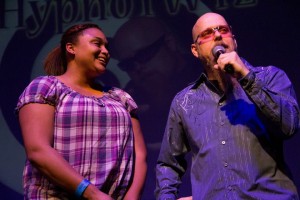 The show was presented by the Program Board of the Santos Manuel Student Union. It was a very successful show to say the least because the Events Center nearly reached capacity for those waiting for a little something called hypnotism.

“If you plan on participating in the show, I’d advise you use the restroom now,” echoes a calm, yet stern voice.

Meet Twy, a certified hypnotherapist. His chin shoots out a long, pointy beard, eyes sheltered away from colored shades and a head as bald as an eagle.

Twy convinces the crowd that his will be no ordinary show, that this will in fact be something for all to remember, or maybe just some will remember.

Twy began the night with what he likes to call, “HypnoTWYz.” Roughly 14 volunteers are brought to the stage. One by one, Twy asks them a single question before starting, “Are you ready to be hypnotized?”

As everyone relaxed in their stage seats, soothing music began to surround the room, drowned with the very smooth, calm voice of Twy himself.

The participants were to continuously breathe in and then breathe out. Breathe in, breathe out, sounds simple enough.

Slowly but surely, you see the victims. You notice the falling heads and the collapsing bodies. You start to wonder if any of this is real or not.

“I felt like some of the people that were chosen to be on stage were actors and or actresses,” says student Sebrena Thurton.

That was the thought that started to cross a lot of people’s minds at the beginning of the show, some even for the whole show, as they were not easily convinced that this could actually be happening.

The stage and parts of the crowd are now covered with bodies and Twy now has them in the palm of his hands.

From here on out, they were to be where he wanted them to be. Whether if it was on a sunny beach in Hawaii, or in a blizzard. They became America’s Next Top Models, some even pop stars.

These volunteers were no longer themselves. They were puppets dancing for fake money and competitions, partying where there was no real party. The entertainment was at an all time high. 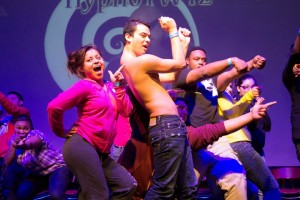 Senior Myriah Ball stated, “It was unbelievable. I couldn’t believe how some of the participants were acting. The show kept me laughing the whole time.”

Not everyone was laughing however. “I wished to see real things. Some students were clearly acting,” says student Sierre Rogers. “Most likely won’t go to another one.”

Senior Jeremy Young even thought of it to be just “Okay,” as he believed it was, “all fake.”

Nevertheless, there were still many believers in the audience. After being snapped back into reality, some of the participants may fall in that category as well.

Call it the TWYlight Zone; CSUSB was under a spell that memorable Thursday night.

Students will be looking forward to another hypnotic evening soon.

Clearing all of your questions about shapin' up
Palm Springs Bus Crash Leaves 13 Dead, 31 Injured
Off campus mini-career event