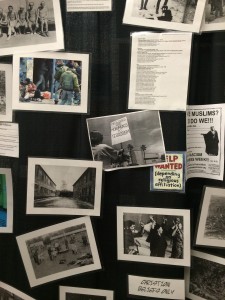 As you enter the Tunnel of Oppression, you begin to see the different types of oppression people go through each day.

On the first day, also know as the “active” day, the tour had actors in each section of oppression, which made the experience more personal.

This allowed the audience to sympathize with people who have been subjected to some sort of physical, mental or verbal abuse because of their identity.

The second day was “passive,” allowing attendees the chance to read the different articles and view the pictures through the tunnel.

Before entering the “Tunnel,” participants were handed blue boarding passes.

While waiting, they were baffled as to why they were handed boarding passes if they were just going to go through a tunnel.

The tour began, and we made our first stop. We were told to make two lines as if we were about to board an airplane.

Two young women began to collect the boarding passes, and as they reached the end of the line, they began to scream and harass a young lady of Middle Eastern descent.

They were being very rude to her, they ganged up on her and began to yell and question her just because of the way she looked.

The woman of Middle Eastern descent tried to make them understand that she was just like the rest of us trying to get home to the U.S.

The women playing the airport security refused to listen and kept harassing her as they took her away from the group.

I felt hopeless when they were yelling at her for just being a certain race. I knew they were actors, but I have never been in that situation.

It was an eye opener for me to see someone be so rude simply because you are not like them.

Student Nathan Arrango said, “I was really surprised when they called out the Middle Eastern girl who was just trying to go home to her country.

The two airline securities had no right to decide she was not American just because she did not have white skin. I still can’t believe people judge others based on skin color and ethnicity.”

The section of the Tunnel of Oppression that really made me feel horrible and realize how much words can hurt showed stories of people with disabilities.

Student Ashley Brooks also said she was most affected by the intolerance shown for people with disabilities.

We were asked to huddle around a shattered long mirror in the middle of the floor and stare at our broken reflection while an actress began to shout at us.

She shouted at us as if we were the ones with disabilities.

Her persona was a frustrated angry person fed up with people with disabilities.

It made you feel horrible because you realized people with disabilities get mistreated for being themselves.

No one chooses to have a disability, yet they get abused for having these disabilities and being different than the rest of us.

The walls were covered with pictures of people with different disabilities and deformations with a brief description of how they’ve been oppressed.

The goal for this event was to inform people on the many different oppressions people undergo.

The Tunnel of Oppression continues to affect students every year with the shocking information presented.

We are all oppressed in different ways, but it’s important to acknowledge that others go through the same thing too. We should not encourage oppressing others and instead be more considerate to their differences.