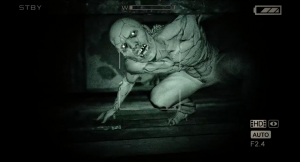 I’ve disconnected myself from the real world, turned off the lights, and raised the TV volume. I’m petrified.

Yet, I can’t look away while being on the edge of my seat and barely able to hold the controller.

“Outlast” is terrifying and one of the most original survival horror games in years, I definitely give it a four out of five rating.

This game provides a different spin as there aren’t any weapon upgrades, items, skill set attributes or even the ability to fight back.

Your only options are to run, hide, or die.

There are pacing drawbacks, the second half is not as good as the first, and some might not like the system of not being able to fight back but this doesn’t take away anything from the experience.

Outcast scares the living hell out of you.

You play as an investigative journalist (Miles Upshur) whose task is to investigate an asylum called Mount Massive after receiving an anonymous tip.

Miles is always willing to risk finding stories that no other journalist would dare to investigate and apparently there is a dark secret at the heart of the asylum that could be the story of his career.

Equipped with only a video recorder that can toggle night-vision on/off that runs on batteries, you must record everything.

The game doesn’t try to scare you with cheap tricks; instead, it terrifies you in its own way.

“You won’t know what is coming and when you think you do, it’ll fool you and scare the shit out of you,” said student Reece Cote.

The music gives you the feeling that you’re in a horror film with its ambient noise. You can hear your character breathing heavily after a near sticky encounter.

The gameplay makes you feel like you are playing like an average human because all you can do is run, climb, crawl, and peek from corners.

To avoid enemies your best options are hiding under beds, inside lockers, stalls, or in dark corners.

Time is spent activating switches, looking for keys and security cards to get to the next area to either uncover another note or find a way to get out while avoiding everything at all costs.

Lights will turn off out of nowhere and doors will shut randomly. The game transitions will switch from locations to puzzles.

When you think you are confident enough to keep venturing through without fear, the game throws a curve ball at you and makes you think quickly on your feet.

Most of the asylum humanoids are treacherous and evil, but some are more scared than you are, while others walk around without a care which looks harmless then all of a sudden they jump at you.

You feel a sense of accomplishment when you play the game without dying for a while.

“The game is not easy and I felt that was a good thing. It’s not too hard either, just about right,” said Cote.

The things you hear are extremely important so your ears are one of your most vital tools next to your camcorder.

A possible drawback is that you can’t fight back, usually putting you in situations where if caught and can’t run away, you’re going to most likely die. This puts you through trial and error situations which can take away some surprise when you restart the scenario.

Having the ability to fight back with things as simple as a flashlight, pencil, dust to blind the enemy to run away to restart would have possibly been suffice, but this part is mostly up to preference as some may enjoy it how it is.

It’s an indie game that is free with PlayStation Plus or $20 without. It’s a little on the short side (around 5-7 hours). There’s not many games that actually hit the scare factor in survival horrors, but this one perfects it, so don’t miss out.