Loving your body can be a challenge as many women from around the world have suffered from body shaming that has taken place in the media, online, or in person.

Starr Booth, an assistant of the Women’s Resource Center hosted the “Body Empowerment Week: Love Your Body Now” event on February 18, 2020, which garnered the attention of the women on campus and prompted them to love their bodies and spread positive body empowerment by doing activities centered around body image insecurities that focused on learning to love their bodies. 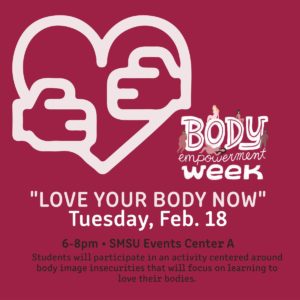 At the start of the event there was an activity that the participants were required to do as an icebreaker called “The Line” where a set of participants were asked to stand on a line and when the interviewee asks questions pertaining to the subject. In this case questions about body empowerment were asked such as: “Has the media ever made you feel bad about your body?,” “Have you ever been self-conscious about your body?,” and “Have you ever felt the need to change your body based on the opinions of others?,” If a participant related to the question asked then they would step forward and look around to see if anyone else related to this question as well.

“The Line” made participants feel safe and inspired them to become positive with their body insecurities and feel comfortable as they saw that they weren’t alone in their insecurities.

Syerra Gardner, a freshman in Social Work, said, “I learned that there are a lot of insecurities in women that really don’t like their body that I did not know prior to coming to this event and it made me want to embrace my own body as well.”

Jamie Reeve, a junior in sociology, commented, “During this activity, I realized there were so many insecurities similar to mine and I never thought my insecurities can be considered beautiful until seeing so much positive affirmations about them.” 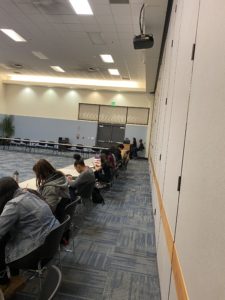 Booth stated, “Never let someone make you feel like your insecurities are bad, and that do what makes you feel comfortable in your skin.”