Student volunteers directed the show for a few years until they graduated.Later, Dr. Gallegos, a professor of Communication, spoke to Kendall and asked if there was a way to involve her students in a journalist media broadcast experience.

“She was the one who brought it back to life and told me, how about instead of sending you two students, I’ll put the whole class on task,” said Kendall. Soon Kendall and Gallegos started collaborating together on Coyote Radio en Español, which is now broadcasted live every Wednesday from 6–8 p.m. Gallegos has taught Spanish for the Professions 316A course in the past. Three years ago, she decided to implement the Service Learning component.“Students who are studying Communication or Spanish have the option of taking courses under the Communication track, so this course offers students the opportunity to experience firsthand what it is like to be a radio broadcaster,” said Gallegos. Students are required to do 10 hours of Service Learning activity at the Coyote Radio Station, where they prepare and organize their radio program whichever topic they choose. Alba Valdez is a fourth year student currently taking Gallegos’s class and enjoys the radio program. “Being part of the radio through the Service Learning is a great experience. Not only am I involved in a school activity, but I will also gain experience for the future in the field of communication,” said Valdez. Ever since the program started, some students have gotten jobs within the radio business or have been encouraged to do so, according to Gallegos.“With my involvement in this program, I plan to gain experience since I eventually want to become a radio host for a Spanish broadcasting station in the Inland Empire,” said Valdez. The program is two hours, which gives each student an hour to present topics including important news issues, pop culture, or even sports. “They learn how to organize that time whether it’s one or two hours, taking into account the breaks for commercials but beforehand, they have to prepare a script to fill that time with whatever topic they’re going to present,” said Gallegos. 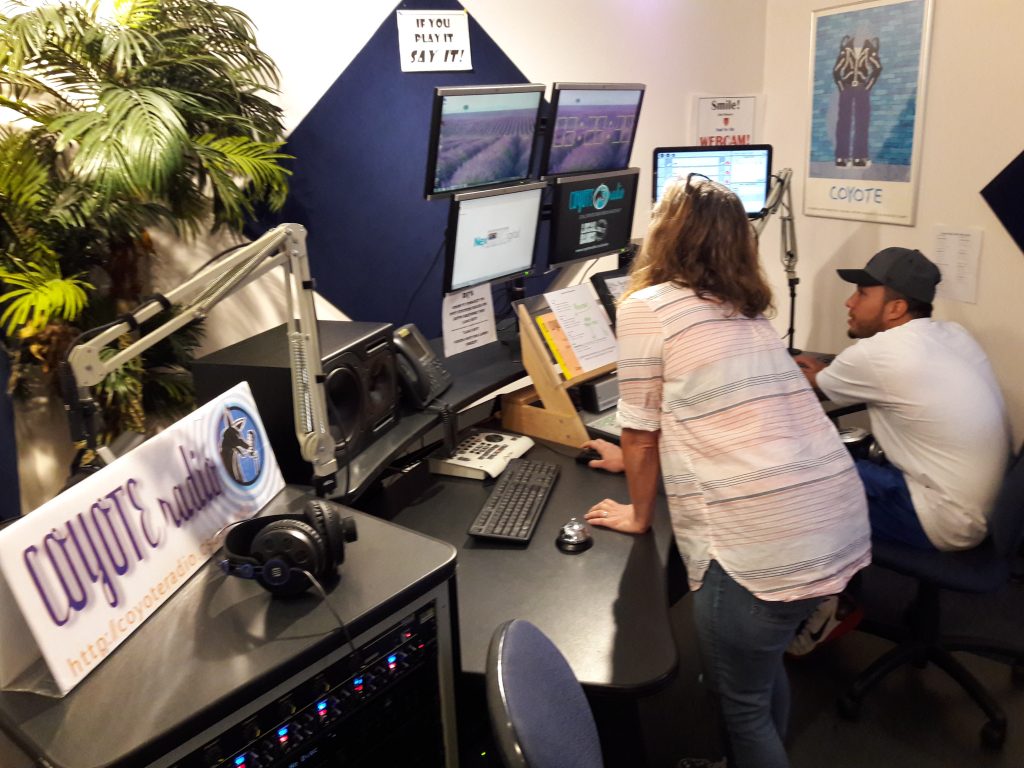 This year the program is also offering the option of doing a podcast in the form of a public service announcement from CSUSB as part of the Service Learning Activity.Gallegos works with students on their scripts while Kendall helps them with the technology in the radio station. “This could not have been possible if Lacey hadn’t given us the support,” said Gallegos. When Kendall realized that there were more Latino students in CSUSB than any other ethnic group, she told herself that there needed to be a more prominent Latino voice for the campus, since it couldn’t be all English programming. “If every other thing in this radio station was to fall apart, I would want Coyote Radio en Español to go on forever,” said Kendall. Kendall remembers when Gallegos stepped into her office and told her about the idea of doing the radio in Spanish. “Dr. Gallegos is a phenomenal professor,” said Kendall. “When she came in here, she didn’t even know how to do this, but she knew that it was important that it be done.” With the support of each other, they were able to create Coyote Radio en Español and improve the program throughout the years. “She cared so much about her students and wanted them to not just be in her class but to have an extremely meaningful experience; that’s why she was so passionate about it,” said Kendall. Kendall believes the program is a completely meaningful experience and that she will fight for it, now more than ever. “I fought for it when it was just two students, but now that Gallegos has put her forces behind it, it’s an important program, even more than it was years ago […],” said Kendall.

Kendall and Gallegos hope to continue the program as it has provided different opportunities for CSUSB students.

Studying abroad enriches student knowledge
Stepping out of the desert and into the real world
The history behind San Bernardino native Jack H. Brown