Some of the most memorable award shows have come and gone, but nothing compared to this year’s Oscars.

The 86th Academy Awards was held on March 2, at the Dolby Theater in Los Angeles.

The Academy Awards, commonly known as The Oscars honored the actors, technical achievements, and films of 2013.

Ellen successfully brought her infectious personality to life, and kept the audience actively engaged in every aspect of the ceremony.

This year’s show continued on its climb to higher ratings, reaching the highest rating in ten years with an average audience of 43 million viewers in the United States. 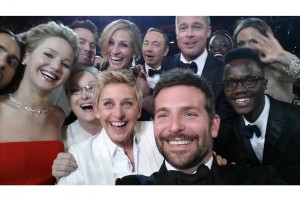 The Academy Awards has continually been recognized as the year’s number 2 television event behind the Super Bowl.

Surprisingly enough, many award shows have received an overwhelming amount of rating resurgence, many have attributed this to the rising popularity of a so-called “social television” trend.

DeGeneres took full advantage of this recent trend by establishing the goal of creating the most-retweeted photo ever on Twitter during the show.

Twitter reported, “The photo registered upwards of 14.7 million messages about the telecast on Sunday night.”

Student Marisa Damron said, “I thought Ellen DeGeneres made the show more exciting than it has ever been in the past, and I must admit I was one of the 14 million people who retweeted her photo.”

“Gravity” won seven awards, the most for the ceremony, including Best Director for Alfonso Cuarón.

Other winners included “Frozen” and “The Great Gatsby,” with two awards each.

DiCaprio has been nominated for an Academy Award three times in past years, all of which he has gone home empty handed.

Many fans have said this would be his year, with his fourth nomination rolling in and his top-notch performance in “The Wolf of Wall Street” film.

DeGeneres continued to keep the audience upbeat and entertained throughout the night, and one of her best moments involved a pizza delivery man arriving with several pies to hand deliver to several A-list stars in the front of the audience. 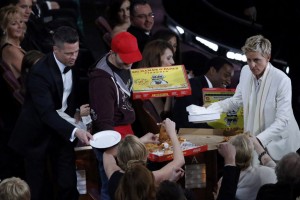