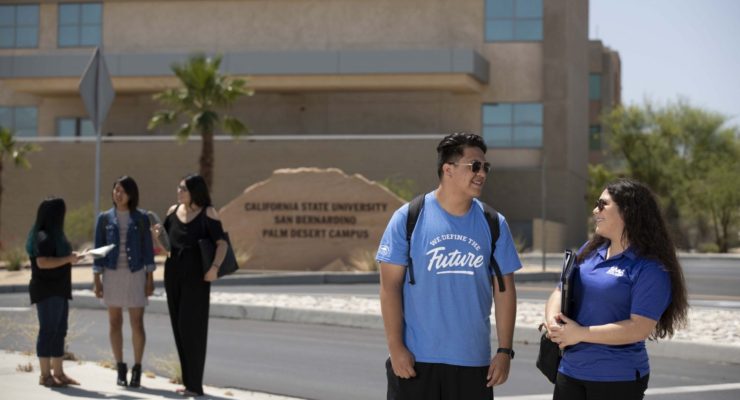 Working students of the Palm Desert Campus (PDC) shared the changes in their time management caused by the shift to online learning. “I used to work two jobs and now I only work for one, which is for our school,” says Vianey Abraham, a fourth-year communications studies major. Abraham said, “I worked for a small business in Palm Springs, but since we were all too exposed to the virus, everyone had to stop working in that area. My family got paranoid, so they told me to not return to work. They wanted me to stay home safe and healthy.” The paranoia over the pandemic caused millions of Americans to quarantine while simultaneously being at risk to lose their jobs. “It didn’t … END_OF_DOCUMENT_TOKEN_TO_BE_REPLACED

By Estefania Torres |Asst. A&E Editor| Summer is a time when students are looking forward to fun vacations, cool vibes and no school. Not many students take into consideration that this may be the perfect time to start being productive and begin building a résumé. It is crucial to continuously be active in the field one plans on working in, especially during a long break. By this I mean, if one is going to be spending about three months sitting around, watching television and doing nothing, might as well do something productive that will help in the long term. An internship is always a great start in constructing your future résumé; the résumé that will be presented to … END_OF_DOCUMENT_TOKEN_TO_BE_REPLACED

By Estefania Torres |Asst. A&E Editor| Social media has become a significant part of our everyday lives. It has become so significant that it has unfairly become a platform for employers to evaluate an individual’s professionalism and credibility. Social media is a personal, and at the same time free space to express oneself in any way he/she chooses to express him/herself. And no company or businesses should hold it’s employees accountable for the things they post outside of work—they should not determine a person’s competence and skill off of something they are not a part of. An annual social media recruitment study shows that the percentage of employers that check employees … END_OF_DOCUMENT_TOKEN_TO_BE_REPLACED

By Estefania Torres |Asst. A&E Editor| College education is one of the most talked about topics among young adults. High school graduates are usually faced with the hard decision of either getting their degree or going straight to work. Some people argue that education is needed to make a decent living, while others believe that education is a waste of money and time. In the economy that we live in today, an education is needed to live a comfortable life. "By the year 2020, 65 percent of all jobs in the economy will require post-secondary education and training beyond high school," according to a report published by Georgetown University Center on Education and the Workforce titled … END_OF_DOCUMENT_TOKEN_TO_BE_REPLACED

By Sandy Rodriguez |Staff Writer| Restaurant industry jobs seem to be the top employment industries for students because of the large range of said establishments around college campuses and the flexible hours.   Life is expensive, more so for students who have to buy textbooks, parking permits, and all those energy drinks to stay up for all-nighters. We all need money, and those of us who lack a strong financial support from our families have to find jobs in order to make ends meet.   Chemistry major and Amazon employee, Alex Guerrero said there aren’t enough hours in a day. Guerrero said he gets paid $12.50 an hour, $3.50 above minimum wage in California. This may … END_OF_DOCUMENT_TOKEN_TO_BE_REPLACED

By Jacques Lee |Staff Writer| Personal trainers work with their clients to get maximum results in physical and mental health through the means of fitness. Here at CSUSB, the Student Recreation and Fitness Center (Rec Center) offers students a chance to get in shape with the aid of a personal trainer. If you want to become a client to one of these trainers you do have to pay a price. There are different price scales set up for one-on-one sessions with trainers based on the amount of hourly sessions that you want to book. For a bulk of four sessions, it is $20 a session; if you want to bulk together five to nine sessions, it is $18 a session; and if you want to bulk together 10 … END_OF_DOCUMENT_TOKEN_TO_BE_REPLACED

By Samantha Romero |Staff Writer| Forty percent of Coyotes claim to have sleep deprivation. When we were younger it was a constant mantra held by our parents that we needed our sleep and now that we are older, scientists are telling us we need sleep. Study after study has come out describing just how sleep deprivation affects students in their day-to-day work. A study done by the National Sleep Foundation said that "'young adults'—a new category for ages 18-25—may be able to get by sleeping 11 hours a night." But which college student can actually achieve that? Most college students ignore the fact that they are sleep-deprived, saying school work needs to be completed or … END_OF_DOCUMENT_TOKEN_TO_BE_REPLACED

By Davon Dean |Staff Writer| CVS and UPS made headlines in President Barack Obama’s State of the Union address. Obama said that he needs more companies and employers to be like CVS and UPS, who both offer a variety of educational benefits and paid apprenticeships. “Tonight, I’m also asking more businesses to follow the lead of companies like CVS and UPS, and offer more educational benefits and paid apprenticeships,” said Obama. According to the UPS website, the company offers different programs and incentives for employees to be successful. Some programs include: UPS tuition program, health and wellness program, compensation saving program. CSUSB students agree that … END_OF_DOCUMENT_TOKEN_TO_BE_REPLACED

By Jacques Lee |Staff Writer| Hard work and the desire to win can be easily seen on the basketball court by Taylor Statham, but behind the face of the fierce warrior is a humble young man. Statham, a 22-year-old Los Angeles, California native is in his senior year and captain of the 2014-2015 men's basketball team. After graduating Golden Valley High School in Santa Clarita, Statham attended Cal Baptist University on a full basketball scholarship. After a year of playing with the Lancers, Statham transferred to CSUSB feeling it would offer him an opportunity to play more minutes per game. When asked about the transition from the Lancers to the Coyotes, Statham said, "It was … END_OF_DOCUMENT_TOKEN_TO_BE_REPLACED

By Jorge Campos |Staff Writer| President Barack Obama has officially proposed to make community colleges “virtually free” for anybody who is willing to work for it. This economical help will only benefit students who graduate high school with a GPA of 2.5 or higher. His plan, the “America’s College Promise”, will encourage students to maintain good grades and reach for a high school diploma. “Given that this is Obama’s final State of the Union Address, it was likely that he was trying to define his presidential legacy with this speech. In theory, it is of course a good idea but if it increases national debt then I would give the plan a second look,” said CSUSB’s Political Science … END_OF_DOCUMENT_TOKEN_TO_BE_REPLACED