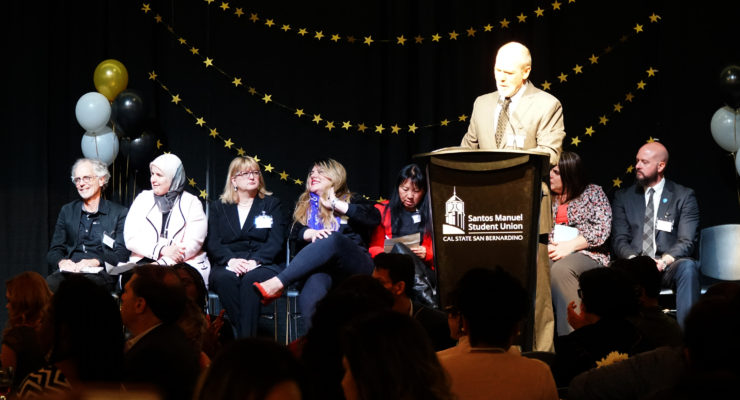 On May 1, the Communication Studies Department held an all-day event that included the presentation of student awards and discussion panels. The panels started early at 9 am in the Santos Manuel Student Union Theater. The panel held alumnus that come from different aspects of the communications field, from television to public relations. They touched on subjects about public speaking, how to network, where to get confidence, and mostly; how to get from where the students were sitting to where the panelists were sitting. “Confidence comes from two things: first is preparation. Do your homework in advance, second is practice. The more you get out of your comfort zone, the easier it … END_OF_DOCUMENT_TOKEN_TO_BE_REPLACED

By Andy Quintana |Staff Writer| Lights, camera, and 48 hours. CSUSB students received honors and awards in the area of creating a short film; and the kicker is that they only had 48 hours to work. The 48 Hour Project competition brought together the Inland Empire filmmakers to create a short film, given guidelines and specifications. The project concluded on Wednesday, Sept. 25, with a small award ceremony that took place at a coffee house, Back to the Grind, located in Downtown Riverside. Out of the 25 films nominated, two awards Best Director and Best Cinematographer, as well as one runner up, the Audience Award, were handed out to students from CSUSB. Best Director … END_OF_DOCUMENT_TOKEN_TO_BE_REPLACED