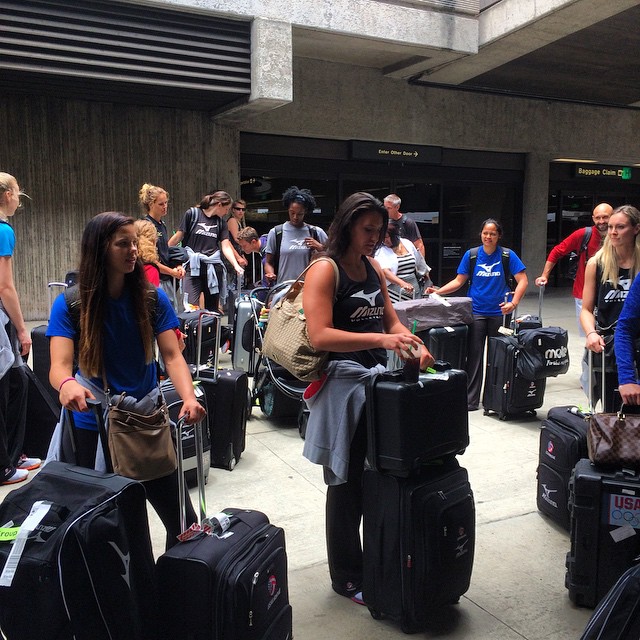 By Shelby Hancock |Asst. Sports Editor| History is about to take place in the CSUSB Coussoulis Arena with the USA Volleyball Cup. The No. 1 USA Women's National Team takes on the No. 3 China team on June 12, 2015 at CSUSB. "USA overpowered China 3-1 to collect its first-ever title at a triple crown event," stated the CSUSB athletics homepage. Both teams are preparing for the 2016 Summer Olympics. The Volleyball Cup is a showcase for the national teams, playing some of the best teams in the world. "The event will bring world-class volleyball to Southern California," according to Eventbrite, the event coordinator. During the showcase, USA will play China four times, … END_OF_DOCUMENT_TOKEN_TO_BE_REPLACED

Shane Burrell |Sports Editor| The Sochi Winter Olympics comes to its final week, ending the events and preparing for the closing ceremony. At the time of publication the United States are in the lead with a 23 medal count, followed by Russia and the Netherlands tied at 22. These great achievements have been made possible with the unconditional support from fans and fellow USA team members. Although team USA is in the lead with team medal count, there is one team member that would fall somewhat short in his expectations in earning the gold. Shaun White planned to participate in the new Slope Style event, and the half-pipe, which he has won two gold medals for in past … END_OF_DOCUMENT_TOKEN_TO_BE_REPLACED

By Uriel Ortega |Staff Writer| The U.S. strikes gold first at the 2014 Winter Olympics in Sochi and 12 total medals through in the seventh of the winter games. U.S. team nabs first gold as both men and women sweep the gold for slope style snowboarding at the 2014 Sochi Winter Olympics. The United States claimed the first gold in the slope style with a big board and big tricks by Sage Kotsenburg, who won the game’s first gold medal. Kotsenburg, from Park City Utah, said that witnessing the American team sweep the men’s half pipe podium at his hometown Olympics in 2002, was a defining moment for him. “I have no idea what’s actually going on, this is the craziest thing that ever … END_OF_DOCUMENT_TOKEN_TO_BE_REPLACED

By Britney Carter |Staff Writer| The weekend before Valentine’s Day, Middleborn showcased her talents to several coaches of the U.S. Olympic volleyball squad in hopes of making the team. Samantha Middleborn has been a key component to CSUSB’s volleyball team throughout her illustrious career. Her talents are innumerable, her potential is limitless and her passion is electrifying. After leading her team to an undefeated season and all the way to the final game in Nationals, many people wondered what would be next for Middleborn. Now we have learned that Middleborn plans on taking her talents to the London Olympics. Middleborn is currently a senior at CSUSB and has had an … END_OF_DOCUMENT_TOKEN_TO_BE_REPLACED