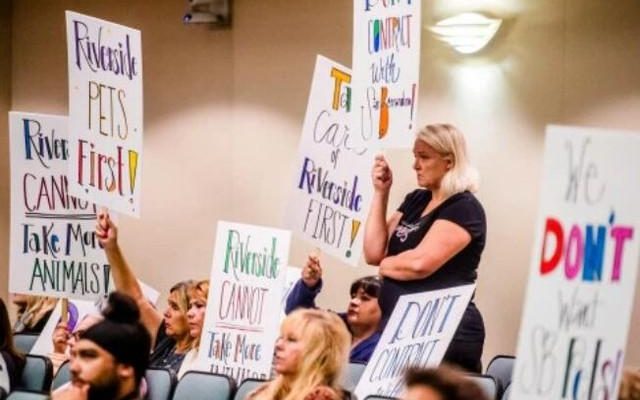 The San Bernardino City Animal Shelter held a free adoption event on May 9. Adoption fees were waived to those who wanted to adopt a cat or dog. These events always worry volunteers and residents because of the number of animals that are returned in the following days. In fact, not long after the event, one of the male pit bulls that had been adopted, shelter ID #a522999, was being given away for free on Facebook. The next day, many news outlets excitedly announced that the cages had been cleared. This is not the case. As of May 10, according to the shelter listings on petharbor.com, there are still 73 cats and 54 dogs at the San Bernardino City Shelter. Many of these … END_OF_DOCUMENT_TOKEN_TO_BE_REPLACED

By Carley Bennecke |Staff Writer| The Coyotes’ women’s water polo team suffered two losses at the Whittier Aquatic Center on Feb. 8. They battled in their first 10:20 a.m game against Pomona-Pitzer College. Coyotes were down 6-1 after the first period, and 11-4 at the break. The Coyotes lost by over 10 points: Pomona-Pitzer 17, Coyotes 6. Junior goalkeeper Madison Morris had three saves in the first half. The game remained one-sided throughout as the Coyotes struggled. The Coyotes’ second game was later in the afternoon on the same day. The Coyotes competed against Occidental college and took another licking, losing 5-10. Occidental 10, Coyotes 5. The match began as a … END_OF_DOCUMENT_TOKEN_TO_BE_REPLACED