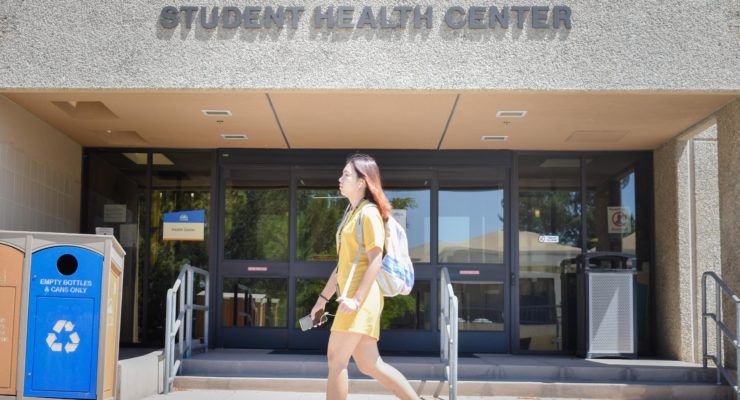 The CSUSB Student Health Center is an integral part of Cal State San Bernardino. Campus health centers, in general, are a necessary part of the CSU system. Student fees are also a necessary part. For the 2018-2019 school year, each CSUSB student was charged $86.93 dollars for each quarter that they were enrolled. 19 percent of the student population used Health Center services this year. “Especially with school, sometimes health tends to be the last priority,” Health Educator Melissa Acuna said. “Taking care of your health now and learning the foundations really carries on into adult life.” For all the services that the Health Center does cover, there are some that are missing. If you … END_OF_DOCUMENT_TOKEN_TO_BE_REPLACED

By Manuel Sandoval |Assistant News Editor| CSUSB's online criminal justice graduate program ranked number two in the nation for having the best value. According to Valuecolleges.com, this is the third time this academic year that CSUSB placed on the "Top 50 Best Value Online Graduate Criminal Justice Programs of 2016.” "We have been ranked numerous times. I am pleased and proud of what our criminal justice department does here at CSUSB," said Larry K. Gaines, criminal justice department chair. This past August the criminal justice online master of arts degree was listed at No. 17 in SuperScholar’s “50 Best Online Criminal Justice Programs 2015,” and No. 20 by U.S. News & … END_OF_DOCUMENT_TOKEN_TO_BE_REPLACED

By Taniya Harwell |Staff Writer| The California Faculty Association (CFA) has released the first document in their “Race to the Bottom” series, exposing how the Cal State University (CSU) system has failed to support its instructors. The “Race to the Bottom” series is a compilation of evidence by the CFA documenting the lack of wage increases for CSU instructors in the last 10 years. “It’s time at long last for the university to fix 10 years of problems,” said Lillian Taiz, a CSULA history professor. The expose shows how, in comparison to other higher education systems, CSU management has failed to invest in their faculty. For example, over the last 10 years, the average … END_OF_DOCUMENT_TOKEN_TO_BE_REPLACED

By Anthony Silva |Staff Writer| While CSUSB student debt ranks among the highest in the state, California’s college students will reportedly graduate with some of the lowest debt levels. The Institute for College Access and Success released its 2013 report on student debt and California ranked as the state with the second lowest average debt. Overall, the average college graduate borrowed $28,400. This was a two percent increase from the $27,850 average reported in 2012, according to the Institute’s report. Some states, including New Hampshire and Delaware, reported debt increases of up to 10 percent. In California, the average debt for a college graduate was $18,656 and … END_OF_DOCUMENT_TOKEN_TO_BE_REPLACED

By Chelsea Galvez |Staff Writer| California community colleges will begin offering bachelor’s degrees in health, science, and technology fields for $10 thousand in a new pilot program beginning in 2017. This price is in comparison to an average tuition cost of $20 thousand for a bachelor’s degree at CSUSB. According to SFGate.com, up to 15 community colleges will be granted eligibility to offer students bachelor’s degrees after meeting requirements from the state of California. This new program hopes to benefit California’s working class, as more of the population will be able to occupy several positions that often require a degree, according to SFGate.com. “Employers in California … END_OF_DOCUMENT_TOKEN_TO_BE_REPLACED

By Angela Rodriguez |Staff Writer| CSUSB celebrated College Awareness Month Saturday, Feb. 9, presenting an informational “College: Making it Happen” event for young students interested in going to college. The informational was held in the College of Education building room 105 for students in grades 6-8 and parents interested in learning about how to prepare for future educational opportunities. The informational intended to encourage students from middle school to high school that college can be affordable. The event was free and open to the public along with complimentary parking. Supporting College Awareness month in Feb. is structured to help our community become … END_OF_DOCUMENT_TOKEN_TO_BE_REPLACED

By Anthony Morales | Staff Writer| This past Wednesday the Coyote softball team lost both of their games against the second ranked team in the nation, UC San Diego Tritons with a disappointing loss of 8-0 in the opener and 8-2 in the second game. During the first game senior infielders Alyssa Flores and Monica Ferguson and sophomore outfielder Victoria Lievanos were the only players to have base hits in the opener. Unfortunately their efforts weren’t enough to put the Coyotes on the scoreboard and they were left scoreless at the end of the fifth inning when the game was called to an end. The Tritons, on the other hand, came in strong since the start and scored four of their eight … END_OF_DOCUMENT_TOKEN_TO_BE_REPLACED

By Courtney Sims |Staff Writer| A new ballot initiative hopes to make California State Universities tuition-free, leaving Californians to pick up the check. The state has come a long way from its original plan, which was founded in 1960, that promised a free education for all residents. Since then California has faced a tough financial crisis and  because of that  the state has had to make tough decisions. A small group of people, consisting of teachers and students, have just been given the ok from the state legislator to gather signatures for a new proposal. The amending proposal would allow for all CSU’s and UC’s to become tuition- free universities.  If the initiative meets … END_OF_DOCUMENT_TOKEN_TO_BE_REPLACED