Racial representation issues lace the discussions of the spring Associated Students Incorporated (ASI) elections which resulted in Adonis Galarza's election for Presidency. Many of the concerns primarily come from an issue of underrepresentation of the Black students. Although CSUSB is a diverse campus, the majority, 63% of the student population, is Hispanic which designates it as a Hispanic-serving institution. Princess Jackson, the President of the Black Student Union (BSU), feels that, even with Adonis Galarza as ASI's President, some of the needs of the black community may still be neglected. “I felt like the ASI elections were not pleasing, and don’t get me wrong, our new … END_OF_DOCUMENT_TOKEN_TO_BE_REPLACED 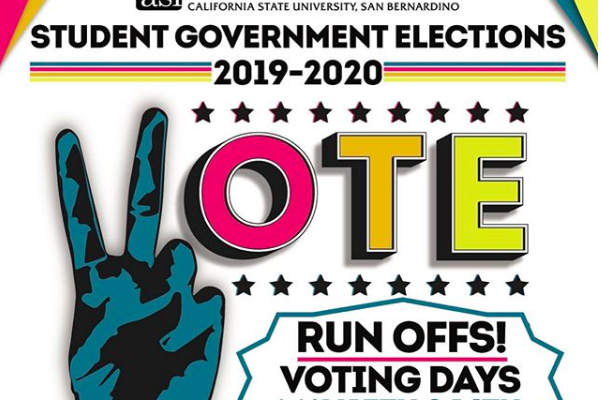 Runoff ASI presidential elections between Yera Nanan and Adonis Galarza Toledo are scheduled for Wednesday, May 15 and Thursday, May 16 online through students' Coyote email. 🚨PRESIDENTIAL RUN OFFS🚨 Don’t think we forgot about you🤤! Come out and visit ASI as we celebrate🗣 RUN OFFS 🗣VOTING DAYS May 15th & 16th. Check MyCoyote email 📧for official ballot. pic.twitter.com/g9izZ0obCv — CSUSB ASI (@ASI_CSUSB) May 15, 2019 In April, ASI had five official candidates listed on their websites. Four were on the ballot, one was a write-in. The candidates' names are as follows: Yera Nanan, Adonis Galarza Toledo, Hector Cordero, Yusra … END_OF_DOCUMENT_TOKEN_TO_BE_REPLACED

By Erica Wong |Staff Writer| Newly elected Associated Students Incorporated (ASI) president Alfredo Barcenas promotes positive change amongst the student body. As a third year political science major, Barcenas has been involved in ASI for as long as he’s been on campus. ASI is a nonprofit student organization with the motto “for the students, by the students.” It’s “student government and student representation at its finest,” said Barcenas. “But it’s also much more than that.” ASI makes sures that the student voice is heard when dealing with educational issues. Students are appointed to various committees with administrators and the president of the university to make sure their … END_OF_DOCUMENT_TOKEN_TO_BE_REPLACED

By Yara Del Rio-Dominguez |Staff Writer| CSUSB’s Correctional Education department has been awarded a grant and has currently received $5.8 million in aid for the planning and implementation of a re-entry program. The program helps promote the safe and successful reintegration of recently incarcerated or detained individuals into the community through using evidence based practices designed to help reduce the risk of re-offending. Participants then must enroll in their court-mandated courses such as anger management and substance abuse. Parolees are addressed as “students” in the program and are also encouraged to sign up for mandated courses, many of whom enroll in G.E.D. … END_OF_DOCUMENT_TOKEN_TO_BE_REPLACED