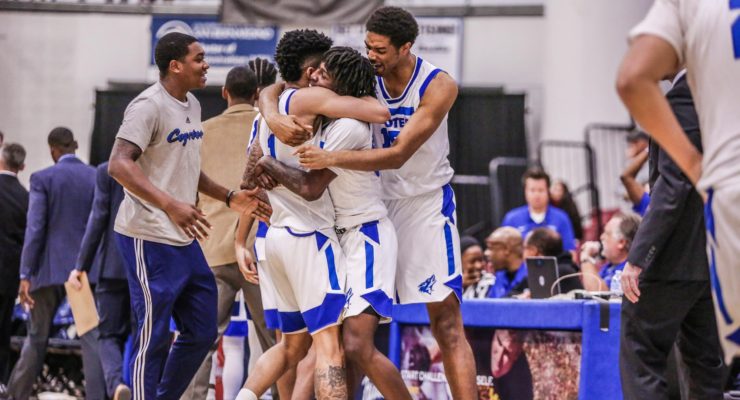 CSUSB basketball team went 2-0 over the weekend, with the second win coming against #16 the University of San Diego with a last-second game winner by Andres Villa. The first win of the weekend came against San Marcos. The Coyotes never trailed in the game and won a defensive battle 68-58. The Coyotes slowed the pace in the second half and controlled the boards 32-28. The team was led by Dante Williams and Villa with 20 and 17 points respectively. "I really like how Andres (Villa) plays," said Williams.  "He is a really crafty post and I try to take advantage of the opportunity when I am on the floor with … END_OF_DOCUMENT_TOKEN_TO_BE_REPLACED

By Jacques Lee |Staff Writer| Coyote men's basketball team fought long and hard to get a solid win in Thursday night's game against Cal State Monterey Bay. The game had a slow start but the Coyotes were able to keep the intensity up.They went into the second half looking for victory. The Coyotes shot at 36 percent from the field during the first half but that percentage increased to 43 percent in the second half. This ledt to 40 percent shooting average. The Coyotes had a close win with a score of 69-66. The Coyotes were led by junior Guard Jacob Thomas. Thomas led the team by scoring 19 points, three steals and one assist. "I know I played a big role in us winning and if … END_OF_DOCUMENT_TOKEN_TO_BE_REPLACED