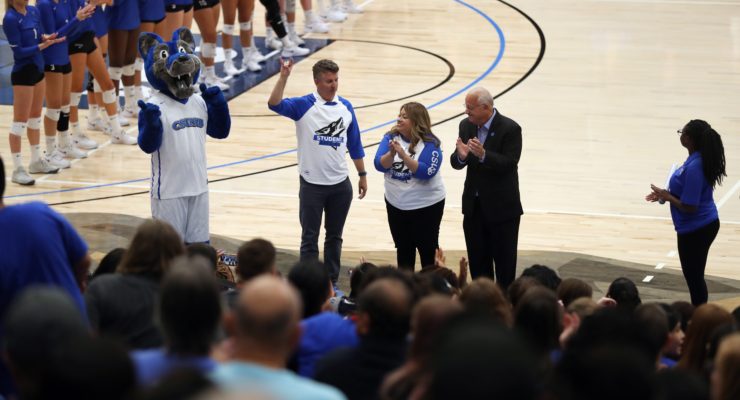 The CSU system has begun the 2020-2021 fiscal year virtually. With many challenges come many changes, one of which being the athletics program. Athletes are not required to return to campus, thus making the department operate differently than usual. When asked about this transition, Athletic Director Shawn Farrell says, “It is times like these that our support is stronger than ever.”  Pat Walsh, Head Athletic Trainer, says, “We were looking forward to getting athletes back in the training room to maintain the general health of our students. Little did we know that we were not going to be able to work with them at all.” Walsh takes the lead on physical therapy with student athletes and … END_OF_DOCUMENT_TOKEN_TO_BE_REPLACED 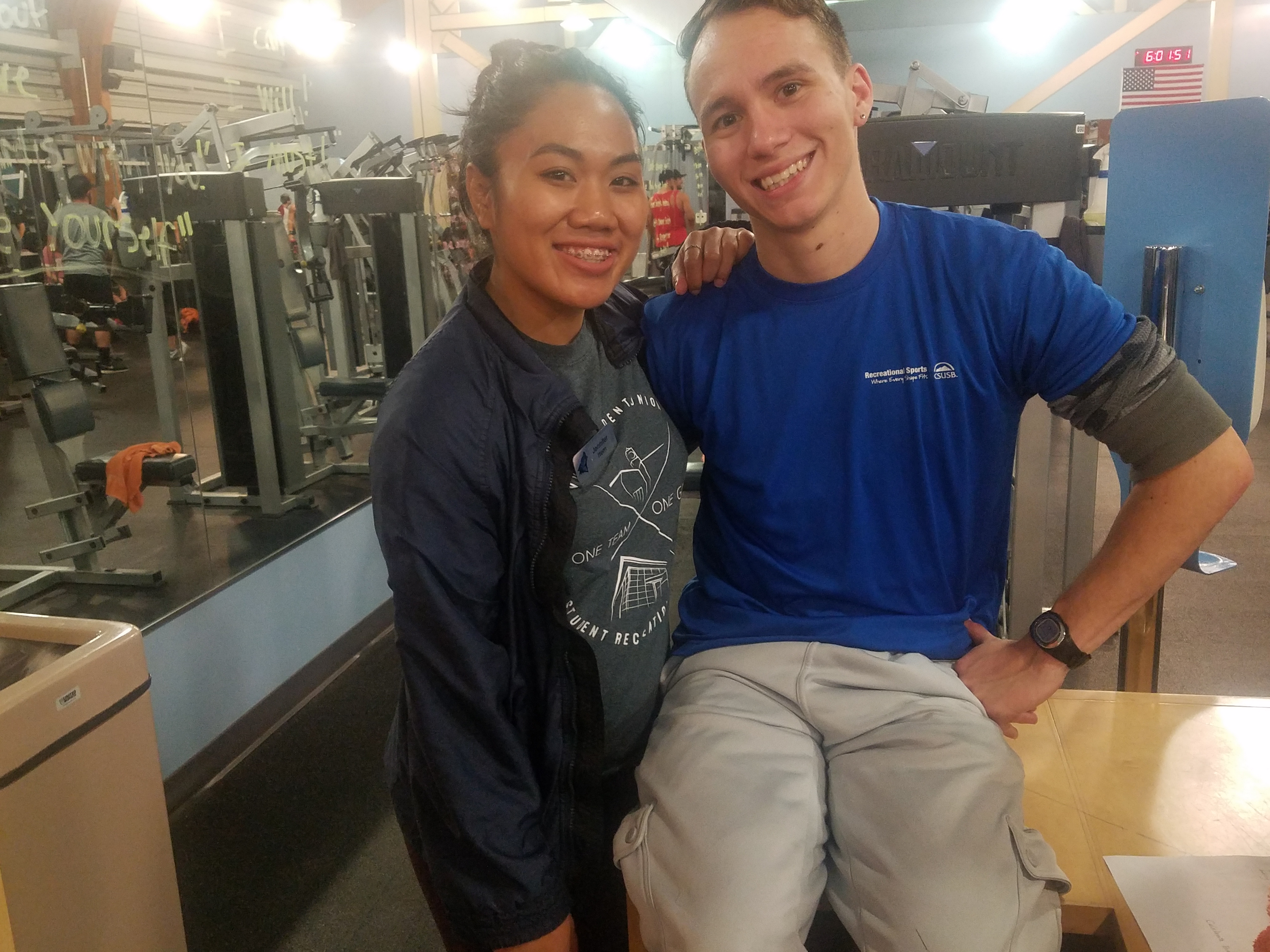 By Sierra Marrero |Assistant Community Editor| The CSUSB Recreation & Wellness Center (Rec Center) hosted its annual Celebrate EveryBody Week starting on Feb. 27 and ending on March 2. The event has been held every year since 2010 to promote positive self image. The Personal Training staff explained that the purpose of the event is to remind people that we come in all shapes and sizes, and to encourage body appreciation. "We all come into the gym for different reasons, whether it is to lose weight, gain muscle, or relieve stress," said personal trainer, Jennifer Item. "The event is to serve as a reminder to appreciate your body in whatever stage it is [...] and for students … END_OF_DOCUMENT_TOKEN_TO_BE_REPLACED

By Gregory Gammill |Staff Writer| CSUSB has had a history with former and current players going above and beyond what is asked of them on and off the playing field. This week’s focus is on Coyote baseball player Grant Buchanan. Buchanan spent the first two years at Colby Community College (CCC), located in Kansas, where he would sharpen his skills for his next baseball career jump. Buchanan decided to come to CSUSB where he has been able to demonstrate his impeccable skills for our baseball team since the 2015 season as an infielder and outfielder. Buchanan has been playing really well and has been performing up to the standards that coaches sought after the past two seasons … END_OF_DOCUMENT_TOKEN_TO_BE_REPLACED

By Jackie Monarrez | Staff Writer | Two points really made a difference for the Coyote women's basketball team as they took to the road this past weekend. The Coyotes made their way to Northern California beginning their weekend against the Cal State Monterey Bay Otters on Friday, Jan. 15, and then against the Cal State East Bay Pioneers Saturday, Jan. 16. They put up a good fight against the Otters but took a 61-60 loss in the end. The loss to the Otters broke the Coyotes four game winning streak. After the first half of the Otters game, the Coyotes were behind 26-29. At the end of the third quarter the Coyotes had tied up the game 44-44. The game was tied until the … END_OF_DOCUMENT_TOKEN_TO_BE_REPLACED

By Sierra Marrero |Staff Writer| After a hard fought battle on the field, Coyote's women soccer lost against Stanislaus State Warriors with a score of 2-1. On Friday Oct. 9, at the Warriors Stadium, the Coyotes began the game with hard offensive pressures from the Warriors. At 23 seconds into the game a quick shot was attempted by Warriors midfielder Gabby Squarcia, but was blocked by Coyote goal keeper Emily Whyte. Briefly within the next minute, a foul was called on the Warriors. Continuing on the battle, the Coyotes were insistent on keeping their defense strong, blocking two corner kicks and one shot on goal. While the pressure continued, the game intensified as the … END_OF_DOCUMENT_TOKEN_TO_BE_REPLACED

By Shelby Hancock |Staff Writer| The Climbing Wall Campout, originally scheduled for Friday, Feb. 6 was cancelled due to lack of sign ups, officials said. This event was set to take place on the rockwall located inside the Student Recreation and Fitness Center, referred to by students as “the Rec Center.” Some students felt that the event was not adequately promoted, and said the lack of publicity may have been a cause of the cancellation. “I went to sign up on Thursday after my friend had told me about it but was turned away and told I missed the deadline,” said Rebecca Frey. LaterThursday night, students who signed up received an email stating, “I regret to inform you that … END_OF_DOCUMENT_TOKEN_TO_BE_REPLACED

By Nathaniel Lastrapes |Staff Writer| Indianapolis Colts backup linebacker Josh McNary was arrested Wednesday, Jan. 14 for rape, criminal confinement, and battery resulting in bodily injury to a 29-year-old woman according to the Indianapolis Police Department. McNary, 26, took the woman back to his apartment after her shift at a local bar at approximately 11:30 p.m. on Nov. 30. The woman was, allegedly, physically assaulted and raped before she managed to escape the apartment with McNary's cell phone. She was able to identify McNary in a set of photos presented to her, stating McNary "looked familiar," but was not able to positively identify him as her assaulter according to the … END_OF_DOCUMENT_TOKEN_TO_BE_REPLACED

By Shelby Hancock |Staff Writer| The domestic violence charges against U.S National Women's Soccer goalkeeper Hope Solo have been dismissed, according to NBC Sports. During the trials, the Seattle Reign F.C, a soccer club that Solo currently plays for, didn't take any action or release a statement. "The Team will await the legal outcome of the case before making a final judgment", according to the Seattle Times.  The U.S Women's National team, however, did show their support. "Based on that information, U.S. soccer stands by our decision to allow her to participate with the team as the legal process unfolds," said Jim Caple. On June 21, 2014 Solo was arrested for domestic … END_OF_DOCUMENT_TOKEN_TO_BE_REPLACED

By Javier Rodriguez |Staff Writer| Twenty-three-year-old Gilbert Parga, one of CSUSB's two Division I transfers, hails from Pico Rivera, California. He attended Cathedral High School in Downtown Los Angeles and graduated from Citrus College in 2012. At the time, he was one of the top junior college recruits in the state. After transferring to Long Island University of Brooklyn, New York, Parga a shooting guard, suffered multiple injuries and was ruled ineligible for 2012-2013 and was forced to red shirt for the season. He ended the season averaging seven and a half points per game, three rebounds and one assist. Presently, Parga is experiencing many changes in his game and … END_OF_DOCUMENT_TOKEN_TO_BE_REPLACED