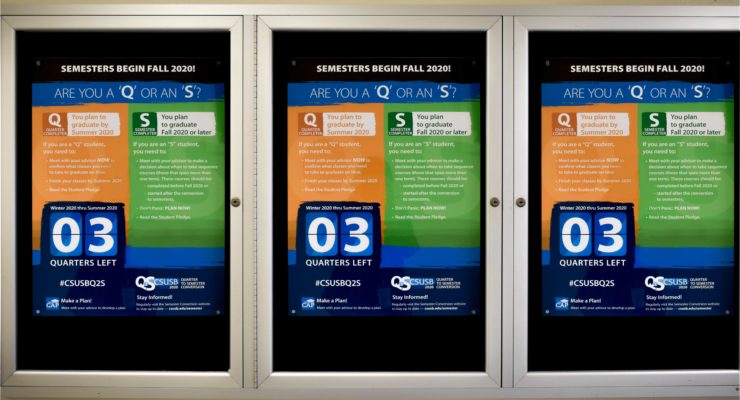 With preparations being made for upcoming transitions from quarter to semester system for both San Bernardino and Palm Desert Campuses, students remain fervent. Many students have been informed about this upcoming transition for a little over two years at both campuses. Some students are excited and thrilled about the fast-approaching transition this fall while others are disappointed about the systems being changed because of added weeks to the semester system. Senior of Communication Studies at the Palm Desert Campus Alex Aparicio, stated, "I'm glad to graduate before the upcoming transition because of originally transferring from College of the Desert and adapting into our current … END_OF_DOCUMENT_TOKEN_TO_BE_REPLACED

By Josh Adamson |Staff Writer| I am celebrating CSUSB's imminent switch over from quarters to semesters.  The change cannot happen soon enough. The quarter system is an archaic, compressive and needlessly dense approach to the organization of higher education. Quarters represent a dying way of scheduling the academic year. Only 14.7 percent of universities use the quarter system, while 71.2 percent use semesters, according to an article by Inside Higher Ed. The same article also notes that the number of colleges that utilize the semester system increased from 62 percent to 70 percent between 1990 and 2001. Such findings are not surprising in light of the benefits of … END_OF_DOCUMENT_TOKEN_TO_BE_REPLACED

By Aimee Villalpando |Staff Writer| The new CSU Chancellor, Timothy P. White, visited CSUSB on May 7 and May 8 and spoke on the current state and future of the CSU system. White met with individual groups and hosted an open forum for students, faculty and staff. White gave a 20-minute speech describing his general focus as new chancellor, which was emphasized in his responses to the Q&A segment that followed. The most popular topic of discussion was the possible transition of CSUSB’s quarter system into a semester system. White claimed that although he previously had advocated for the adoption of semester systems over quarter systems, he had not pushed this … END_OF_DOCUMENT_TOKEN_TO_BE_REPLACED