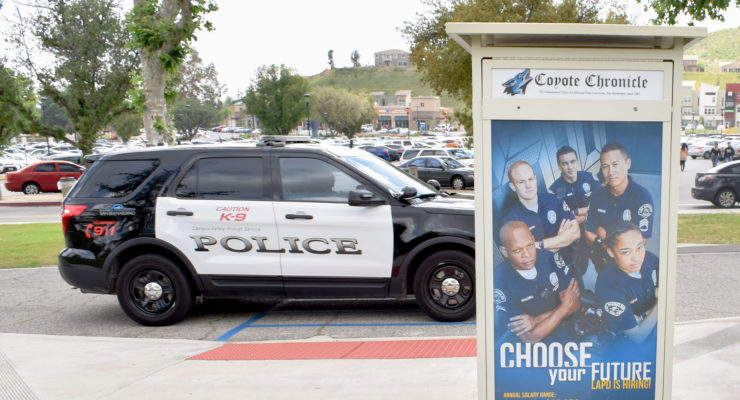 Safety here has become a major talking point at CSUSB, especially after an attempted armed robbery occurred on campus on April 9, in parking lot C. Not only that, but on April 22 a man who was under the influence of a controlled substance was arrested for disrupting a rehearsal in the theater of the Performing Arts building. His bizarre behavior and unusual posturing led witnesses to believe he was possibly armed with a weapon. Nobody was harmed in either situation according to the University Police Department (UPD). However, looking back at these incidents brings up questions: how safe do students feel at CSUSB and what would students like to see improve among … END_OF_DOCUMENT_TOKEN_TO_BE_REPLACED

By Emmanuel Gutierrez |Copy Editor| A CSUSB student was robbed near campus on Jan. 14, according to university police. The incident occurred on the sidewalk of Northpark Boulevard at approximately 9:35 a.m. The suspect, a male black adult between 17-20 years of age, grabbed the student’s backpack and revealed a black handgun, according to CSUSB University Police. “The suspect demanded her property. She gave him her backpack and cellphone,” stated university police in the timely warning notice. The suspect, who wore a gray sweatshirt and a blue bandana over his face, fled to the rear of The Church of Jesus Christ of Latter Day Saints, according to university police. The … END_OF_DOCUMENT_TOKEN_TO_BE_REPLACED

By Jorge Campos |Staff Writer| Woman finds bag of cocaine inside of granola bar. Woman finds bag of cocaine inside granola bar Cynthia Rodriguez reported that a bag of cocaine fell from the wrapper of a Nature Valley granola bar she purchased. Rodriguez stated that she originally thought she won a prize. She called Nature Valley and a company representative told her to report the incident to her local police department, according to WBIR.com.       Police officer sues Starbucks after his free coffee spilled on him Matthew Kohr, a North Carolina police officer who received a free cup of coffee while in uniform, is now suing Starbucks, claiming … END_OF_DOCUMENT_TOKEN_TO_BE_REPLACED 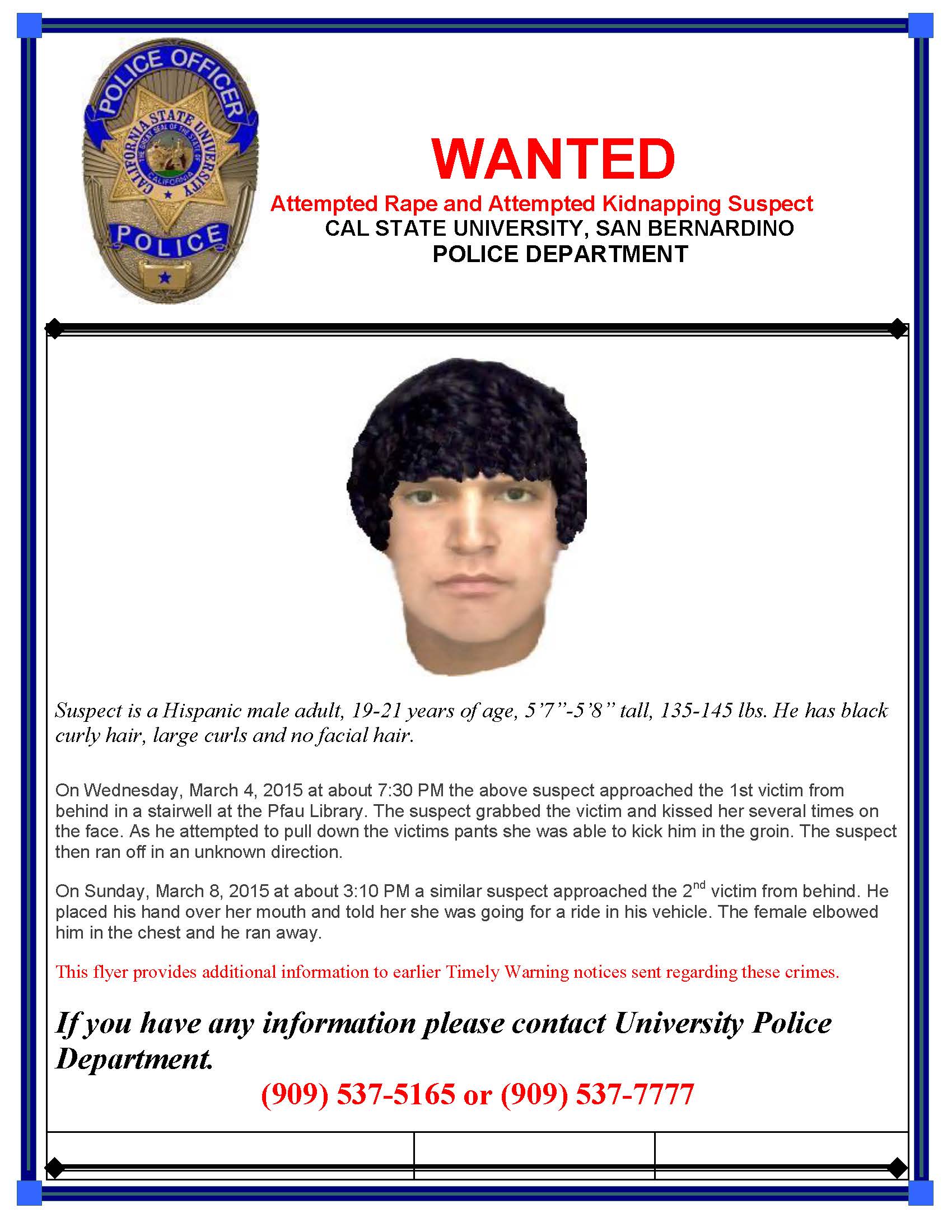 By Marion Gil |News Editor| A wanted poster of a suspect who is allegedly responsible for sexual assault and attempted kidnapping near CSUSB's Pfau Library was e-mailed to students, faculty, and staff on Wednesday, March 11. The sexual assault occurred on Wednesday, March 4 in a stairwell at the Pfau Library. The suspect grabbed the victim and kissed her several times on the face, then the victim kicked the suspect in the groin, causing him to flee, according to University Police. The attempted kidnapping occurred on Sunday, March 8, behind the Pfau Library. The suspect grabbed the victim from behind, placing his hand over her mouth and told her he was taking her to his car … END_OF_DOCUMENT_TOKEN_TO_BE_REPLACED

By Marion Gil |News Editor| In response to the recent rise in crime at CSUSB, President Tomás Morales sent out an e-mail Monday, March 9, detailing how he and the University are dealing with the threat. According to the e-mail, University Police personnel has more than doubled and now patrols 24 hours a day; additional personnel have been brought in from other CSU campuses to supplement our own. Additional police presence has been requested for the neighborhoods surrounding the CSUSB campus. Morales suggested that students put away their phones, headphones, and other distracting objects while walking. Morales also suggested that students do not walk alone and instead try to … END_OF_DOCUMENT_TOKEN_TO_BE_REPLACED

By Jacob Collins |Asst. Online Editor| A student was robbed in CSUSB's parking Lot H on Thursday, March 5, at approximately 2:48 p.m., according to an e-mail alert sent campus wide by Vice President for Administration and Finance, Douglas R. Freer. "The suspect has not been identified and it is not known if he is a member of the campus community. The suspect is described as a Black male adult, unknown age, approximately 6-foot-3-inches and 300 pounds. He was wearing a black shirt and jeans. He fled the scene in a grey, older model Toyota Camry or Honda Accord, which was driven by a Black female adult, wearing glasses," according to Freer's email alert. There is no reason to suggest … END_OF_DOCUMENT_TOKEN_TO_BE_REPLACED