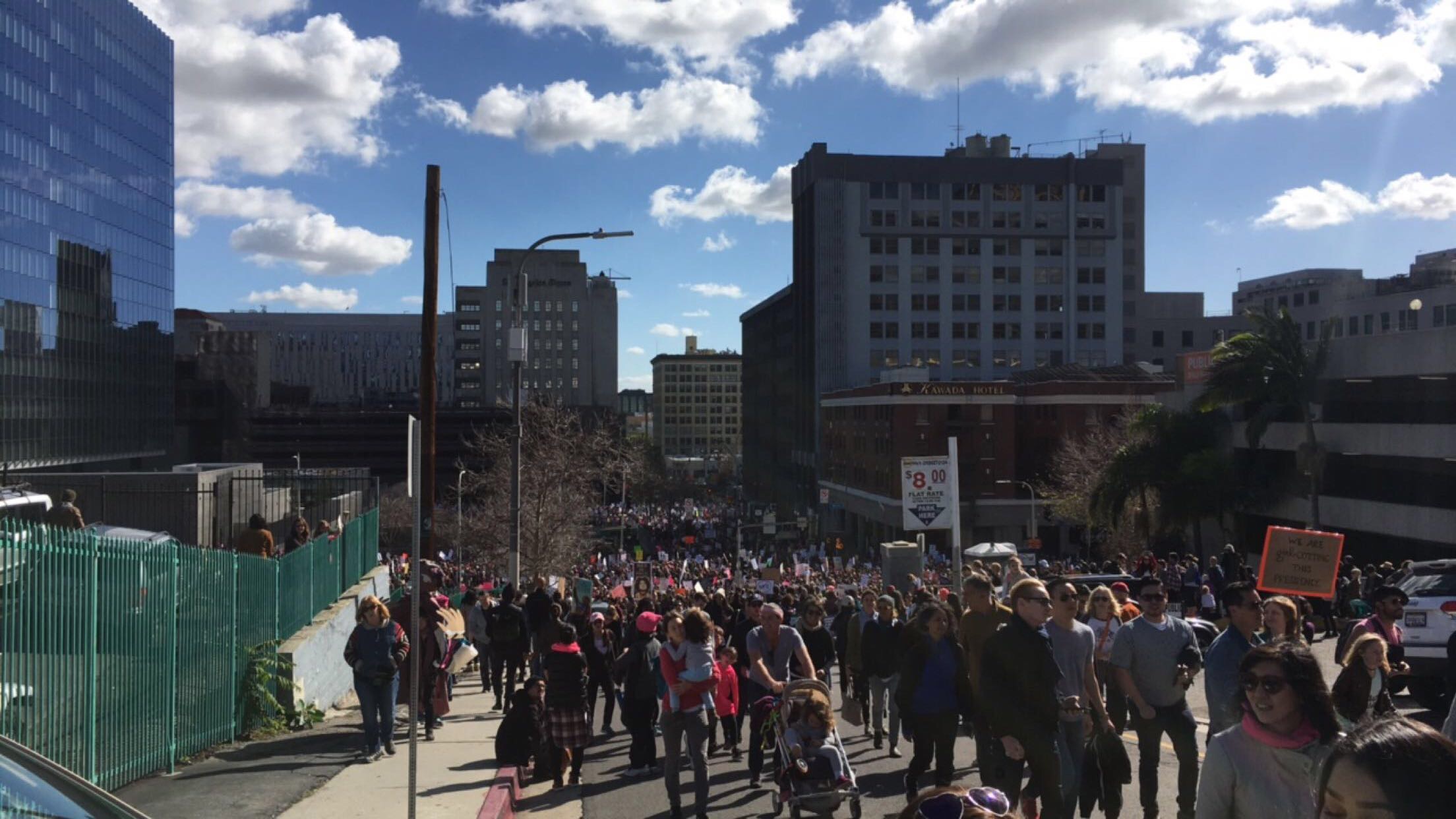 By Brittanie Gutierrez |Staff Writer| Activists and protesters gathered in the streets of Downtown Los Angeles to take part in the historic Women's March on Jan. 21. Los Angeles was just one of many cities that held the march, which originated in Washington D.C. The march started from Pershing Square and would have lead up to City Hall but due to the amount of protesters, the march split up and took over many blocks in the City of Angels. According to the Women's March LA Twitter page, an estimated 750,000 people attended. Women's reproductive rights, immigration, LGBTQ support and human rights were some of the motives behind thousands of people walking. "I've always been … END_OF_DOCUMENT_TOKEN_TO_BE_REPLACED 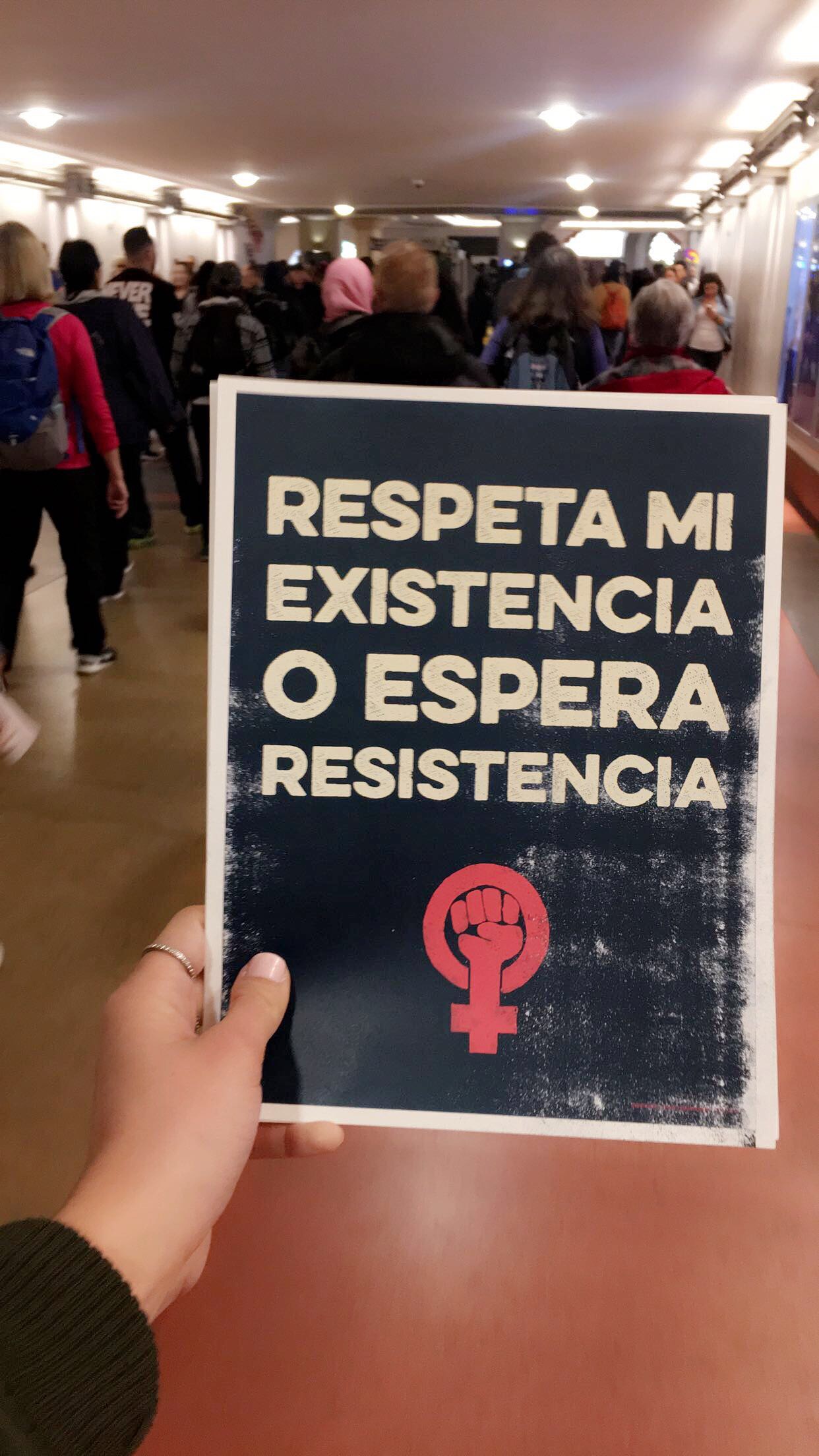 By Brittanie Gutierrez |Staff Writer| I have always been passionate about women's rights; I've always wanted to let people know that my rights were not for negotiation. I never imagined marching next to others with the same emotions, fears and hopes. So when Women's March Los Angeles was formulating, I knew I wanted to take part of it. Being a woman devastated and afraid of the future of my rights, I deemed it vital that I went to this march; it was not an option—I had to go. The morning of the march, I knew nothing but good things were going to happen. After the first stop on the Metrolink, I knew this movement was going to be big; the train had reached maximum capacity … END_OF_DOCUMENT_TOKEN_TO_BE_REPLACED

By Cherae Hunt | Asst. News Editor | I think that activism and protesting does cause social change as long as the cause is absent of violence. As of June 26, The LGBT community has the right to be married legally in the United States. There have been protests for gay rights since 1924 with “the earliest gay rights organization The Society of Human rights in Chicago,” according to infoplease.com For 89 years the LGBT community has been fighting for the same rights as any heterosexual couple. New York City’s Stonewall Inn police raid in 1969 was probably one of the most influential gay rights protests in history. When the mafia-owned bar that offered a safe place for gay men and … END_OF_DOCUMENT_TOKEN_TO_BE_REPLACED

By Cherae Hunt |Staff Writer| California grade school children must now be vaccinated to attend class as a result of an amended bill. “Since 2000, 142 Californians have suffered severe adverse reactions, resulting in 46 deaths of California citizens. Children under the age of 11 months suffered 52.82 percent of these adverse reactions,” according to sb277.org. The lawmakers passed the Bill on the vaccine SB 277 on April 22, 2015 by a 7-2 vote. “Following a measles outbreak that began in mid-December at Disneyland -- which state public health officials attribute in large part to unvaccinated individuals -- California State Sen. Richard Pan and two other lawmakers introduced SB 277 … END_OF_DOCUMENT_TOKEN_TO_BE_REPLACED

By Daniel DeMarco and Marlyn Rodriguez |Features Editor & Asst. Managing Editor| Faculty began protesting outside the San Manuel Student Union (SMSU) at 12:30 p.m. on Oct. 8, 2014. Their protest concerned faculty wages that they claim have not been raised in eight years. Approximately 30 faculty and staff members stood outside the main entrance of the Student Union holding picket signs and marching for their cause. An abundance of students were watching and supporting the protesting staff. Every faculty member carried a sign, all with different slogans written on them including: “President Morales, restore the morale, support your faculty now!”, “8 years with no pay increases + 8 … END_OF_DOCUMENT_TOKEN_TO_BE_REPLACED

By Alexis Figueroa |News Staff| The California Faculty Association reportedly walked out on negotiations on May 7 without giving a counterproposal, because the California State University’s offer did not meet the CFA’s standards. With the CSU system not meeting the CFA’s demands; they are not backing down. The CFA has been going through negotiations and hope to come to an agreement that guarantees improved treatment by the CSU administration and improved job security. Also included in the CFA’s demands is better quality of education for students and a fair distribution of money received from budget cuts, according to the CFA website. The CSU and the faculty union came to an … END_OF_DOCUMENT_TOKEN_TO_BE_REPLACED

By Courtney Sims |Staff Writer| Twelve Immigrant Youth Coalition (IYC) protestors were arrested on Jan. 24, outside of City Hall in San Bernardino during a sit-in called “Undocumented and Unafraid.” Of the 12 arrested, 10 may face deportation. Protestors sat-in in front of the Department of Homeland Security’s field office and Downtown City Hall to protest the treatment of undocumented residents. “No papers, no fear. Immigrants are marching here,” chanted group members. Other hot button issues included the Secure Communities program, in which the FBI automatically sends fingerprints to Immigration and Customs Enforcement (ICE) to check against its immigration databases to … END_OF_DOCUMENT_TOKEN_TO_BE_REPLACED

By Alejandra Arana |Staff Writer| There needs to be a grace period at the start of each quarter to give students more time to purchase parking permits so they don’t receive harsh fines that could cripple them financially. Parking Services needs to be more accommodating to students who are struggling to get by. Imagine you are a freshman coming onto campus for the first time. You are in a rush to talk to the financial aid office because for some reason all of your classes were dropped and now you have nowhere to show up on Monday morning. You take the first parking spot that is available and get in the long line for financial aid that ends around University Hall. Two hours … END_OF_DOCUMENT_TOKEN_TO_BE_REPLACED 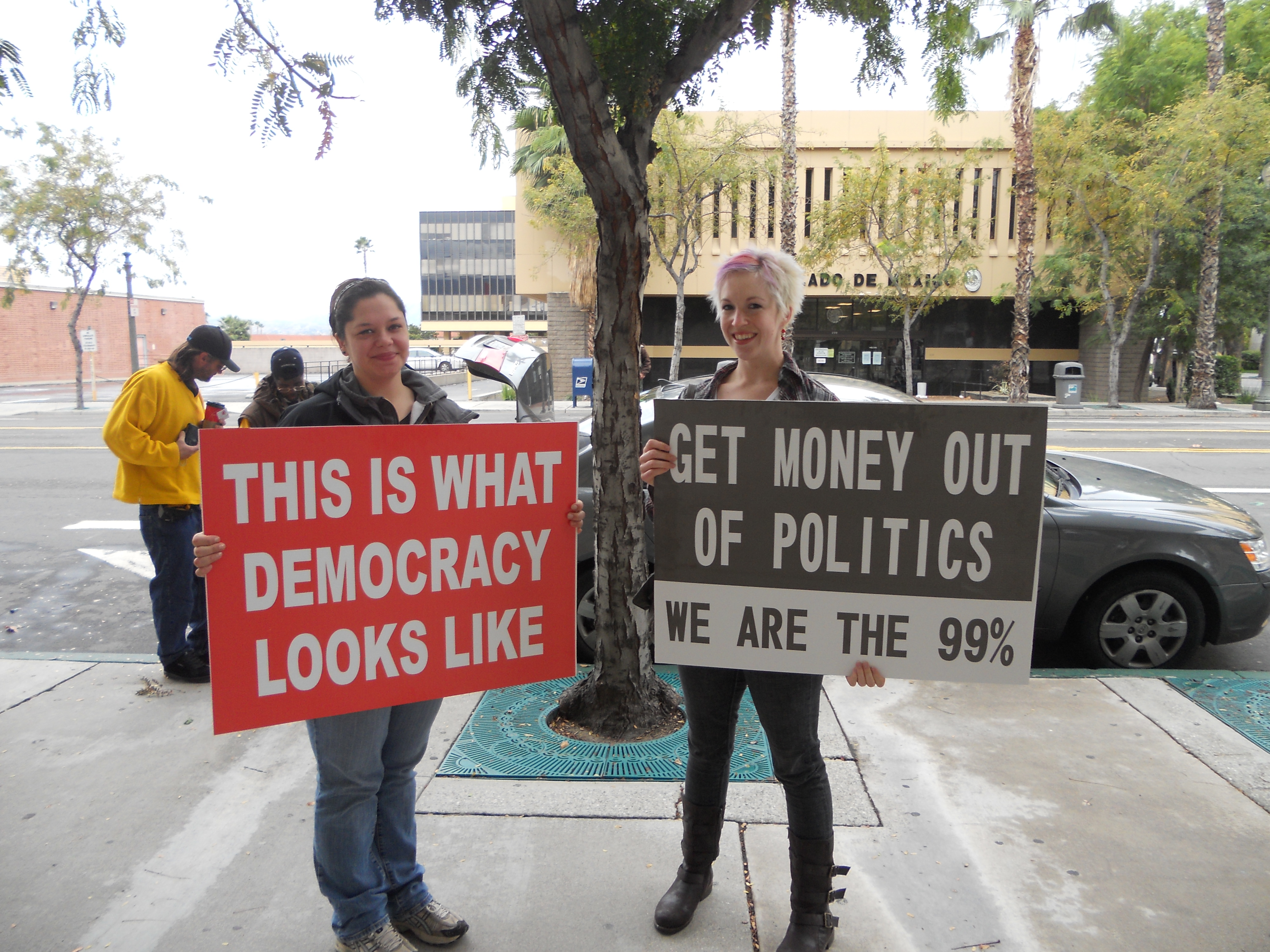 by Monica Gallegos | Staff Writer | Rain and chilly weather didn’t stop the first assembly of Occupy San Bernardino in downtown San Bernardino on Nov. 17. There was an estimated 40 protesters in attendance for the first occupation. The protesters consisted of all ages, including children. They marched around the Bank of America and Wells Fargo on North D Street chanting, “Banks got bail out, we got sold out.” “We are encouraging people to pull out their money from big banks and take their business to smaller and local institutions,” said protester Larry Garcia. “We are protesting big banks and the irresponsibility of the government,” Garcia added.     According to protesters, … END_OF_DOCUMENT_TOKEN_TO_BE_REPLACED 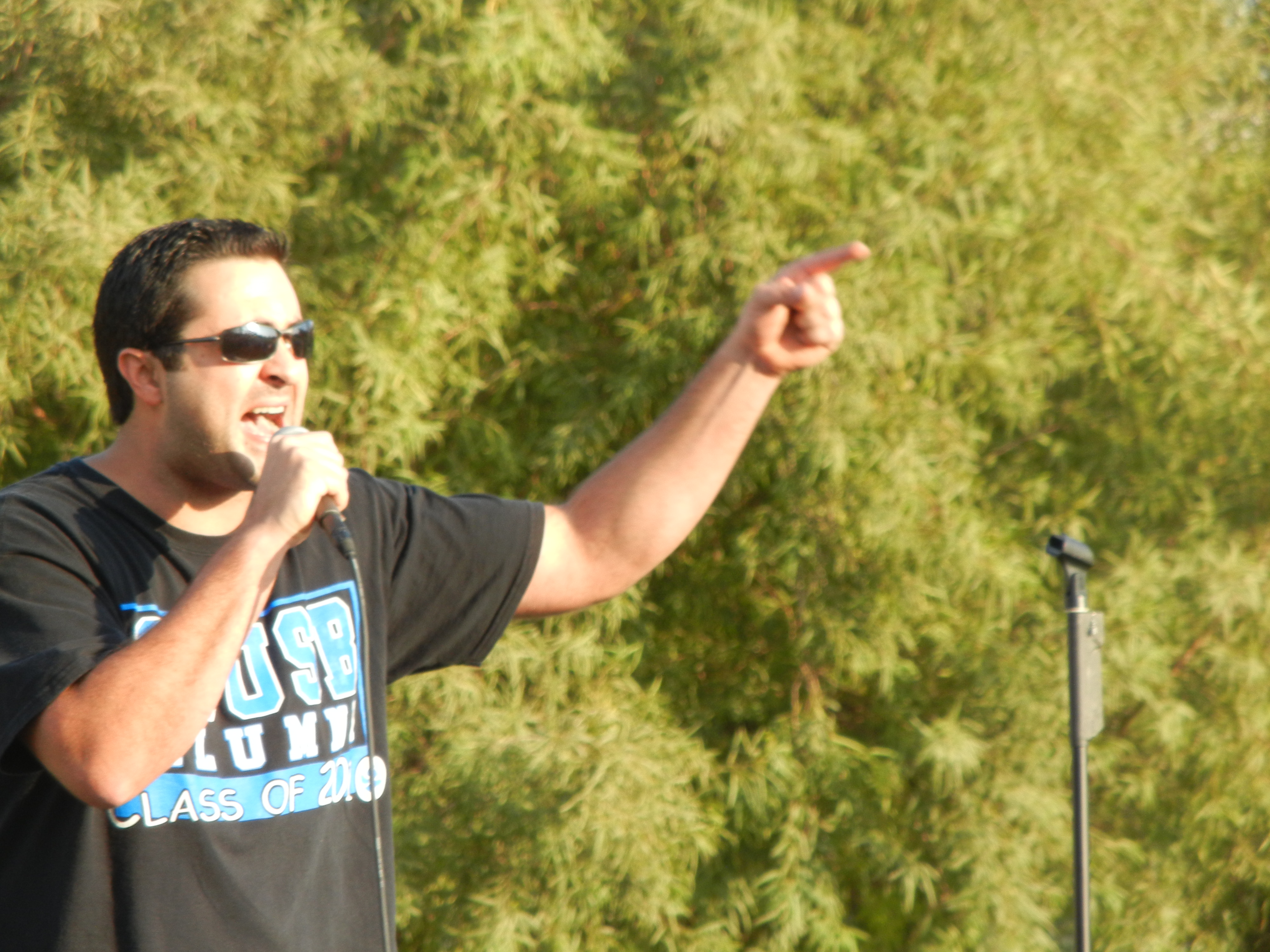 by Eric Sanchez | Asst. News Editor | CSUSB students gathered to protest rising tuition fees and to voice their concerns over the quality of higher education in California on Nov. 16 in front of the Pfau Library. Representatives of Students for Quality Education (SQE) and community activists gave speeches about how they say inequalities between university administration and the students and faculty are making it harder to obtain their college degree. The CSU board of trustees voted to increase tuition system-wide for next year by nine percent earlier that same day, according to the LA Times. Along with the nine percent tuition increase, the board also included a request for … END_OF_DOCUMENT_TOKEN_TO_BE_REPLACED