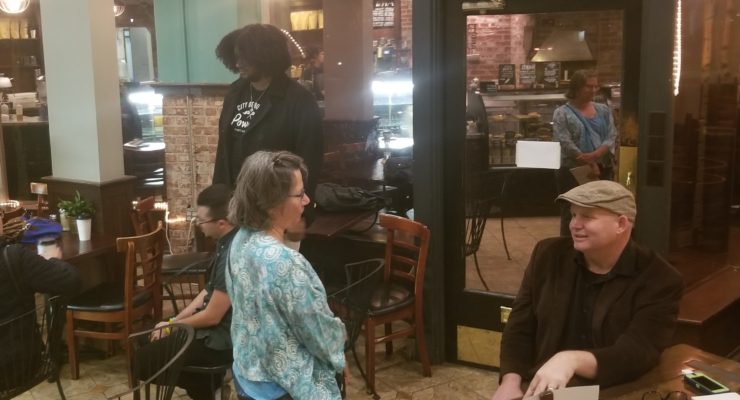 On May 19, at Bricks and Birch, a café in Redlands, Professor Chad Sweeney, an English Professor at CSUSB, gave a reading for his recently published book, Little Million Doors. Several of his current and former students were present to show their support. With graduations approaching, students will soon go out into the world and pursue their careers. For creative writers, readings at café’s and bookstores could soon become a part of their careers. Jolene Redvale is a current student of Professor Sweeney’s. She says that before attending the reading she had no idea what his published work was about. She says the reading was emotional. “I got a little bit wound up because he was … END_OF_DOCUMENT_TOKEN_TO_BE_REPLACED

Coyote Radio en Español is a special program of Coyote Radio, directed by Dr. Gallegos-Ruiz and Lacey Kendall. The program started in 2009 when Lacey Kendall, Director of Coyote Radio, met two students that wanted to start a show in Spanish. Student volunteers directed the show for a few years until they graduated.Later, Dr. Gallegos, a professor of Communication, spoke to Kendall and asked if there was a way to involve her students in a journalist media broadcast experience. “She was the one who brought it back to life and told me, how about instead of sending you two students, I’ll put the whole class on task,” said Kendall. Soon Kendall and Gallegos started collaborating together on … END_OF_DOCUMENT_TOKEN_TO_BE_REPLACED

By Tommy McCardle |Staff Writer| When Sid Robinson isn’t enjoying a round of fantasy football or at a Dodgers game, he is teaching at CSUSB. Robinson is also busy on the campaign trail running for City Council in the city of Upland, California. Robinson is a new professor on campus this fall quarter, however he isn't a new face to the educational institution.  He was the associated vice president of Public Affairs for the school from 2002-2014. "My pledge is to bring an open-minded, rational and collegiate approach to our City Council for the overall good of Upland," according to Robinson's campaign website, Sid4Upland.com. Some of Robinson’s proudest memories with CSUSB have … END_OF_DOCUMENT_TOKEN_TO_BE_REPLACED

By Elina Urrutia |Staff Writer| Ana Maria Maldonado has been a passionate part-time lecturer here at CSUSB since 2000. “I knew I always wanted to be a professor and wanted to teach at the college level,” said Maldonado. “I find that the students here, especially upper level, are very interested in the subject, and I love that because it makes me want to teach better,” added Maldonado. Maldonado is from El Paso, Texas. She is fluent in English and Spanish due to her Mexican-American upbringing. Her grandparents who are from Mexico, came here during the revolution in the 19th century. Maldonado has done many unique things throughout her life. For instance, she was … END_OF_DOCUMENT_TOKEN_TO_BE_REPLACED

By Rona Ortiz |Staff Writer| The ideal amount of students is a matter of preference. A students poll regarding the impact of class sizes on the quality of learning experience concluded that one size doesn’t fit all. In 2013, 18,398 students were enrolled at CSUSB, according to the Office of Institutional Research. Average class sizes on our campus are 36.8 students for lower division classes and 28.1 for upper division classes. “The main benefit of a large class is that more students can enroll,” said student Vanessa Real. The largest classes can enroll up to 260 students. Several students agreed that when it came to general education courses, class size was less of an … END_OF_DOCUMENT_TOKEN_TO_BE_REPLACED 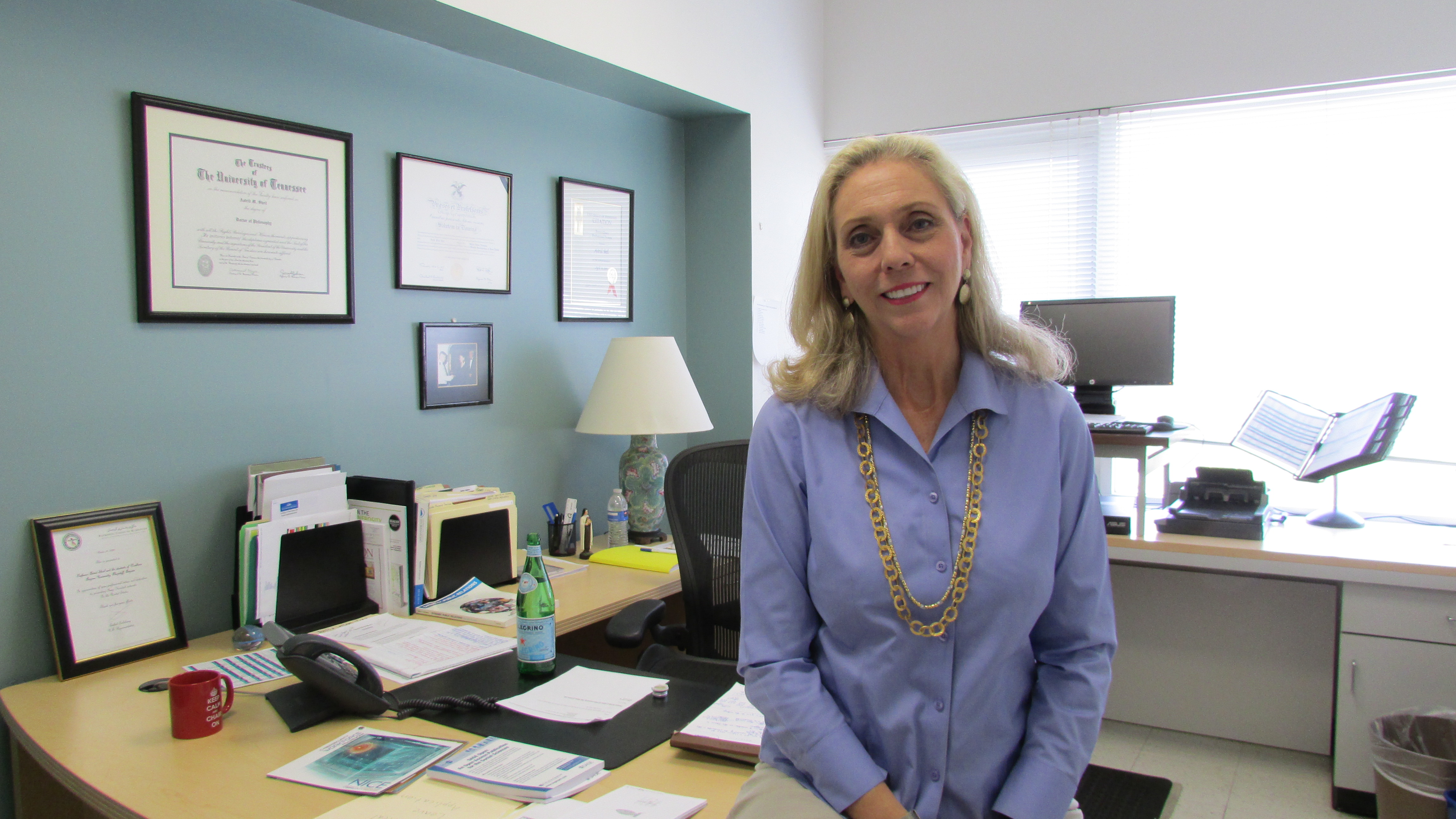 By Erin Campbell | Staff Writer | Funny and inspiring, Dr. Astrid Sheil has taken on her newest task as the official Interim Chair for accounting and finance. A typical day in the life of Dr. Sheil begins with a 5:30 a.m. workout session, whether it's Zumba class, lifting weights or walking her dogs. After her workout, she heads straight to work. Her days are mostly filled with meetings with students, advising them on how to make their college experience as smooth and stress free as possible. In addition to student meetings, there are leadership meetings that focus on the direction of the College of Business and Public Administration. Prior to her current position, … END_OF_DOCUMENT_TOKEN_TO_BE_REPLACED

By Marion Gil |Staff Writer| CSU professors receive tenure for reasons that may not be apparent to students despite their role in the process. Tenure is essentially a permanent contract for teachers and professors, and while it does not include a pay raise it ensures that an educator’s position can not be terminated without “just cause,” which usually means severe misconduct. The popular myth is that educators simply need to work for a certain amount of time to receive tenure, which is not true. “Pretty much the myth of tenure is that you do a good job,” said CSUSB professor Terri Nelso, "and then you have a job for life. Well, no." Professors eligible for tenure are those who have … END_OF_DOCUMENT_TOKEN_TO_BE_REPLACED

By Caleb Gasteiger |Staff Writer| Many if not all students have filled out a professor evaluation form at least once without any knowledge of where their suggestions, criticisms and compliments end up. CSUSB student Kathryn Wall doesn’t understand who gets evaluated and why. “I had [to do] 3 [evaluations] on Tuesday and I was wondering why my fourth teacher didn’t get evaluated. I’ve also had teachers that I didn’t like... and I never got the chance to evaluate them,” said Wall. Jessica Villanueva, a senior in psychology, said, “I know it affects their job, but after that, I don’t know.” The consensus of students interviewed agreed that they have given some bad reviews as well … END_OF_DOCUMENT_TOKEN_TO_BE_REPLACED

By Marc Olivier Drouin |Staff Writer| The Outstanding Professor Selection Committee invites CSUSB students to nominate the professor they think deserve the Outstanding Professor Award (OPA). The OPA rewards a professor that is recognized for their excellence in teaching. This award is basically one of the biggest distinctions a professor can have in their career – this is like the Grammy Lifetime Achievement Award of education! Besides being considered a prominent professor, the selected faculty member also receives prizes; such as a $1,000 check and a $3,000 Faculty Professional Development grant for purposes of research and professional activities. Moreover, the OPA winner will … END_OF_DOCUMENT_TOKEN_TO_BE_REPLACED