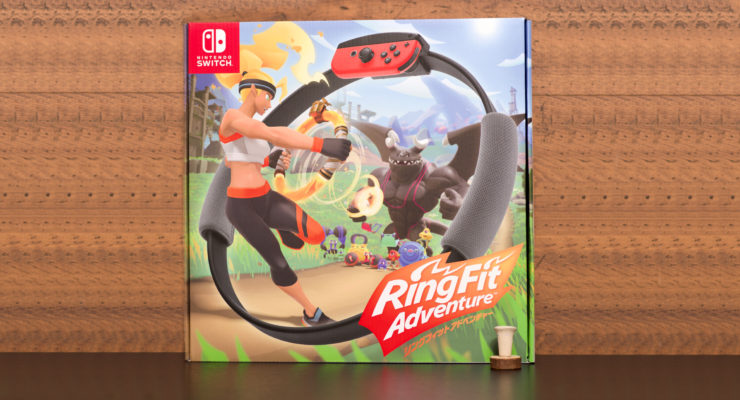 With a lot of gyms and outdoor activities being postponed intermittently, lots of people have been staying indoors and, for some, their exercise routine has come to a halt. Fortunately, exercise can still be done indoors and safely from home. Video games and fitness have always had a history together throughout the times, such as the fan-favorite and popular game, Wii Fitness, that was enjoyed by many. Even when people are now mostly indoors, there are a lot of video games that aim to bridge that gap, and Ring Fit Adventures is one of them. Developed by Nintendo for the Nintendo Switch, Ring Fit Adventures makes users traverse and travel through many worlds, all while battling enemies … END_OF_DOCUMENT_TOKEN_TO_BE_REPLACED

This October marks the release of the first traditional 3-D Mario Brothers game since 2010 on Nintendo Switch. Super Mario Odyssey, as it is called, doesn't fail to make the wait worth the while. That is not to say that Super Mario 3D World, released in 2013, was a bad game, but many Nintendo fans, myself included, have been eagerly awaiting a new 3-D Mario that uses the style of gameplay created in Super Mario 64.  The game has had a strong release, selling two million copies in only three days, according to Nintendo’s own financial reports. This is equally impressive when one considers that there are only seven million Switch consoles sold so far. Odyssey is also averaging an … END_OF_DOCUMENT_TOKEN_TO_BE_REPLACED

By Nylles Vernon |Staff Writer| Nintendo released a three minute introductory teaser trailer for The Nintendo Switch, the company's newest console system aimed entirely at an older generation of gamers. The console has been shrouded in mystery for a few years now, but it has finally been revealed as a home and handheld device that can also be turned portable. The trailer currently has 18 million plays on YouTube and 95 percent of the people who have seen it have given it positive reviews. In the trailer, users are shown playing their favorite games at home and are seen converting the console to a handheld device to take with them on the go. The console is just as big as a … END_OF_DOCUMENT_TOKEN_TO_BE_REPLACED

By Arthur Medrano |Staff Writer| Video games are the quintessential way for students and friends to have a good time without having to get physically hurt, unless you button smash, which brings hours of soreness and ice packs to the party. We all know games like Mario and Call of Duty, but this week’s scoop is on the new and upcoming games that 2016 has in store for us. First off, we have “Street Fight V” the fifth entry in the legendary fighting series. Making its ways to stores on Feb. 16, a select feature for this game will be the PS4 and PC Cross-Platform Play. This means it will be the first time in the online versus world that everyone will be in a single-player pool, … END_OF_DOCUMENT_TOKEN_TO_BE_REPLACED

By Nicholas Whitt |Staff Writer| Gender equality is a necessity in today's society, and all forms of entertainment should follow this—especially video games. Recently, video game companies joined the movement for fair gender representation, but have they truly? Female lead characters in video games have become a trend lately with the release of "Assassin's Creed Syndicate," the sequel "Rise of the Tomb Raider," and now the introduction to Linkle — Link's (from "The Legend of Zelda franchise) female counterpart. Are video game companies doing this for profit or because they genuinely want a female presence in their product? Wait, sounds like that might be the money train coming … END_OF_DOCUMENT_TOKEN_TO_BE_REPLACED

By Woojung Choi |Staff Writer| This Asian culture fever may be affected by the increase of the Asian population all over America, notably in cities such as Los Angeles, California. “Since 2010, Asian Americans have been the fastest-growing racial/ethnic group in the United States...with the total Asian-American population in the U.S. at 19.4 million,” according to NBC news. The most representative example of Asian culture fever in America is K-Pop, particularly Gangnam style. Korean singer Psy wrote the lyrics to the song which became a huge hit in the U.S., ranking second on the Billboard Hot 100 list in America. “I have heard of Gangnam style when it first became a hit. It … END_OF_DOCUMENT_TOKEN_TO_BE_REPLACED

By Mike Sessions |Staff Writer| After nearly five years of careful development, the time has come for the release of the highly anticipated PlayStation 4 game system. After Sony’s very successful run with the PlayStation 3, which was released back in 2006, the PS4 is slated to be much more advanced in nearly every aspect as far as software compatibility, speed and features. Complete downloadable content is now available, allowing consumers to not only purchase games from retail stores, but download games right onto the hard drive. The download doesn’t even have to be complete before gameplay, as it will continue downloading using PlayStation’s new secondary background … END_OF_DOCUMENT_TOKEN_TO_BE_REPLACED