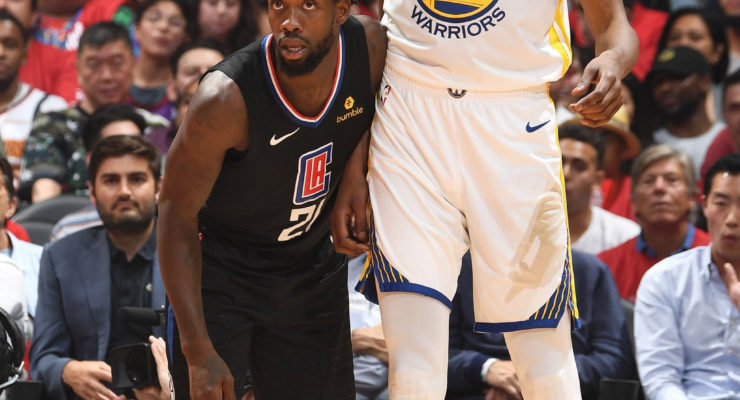 With the NBA season finally ending and heading into playoffs. The ultimate question is: Who will win it all?  Who will take home the Larry O’Brien Championship Trophy? Will it be the Warriors once again? Or will it be a completely new team? This season there are plenty of new teams who have joined the playoffs to see who can beat the Warriors. So who will it be?  During April, the NBA playoffs are always the talk between many individuals, including college students, adults, teenagers, everyone. So I decided to interview many students on and off campus at Cal State San Bernardino and Chaffey Community College, asking them: Who will win the 2019 NBA championship? I knew the answers were … END_OF_DOCUMENT_TOKEN_TO_BE_REPLACED 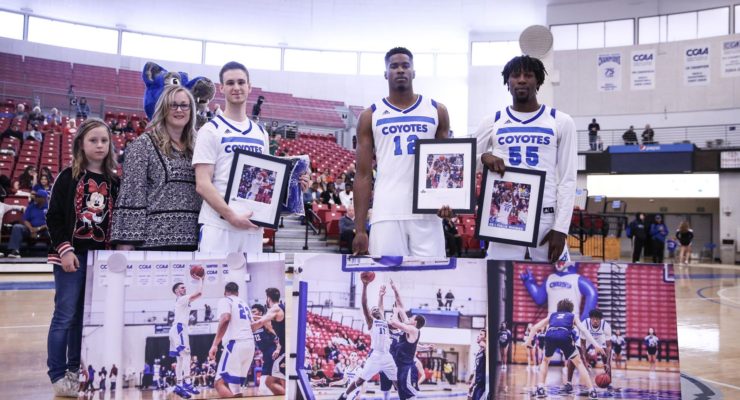 On Saturday, five seniors played their last game in a Coyote uniform. Seniors Jasmine Sauser and Rachel Cain of the women's team, and Garrett Baggett, Justice Green, and Malik Rhodes were the seniors who were honored. The Coyotes, unfortunately, lost both games to Stanislaus State; the women’s team lost 65-52, and the men's team 97-88. Saturday’s games kicked off with the two women seniors being honored before the game. Jasmine Sauser, the teams leading scorer, had an off game with 3 points on 1-11 shooting. “Jasmine has been good for us all year. Her scoring and leadership have been key. Obviously, today was an off game for her but, she has led the team all year,” Said Head Coach … END_OF_DOCUMENT_TOKEN_TO_BE_REPLACED

By Diara Fowler |Staff Writer| As the professional basketball season kicks off, many hopeful fans anxiously await, hoping their team making it to the National Basketball Association (NBA) finals this year. "Even though I grew up in Rancho Cucamonga, I've always been a fan of the Golden State Warriors as I have many family members up towards the Bay Area," said business major Arin Tanji. The Golden State Warriors began their 2016-2017 season with a 4-1 record. Holding hope and courage from their first four wins, they strive to make it back to the championships again this year. The Golden State Warriors finished their season in second place last year, making it to the … END_OF_DOCUMENT_TOKEN_TO_BE_REPLACED

By Nathaniel Lastrapes |Staff Writer| The 2015 NBA trade deadline was the most active it had been in years, drastically changing the state of the league. The most sought-after player on the trading block was point guard Goran Dragic of the Phoenix Suns. Dragic is set to become a free agent after the 2014-15 season, where he will be a hot commodity while seeking a maximum contract from a team. The Slovenian point guard is averaging 16.3 points and 4.1 assists per game and he brings a plethora of intangible assets to his team. The evening prior to the deadline, Dragic made his intentions of leaving the Suns during free agency clear, forcing the organization's hand to trade him … END_OF_DOCUMENT_TOKEN_TO_BE_REPLACED

By Emmanuel Valadez  |Staff Writer| The 2015 NBA All Star Weekend and it was one to remember for many years. NBA All Star Weekend is a weekend-long festival that occurs once a year, and it gives all of the players and coaching staff of the NBA an opportunity to rest during the grueling season.  The festival consisted of several events and special performances by famous artists such as Ariana Grande, Christina Aguilera, and Nicki Minaj. This year's All Star Weekend took place at Madison Square Garden in New York City. The Three-Point and Slam Dunk contests were two very popular events this year. The Three-Point contest had some of the best shooters in years, such as … END_OF_DOCUMENT_TOKEN_TO_BE_REPLACED

By Shelby Hancock |Staff Writer| The Los Angeles Laker's shooting guard, Kobe Bryant faces a third consecutive season out of the game. In their game on Wednesday Jan. 21, against the New Orleans Pelicans, Bryant tore his rotator cuff according to ESPN reporter Baxter Holmes. Bryant, 36, was forced to play the game left handed, ending in a 96-80 loss for the Lakers. In his 19 seasons Bryant averaged a 25.4 points per game. This season Bryant averaged 22.3 points per game according to ESPN. This season Bryant played in 35 games and shot 37.5 percent, far below his career mark of 45.4 percent according to the LA Times. Many coaches started to realize Bryant wasn't playing … END_OF_DOCUMENT_TOKEN_TO_BE_REPLACED

By Javier Rodriguez |Staff Writer| After 19 seasons of NBA play, recent Achilles and knee injuries, and considering the fact that he is 36 years old, Kobe Bryant is still defying Father Time and hushing critics. Most recently named the 40th best player currently in the NBA by ESPN, Bryant is proving that low rating wrong by leading in NBA scoring as he reaches 32,001 career points, which makes him about 290 points away from Michael Jordan's career points (32,292). Skeptics are quick to doubt Bryant's ability. However, Bryant lets the negative talk fuel his drive and ambition. Maybe he wasn't at his best during Friday night's game against the San Antonio Spurs when the Lakers lost … END_OF_DOCUMENT_TOKEN_TO_BE_REPLACED

By Donte Medder |Staff Writer| Coming into this years draft with only a 1.7 percent chance of winning the number one pick, the Cleveland Cavaliers did just that, securing the pick for the third time in four years. After suffering through 49 losses in the 2014 season, the Cavaliers were most likely to pick around the ninth spot in this year’s draft. The Milwaukee Bucks, who had the worst record in the NBA this year, have to settle for selecting second. This years amazing depth of talent includes franchise changing talent. Freshmen Phenoms, Jabari Parker, Joel Embiid, and Andrew Wiggins are all but locked in to be the first three off the board. Parker, who spent a year at Duke, is … END_OF_DOCUMENT_TOKEN_TO_BE_REPLACED

By Elizabeth Piraino |Staff Writer| The NBA playoffs are in full swing as teams are finishing up each of their series. The Brooklyn Nets series with the Miami Heat at American Airlines arena came to an end in a losing effort. Unfortunately for the Nets, the Heat came through with less than five minutes to play to end the game and eliminated the Nets. Miami was down by eight points with 4:49 left in the game and came back with 12 unanswered points. The Heat put the game away for good when Ray Allen, the NBA 3-point leader, sank a three-point shot with 32-seconds to play. The Nets came within one point of tying the game when Joe Johnson hit a three-point shot with 11 seconds left to … END_OF_DOCUMENT_TOKEN_TO_BE_REPLACED

By Gina Miranda |Staff Writer| Kevin Durant, Oklahoma City’s shining star was named the NBA’s Most Valuable Player (MVP).  The 25-year-old forward for the Oklahoma City Thunder also won this year’s scoring title for the fourth time in five years. Durant's acceptance speech was heartfelt, humorous, and reminiscent of his humble beginnings as a young basketball player. A tearful and barely audible Durant publicly thanked his mother for being the motivating force behind his success. "We weren't supposed to be here, you made us believe, you kept us off the street, you put clothes on our back, food on the table, and when you didn't eat, you made sure we ate," Durant continued, “You … END_OF_DOCUMENT_TOKEN_TO_BE_REPLACED