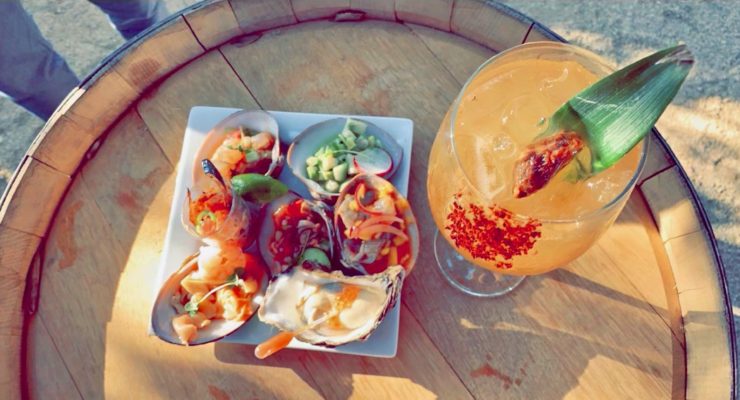 Shrimp are one of the most popular delicacies in seafood to eat. Chilies is a delicious ingredient to have on your main plate. You can add both shrimp and chilies together, and you'll end up with aguachiles - a well know Mexican dish. Aguachiles originated from Sinaloa, a state in Mexico, where they are traditionally made in a molcajete. A molcajete is a stone bowl used for making sauces and grinding many foods. In today's society, most Mexican households have a molcajete because, for them, it’s a common need - just like a pot or pan in a house kitchen. Generally speaking, this dish is one of Mexico's common delicacies enjoyed by many people.  Aguachiles are usually made during the … END_OF_DOCUMENT_TOKEN_TO_BE_REPLACED

By Elina Urrutia |Staff Writer| Come learn and experience Latino culture. Día Latino is a celebration of Latino culture, presented by Acto Latino and Los Amigos Spanish Club. The event will be held on campus, June 2 from 3 p.m. to 6 p.m. on the library lawn. Los Amigos Spanish Club is a student run organization that provides students a common interest in Spanish languages and culture. "Almost everybody has one view of what Hispanics are; that is the typical Mexican with the big sombrero and the big mustache and that's not who we are," said Valerie Salazar, president of Los Amigos. The club tries to educate other people on the culture of Hispanics everywhere. "We have … END_OF_DOCUMENT_TOKEN_TO_BE_REPLACED

Kyle Richardson |Staff Writer|   Georgia Prison Guards arrested after FBI Sting (Feb. 11) After an FBI sting operation of a Georgia prison, 46 current and former correctional officers, as well as two civilians and one inmate, were arrested for drug trafficking. Dozens of guards agreed to drug smuggling operations for a high-level trafficker. Guards believed their position would keep them from getting caught. In exchange for this, they received thousands of dollars in bribes, according to ABC News.   Mexico Prison Riot chaos (Feb. 11) A riot broke out on Feb. 10 at Topo Chico Prison in Monterrey, Mexico, which left 52 dead and 12 others injured. The riots … END_OF_DOCUMENT_TOKEN_TO_BE_REPLACED

By Manuel Sandoval lStaff Writerl More Mexican immigrants, documented and undocumented, are returning to Mexico instead of staying in the United States. An estimated 870,000 Mexicans came to the United States between 2009-2014, but one million returned home. In 2014, there were 11.3 million unauthorized immigrants in the U.S., according to Pew Research.   “The net decline in Mexicans was driven by the great recession in the U.S. that made it harder to find jobs, and the economy is improving in Mexico,” said Mark Lopez, director of Hispanic research center.   Fourteen percent of the one million Mexicans who returned to their home country since 2009 said they did so … END_OF_DOCUMENT_TOKEN_TO_BE_REPLACED

By Jacob Collins |Asst. Online Editor| A statewide AMBER Alert, on Monday, March 9 ended the same evening. One-year-old Jayden Nathaniel Santiago was allegedly abducted by his father and is now in custody of U.S. Marshals in Tijuana, Mexico according to KTLA 5. The AMBER Alert was issued in the early afternoon in San Pedro after the child was last seen around 1:30 a.m., according to police. The AMBER Alert stated the suspect may be headed to Washington State or Mexico. Jayden's father, Giovany Santiago-Enriquez, is accused of abducting the child after allegedly stabbing his ex-girlfriend's boyfriend according to the Los Angeles Police Department (LAPD). "Giovanny … END_OF_DOCUMENT_TOKEN_TO_BE_REPLACED

By Ayumi Yoshihama |Staff Writer| There are many different countries you can choose from the Study Abroad programs at CSUSB that the World Language Department offers. One of the programs offers students the opportunity to study overseas in Japan. I interviewed Christopher Garcia, a CSUSB alumnus with an international business degree, who is currently working in Japan. He went to study abroad in Japan during Spring 2012 after he found out about the program from one of his classes. The Study Abroad program was for students to improve Japanese language skills and obtain credits for their degree. He was interested in Japanese culture, had been studying the Japanese language for … END_OF_DOCUMENT_TOKEN_TO_BE_REPLACED

By Yara Del Rio-Dominguez |Staff Writer| Former high desert resident Charles Ray Merritt, 47, was arrested on suspicion of killing family of four. "Investigators received over 250 anonymous tips via e-mail, WeTip, and phone calls," according to San Bernardino County Sheriff John McMahon "More than 4,500 pages of investigative documents were compiled, 60 search warrants and more than 200 interviews were conducted before Merritt was arrested. According to vvdailypress.com, Merritt had told The Daily Press, his former business partner Joesph McStay had disappeared, leaving undisclosed information about an ongoing project they were working on together for a restaurant at the Green Tree … END_OF_DOCUMENT_TOKEN_TO_BE_REPLACED

by Essence Dennis |Staff Writer| Mexico legalizes Vigilantism (Jan. 27) Mexico has legalized vigilantes after they captured a cartel leader. The self-appointed group of citizens captured “four top leaders” from the drug cartel known as “Knights Templar.” The government allowed the group to become part of a civilian group referred to as “Rural Defense Corps.” “I believe this is a really positive thing that’s happening in Mexico, the cartels are a big problem and the police (that aren’t corrupt) need help,” said student Miguel Rincon Jr. Incredible findings in sloth fur (Jan. 28) Sloth fur has been found to have a type of fungi that carries anti-parasitic, anti-cancer and … END_OF_DOCUMENT_TOKEN_TO_BE_REPLACED

By Joel Hanke | Staff Writer | Mexican culture and tradition sweeps John M. Pfau Library off its feet for the Dia de Los Muertos holiday. Pfau Library’s noontime lecture honored Mexican heritage this past week by hosting two events demonstrating Hispanic art, music and cultural tradition. The first event, “Celebramos A Mexico” was hosted by professional artist Nancy Nieto on Oct. 28 from 12 to 1 p.m. to explore the many aspects important to the Mexican heritage like art and music. Nieto graduated from UCSB with an art degree in drawing and painting. She lived in Mexico City for over 20 years which influenced her artwork with Mexican/Aztec heritage, revolutionary figures and … END_OF_DOCUMENT_TOKEN_TO_BE_REPLACED

By Aimee Villalpando |Staff Writer| The Mexico Barbie from Mattel’s “Dolls of the World” collection raised eyebrows when she debuted in a pink ruffle dress that included a passport and small Chihuahua. The initial purpose of “Dolls of the World” was “to celebrate cultural differences and tradition, introducing girls to the world through play,” said Mattel in a statement released to The Huffington Post. However, concerns regarding outdated stereotypes falsely portraying “traditional” Mexican culture have been increasingly expressed with the release of this line of dolls. All dolls were accompanied by a “furry friend” and a passport. Yet the animal chosen for the Mexico doll has … END_OF_DOCUMENT_TOKEN_TO_BE_REPLACED