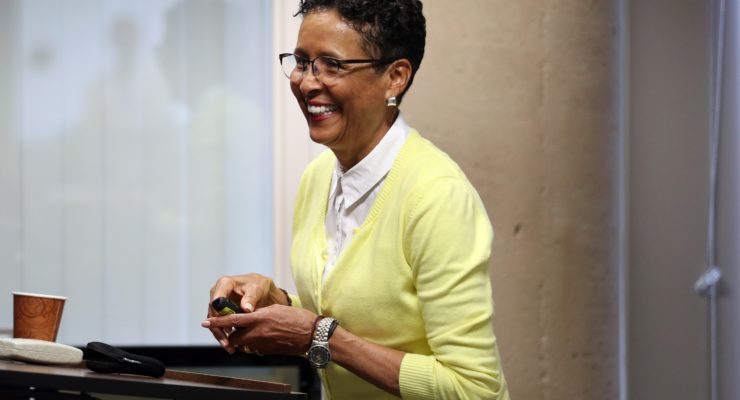 Dr. Mary Texeira has been a sociology professor at CSUSB for nearly 19 years. In the 1970s, she went into law enforcement at 21 years old. As a professor, she specializes in social inequality, race and ethnicity, class, and gender and sexuality.  Q: How was your experience in law enforcement when you first started? A: I thought it was really exciting. But there's always the sexism and racism that you deal with, not from the people on the streets, but from your fellow officers. My role to getting into law enforcement had to do with a court order. The court ordered police fitnesses in the 1970s, and courts were ordering police departments to diversify their departments, not just racially … END_OF_DOCUMENT_TOKEN_TO_BE_REPLACED

By Joshua Adamson |Staff Writer| Protests erupted in El Cajon after the fatal police shooting of an unarmed black man last month. Alfred Olango, 38, was shot and killed by police after his sister had called the police to assist in subduing her brother. These protests in El Cajon are the latest of a series of demonstrations against recent police shootings of unarmed black men, following similar protests in other states like Louisiana and New York. Brian Levin, director of the CSUSB Center for the Study of Hate and Extremism, stated that hundreds of civilians have been involved in fatal interactions with police in 2016. "So far this year over 700 civilians have been killed in … END_OF_DOCUMENT_TOKEN_TO_BE_REPLACED

By Carolyn Solar |Staff Writer| In response to the San Bernardino mass shooting on Dec. 2, 2015, the FBI asked Apple to design a software that would allow them to gain access to the iPhones used by shooters Syed Farook and his wife Tashfeen Malik. Apple is refusing to cooperate with the demands the court has ordered. With access to the phone, the FBI is hoping to find out whether others were involved in the attack. Specifically, the FBI wants the company to disable the feature that wipes an iPhone clean after 10 password entry attempts. In a situation as severe as this one, why is Apple refusing to assist the government? Unlocking the device would allow FBI access to … END_OF_DOCUMENT_TOKEN_TO_BE_REPLACED

By Rachel Rundengan |Staff Writer| A woman found dead in jail, a man suddenly immobilized shortly after his arrest, a man with a medical condition found on the floor of a jail due to negligence, a girl arrived at a juvenile detention only to be taken to a morgue the next day. Death, while in police custody, is needless to say, always very controversial. “A total of 4,446 inmate[s] died in 2013 – an increase of 131 deaths from 2012,” according to the Bureau of Justice Statistics Report on Arrest-Related Deaths (ARD). When ARD occur, many different reactions take place within law enforcement, medical community, and public. Though they might come up with various interesting … END_OF_DOCUMENT_TOKEN_TO_BE_REPLACED

By Marco Montoya |Staff Writer| San Bernardino Mayor Carey Davis outlined his goals that he claims will help the city rise out of bankruptcy. According to The Sun, he referred to his plans as “the seven strategies,” which he organized with the help of suggestions by residents collected through five meetings throughout the year.   Davis held an “Evening with the Mayor” talk on Oct. 27 at Jovi’s Diner. The meetings are held for Davis to speak on topics involving the city and encourage resident participation and attendance.   One of Davis’ plans is to make the Carousal Mall more alluring, with a new floor plan and revamped stores he hopes will bring attention back to … END_OF_DOCUMENT_TOKEN_TO_BE_REPLACED

By Daniel DeMarco |Copy Editor| Some people want more from their entertainment than, well, entertainment. Unfortunately for those people, fulfilling that need can prove difficult due to the obvious reason that this sort of product is much more artistically demanding to make and thus, not abundant in supply, but also because the spotlight is often reserved for the worst of the worst in radio pop music, reality television, and further simple-minded entertainment. “The Wire” is routinely included in the lineup of countdowns for “the greatest television show/drama ever.” Entertainment Weekly announced it as number one on their list in 2013. On IMDb, the series holds a … END_OF_DOCUMENT_TOKEN_TO_BE_REPLACED

By Adrian Carlos |Staff Writer| Shots being fired and stress levels rising, sirens screaming, walking into a bullet-eaten house or maybe cautiously escorting an inmate to court. These are just a few of the things the Criminal Justice Club (CJC) members may experience in their future careers. The club is a resourceful, hands-on group of students who are involved with community service on campus and throughout the Inland Empire. They are committed to helping and assisting anyone interested in finding the information they seek about the field of criminal justice. According to club president Gina Adame, the clubs roster is around 120 students and is still growing. Deborah … END_OF_DOCUMENT_TOKEN_TO_BE_REPLACED

Mariela Limon |Staff Writer| The nation will be hit with $85 billion of automatic spending cuts beginning March 1, threatening jobs and funding nationwide, unless Congress agrees on a resolution plan to avoid cuts. According to a White House blog, “Congress passed a law saying that if they couldn’t agree on a plan to reduce our deficit by $4 trillion – including the $2.5 trillion in deficit reduction lawmakers in both parties have already accomplished over the last few years – about $1 trillion in automatic, arbitrary cuts would start to take effect this year.” If no action is taken, the proposed cuts will affect domestic and defense spending. White House officials released a … END_OF_DOCUMENT_TOKEN_TO_BE_REPLACED