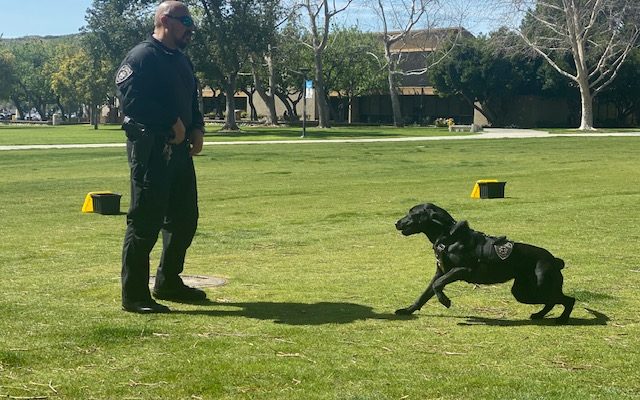 On Tuesday, March 5, Officer Manuel Aguirre demonstrated explosive detection on the Pfau Library lawn area and shared his daily routine with his K-9, Vader. Vader is a two year old Labrador Retriever and specializes in explosive detection with his partner Officer Aguirre. Vader had the opportunity to train with LAPD in the past and also interacts very well with other dogs. Officer Aguirre shared some insights on what it is like for him working for the police department and with his K-9.   Q: How long have you been a police officer in San Bernardino? A: I’ve been a police officer for over 15 years, and I’ve been here on campus for a little over three years now. Q: What … END_OF_DOCUMENT_TOKEN_TO_BE_REPLACED

By Krystina Pedersen |Staff Writer| CSUSB is bringing campus safety to a whole new level by adding a K-9 to the university’s police department. Chevy, a 2-year-old 80-pound German shepherd, was brought to CSUSB from Little Rock, Arkansas through grants, private donations and fundraisers held by the women’s cross country team. Chevy is not your stereotypical attack dog that is trained to bite on command; he is in the process of being trained to detect explosives and ammunition. “Campuses are a target for terrorist threats; by having Chevy who specializes in detecting explosives and ammunition, we increase campus safety,” said officer Helen Skaggss. Skaggs is not only Chevy’s … END_OF_DOCUMENT_TOKEN_TO_BE_REPLACED