By Marlyn Rodriguez |Opinions Editor| CSUSB conducted an Active Shooter Preparedness exercise on Thursday, April 10, at 10:30 a.m. in front of University Hall. Although the specific point of attack took place in one building, the exercise was campus wide. Depending on the circumstances, campus police advise students to either evacuate or seek shelter when this type of situation occurs. “A situation like this occurs on university campuses and throughout the community. We need to make ourselves aware and prepare for the general circumstances,” said Police Chief Jimmie Brown. Brown added that the importance of this simulation is to “make sure that the campus is ready in a situation of … END_OF_DOCUMENT_TOKEN_TO_BE_REPLACED 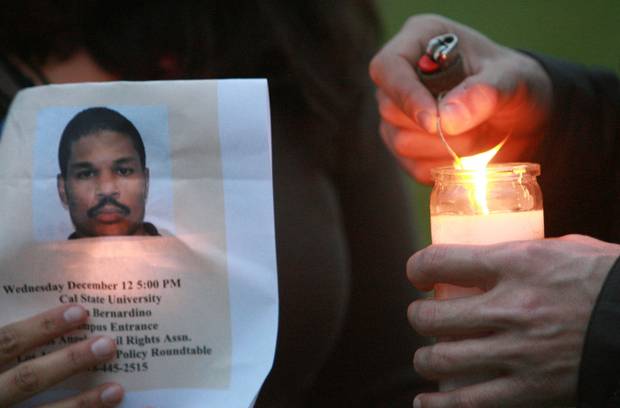 Mariela Limon |Staff Writer| The parents of Bartholomew Williams, who was shot and killed on campus Dec. 8, have filed a lawsuit against CSUSB for wrongful death and seven other claims on March 5. Barbara and Paul Williams’ lawsuit, filed in a Los Angeles federal court, also named the state and CSUSB Police Chief Jimmie Brown as defendants. The parents are seeking an undetermined amount of compensatory damages. CSUSB officials were aware that Williams, 38, was bipolar and was registered as a student with disabilities, claimed the lawsuit. The Press Enterprise reports that in an interview, James DeSimone, the plaintiffs’ attorney, said, “The university had advance notice that … END_OF_DOCUMENT_TOKEN_TO_BE_REPLACED

By Luz Hernandez |Staff Writer| A 38-year-old Cal State San Bernardino graduate student was shot and killed by campus police on Dec. 8. Bartholomew Williams died during an altercation with campus police, just after the CSUSB Commencement Ceremonies. The tragedy has left students, faculty and staff at CSUSB in shock. University officials have been holding open forums for members of our university community to express their sentiments and concerns regarding the shooting. They began having these forums in December shortly after the tragedy occurred. The goal of these forums is to keep an open line of communication between the university community and university officials regarding the … END_OF_DOCUMENT_TOKEN_TO_BE_REPLACED

By Christopher Johnson |Staff Writer| CSUSB’s Police Chief Jimmie Brown was selected by Campus Safety Magazine as the recipient of the 2010 Campus Safety Director of the Year Award. “I’m still in shock. This is a great thing for (the) CSU system, CSUSB, and (the) police department, but it’s not about me,” said Brown. “It’s about the great men and women in our department.” The nomination for this award came after CSUSB saw a 15 percent decrease in property crimes on campus over the past year, according to the CSUSB news website. Brown has been an active police chief partnering with the San Bernardino Unified School District, San Bernardino County Public Defender’s investigation … END_OF_DOCUMENT_TOKEN_TO_BE_REPLACED