By Noemi Garcia |Staff Writer| Professors Dany Doureiri, Brian Janiskee and Cynthia Cotter were named this year’s CSUSB’s professors of the year.     Dourer, who teaches Arab studies, was awarded the Golden Apple award.   The Golden Apple award was initiated in 1986 and is considered to be a prestigious teaching award.   It is a tradition that the receiver of the award is surprised during his or her class along with past Golden Apple recipients.   When Doueriri initially saw President Dr. Tomas Morales enter his class room he was originally alarmed and even said, “I didn’t do it. My name is Dany, not Osama, guys,” making Morales and the … END_OF_DOCUMENT_TOKEN_TO_BE_REPLACED 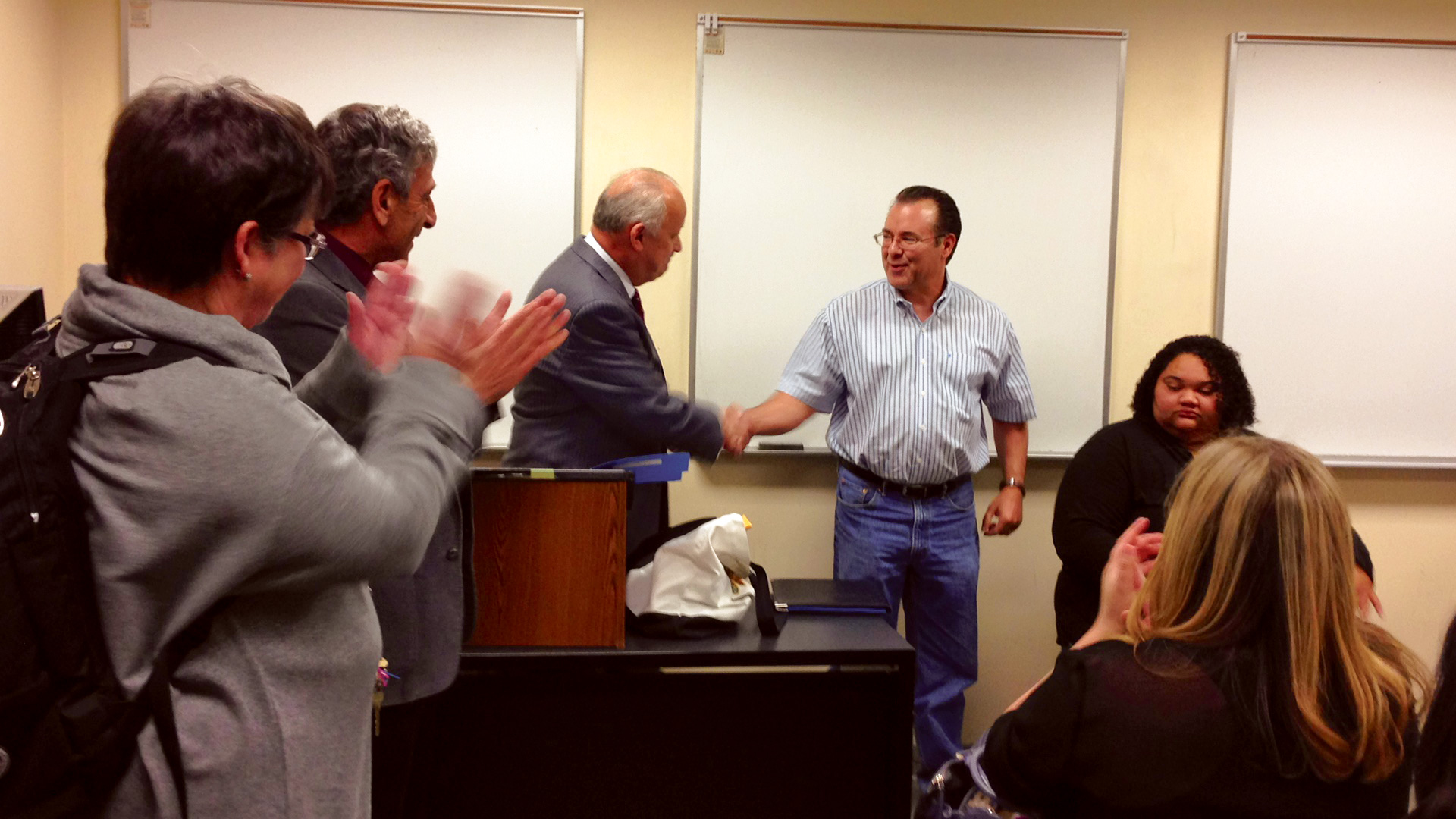 By Marlyn Rodriguez |Managing Editor| On Tuesday, March 3, Tom Long, CSUSB associate professor of history, was ambushed during his Historical Documentaries lecture and awarded the Golden Apple Award. For the CSUSB community, the Golden Apple Award is also known as the Outstanding Professor of the year award, according to the San Bernardino Sun. The decision of who becomes the professor of the year is solely up to students and alumni who nominate the professor by writing recommendations. Every year, there is a traditional ambushing where the CSUSB president interrupts the professor’s class to present him with the award. This has been a tradition since the early 1990s. Along … END_OF_DOCUMENT_TOKEN_TO_BE_REPLACED

By Gloria Gutierrez |Staff Writer| The prestigious Golden Apple Award was awarded to chemistry professor Dr. Larry Mink by CSUSB President Tomas D. Morales on Wednesday, Jan. 22. Past winners, faculty and committee members of the Golden Apple Award gathered in the prestigious professor’s office to continue the tradition of marching into the winner’s class to announce the news. The “ambush” occurred at about 1:30 p.m. in the middle of Mink’s Chemistry 216 lecture. The entire lecture hall of students and faculty applauded as Morales announced, “It’s my pleasure to share with you that Larry Mink has been awarded this year’s Golden Apple Award, which is the highest teaching award that this … END_OF_DOCUMENT_TOKEN_TO_BE_REPLACED

By Marc Olivier Drouin |Staff Writer| The Outstanding Professor Selection Committee invites CSUSB students to nominate the professor they think deserve the Outstanding Professor Award (OPA). The OPA rewards a professor that is recognized for their excellence in teaching. This award is basically one of the biggest distinctions a professor can have in their career – this is like the Grammy Lifetime Achievement Award of education! Besides being considered a prominent professor, the selected faculty member also receives prizes; such as a $1,000 check and a $3,000 Faculty Professional Development grant for purposes of research and professional activities. Moreover, the OPA winner will … END_OF_DOCUMENT_TOKEN_TO_BE_REPLACED

By Jacqueline Scholten |Staff Writer| Dr. Amanda Wilcox-Herzog, professor of human development, received the most coveted award of her career during a surprise visit by President Dr. Albert K. Karnig and his entourage on Jan. 19. Wilcox-Herzog received the prestigious Golden Apple Award, which is given to the most outstanding teacher of the year at CSUSB. The criteria for picking this teacher is gathered in a large part from the students evaluations they submit. It is also based on the diversity of the courses and labs that they offer. The winner is chosen by Karnig who is advised by a committee of seven teachers, who have either won the Golden Apple in the past or were elected on … END_OF_DOCUMENT_TOKEN_TO_BE_REPLACED