By Ezequiel Ramos |Staff Writer| From weight jokes to race jokes, Kane had it all when he was on stage at the Ontario Improv on Saturday, Oct. 4. “Comedy is my way of making people forget they had problems for about an hour,” comedian Colin Kane states. Kane is an up-and-coming comedian out of Los Angeles who has a lot to offer in the community of comedy. He will be starring in a film with well-known comedian Kevin Hart that is set to be released some time next year. “If anyone gets offended, please get the f*** out of here,” Kane blatantly stated. As he walked onto the dimly lit stage for the first time that night, he played the song, “Turn Down For What,” dancing as if he was in a … END_OF_DOCUMENT_TOKEN_TO_BE_REPLACED

By Chrisoula Baroudos |Staff Writer| New up and coming L.A. comedian, Chris D’Elia, had the crowd in tears on Friday, Feb. 21 at the Irvine Improv. “It’s hard for me to write a joke where I don’t end up on the ground for some reason. Hey, at least that way, I know no comics will steal my jokes. Too many bruises.” said D’Elia. The line wrapped around the whole building to see this hot, new comedian perform his set. The room was completely packed and all the seats were filled within five minutes. Everybody was itching to see D’Elia. D’Elia has been recently named one of the Variety’s “Top 10 Comics to Watch.” He previously starred opposite Whitney Cummings on NBC’s … END_OF_DOCUMENT_TOKEN_TO_BE_REPLACED

By Mintimer Avila |Staff Writer| Emmet is the most average Lego ever, now he’s entrusted with saving the world. “The Lego Movie” is set to be one of the biggest block-busters for 2014, opening with $69 million in the first week, according to Forbes.com. The movie premiered on Feb. 7, and was directed by Phil Lord and Christopher Miller. This action packed film will please anyone who enjoys a good story filled with romance, suspense and non-stop humor. When asked about the inspiration for the movie Lord and Miller replied, “We started watching these brick films that people make in their basements and the stop motion shorts they posted online. They’re just so creative, clever … END_OF_DOCUMENT_TOKEN_TO_BE_REPLACED 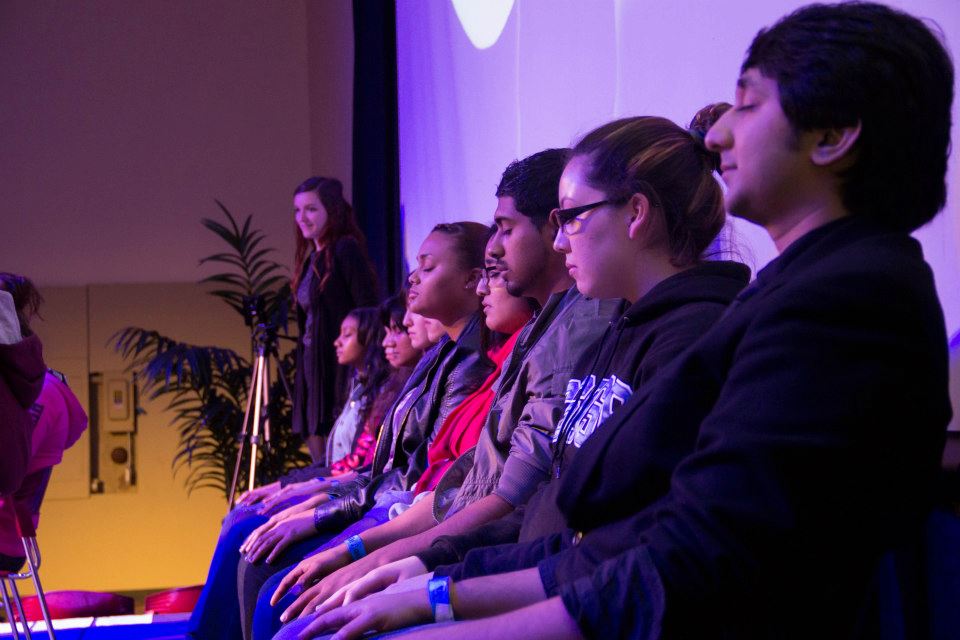 By Mike Sessions |Staff Writer| If you haven't experienced Hypnotic, then you haven't experienced life. And no, that is not a reference to the alcoholic beverage. The show was presented by the Program Board of the Santos Manuel Student Union. It was a very successful show to say the least because the Events Center nearly reached capacity for those waiting for a little something called hypnotism. "If you plan on participating in the show, I'd advise you use the restroom now," echoes a calm, yet stern voice. Meet Twy, a certified hypnotherapist. His chin shoots out a long, pointy beard, eyes sheltered away from colored shades and a head as bald as an eagle. Twy convinces the … END_OF_DOCUMENT_TOKEN_TO_BE_REPLACED

By Manal Museitef |Staff Writer| The halls of the CSUSB Performing Arts Building echoed with laughter this past weekend. Redlands-based improv group Sha’Dynasty paid a visit to the campus on April 20 and 21 to dish out some comedy goodness to a receptive crowd. Accustomed to their regular performances at the Redlands Fox Theater, the group was admittedly nervous at first, but the refreshing Coyote crowd killed their nerves quickly. “It was nerve racking [performing] in the presence of a college but it was much more intimate,” said Sha’Dynasty group member John “The Tank” Johnson. “The laughter was louder and you can see the reactions of the audience much closer.” The group is … END_OF_DOCUMENT_TOKEN_TO_BE_REPLACED

By Sharonda Harris |Staff Writer| With finals approaching, students were able to momentarily forget about exams, and laugh their butts off. Associated Student Incorporated (ASI) hosted it’s annual ‘Comedy Den’ on March 8. Nick Kendle, vice president of university affairs, decided that the ‘Comedy Dens’ should be held each quarter, contrary to the and far spaced scheduling of the event in the past. “These quarterly comedy dens are a way to help people relieve right before fi - nals; and it helps when you can laugh and forget about high gas prices, tuition, and test,” said Kendle. This Comedy Den featured comedienne and MC Cocoa Brown. “What I liked best about this event was … END_OF_DOCUMENT_TOKEN_TO_BE_REPLACED