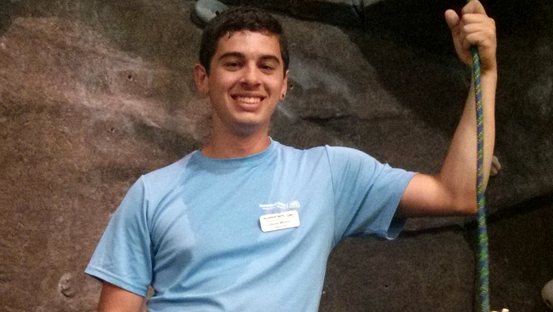 By Shane Burrell |Sports Editor| CSUSB Student Recreation and Fitness Center, referred to as the Rec Center, has a position available for rock climbing enthusiasts seeking work on campus. The Rec Center and rock all staff are looking for another member to be a part of their team as the new rock wall instructor.  The rock wall is 1,000 square feet, 34 feet high and is open for all students and members of the Rec Center. The Rec Center provides shoes, harnesses, and chalk bags for anyone that is willing to climb after the informative session that provides detailed rules and safety tips for all participants. Although climbing the wall serves as a recreational activity for some … END_OF_DOCUMENT_TOKEN_TO_BE_REPLACED

By Shelby Hancock |Staff Writer| The Climbing Wall Campout, originally scheduled for Friday, Feb. 6 was cancelled due to lack of sign ups, officials said. This event was set to take place on the rockwall located inside the Student Recreation and Fitness Center, referred to by students as “the Rec Center.” Some students felt that the event was not adequately promoted, and said the lack of publicity may have been a cause of the cancellation. “I went to sign up on Thursday after my friend had told me about it but was turned away and told I missed the deadline,” said Rebecca Frey. LaterThursday night, students who signed up received an email stating, “I regret to inform you that … END_OF_DOCUMENT_TOKEN_TO_BE_REPLACED