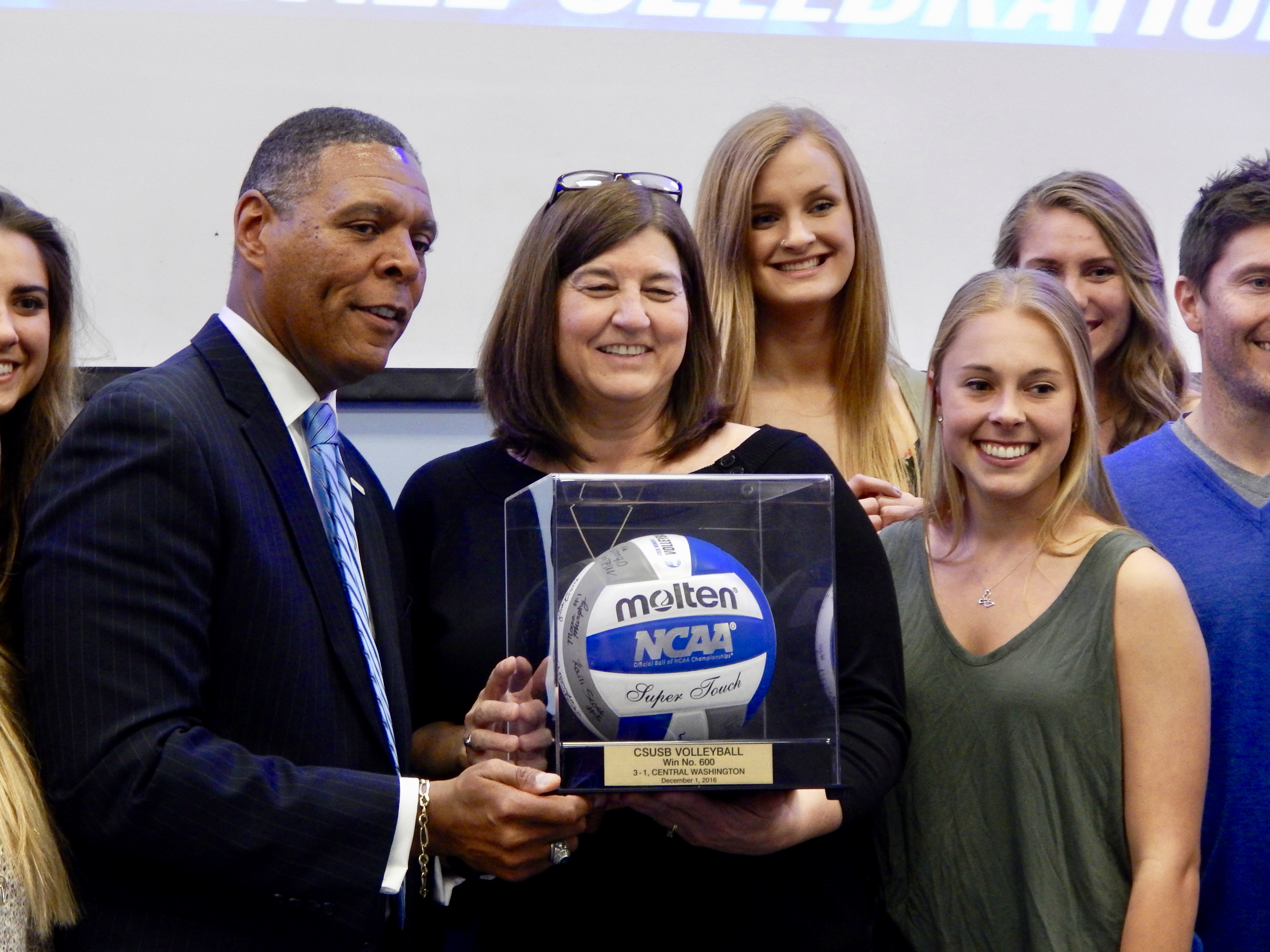 By Lauren Jennings |Sports Editor| The final win of the volleyball teams' 2016 season was a big one, both for the school and for head coach Kim Cherniss. The win against Central Washington University in the NCAA West Regional was Cherniss' 600th with the Coyotes. To celebrate such a historic moment, the Coyote Athletics Department hosted an event featuring a legacy video and an award presentation. Current and former team members attended the event along with coaches from other Coyote sports teams, the vice president of Student Affairs, Athletic Department employees and former university president Albert Karnig. "It's really a special today for me to have president Karnig and his … END_OF_DOCUMENT_TOKEN_TO_BE_REPLACED

By Shelby Hancock |Asst Sports Editor| As students wind down for the summer, CSUSB Athletics is preparing for their upcoming seasons. Fall 2015 CSUSB welcomes back men and women's soccer and volleyball. The men's soccer team looks to improve and devote most of their energy to developing their roster on hand. "Fortunately for us we did not lose a lot of players to graduation but we feel we have successfully replaced the ones we did lose and look to make gains moving forward," according to head coach Stephen Ralos. After ending their 2014-2015 season with 9-5-2.  the team is looking forward to next season. "We feel good about the upcoming season. We are returning a large … END_OF_DOCUMENT_TOKEN_TO_BE_REPLACED

By Richard Burrud | Staff Writer | Coyote Women’s Volleyball team is still undefeated in the California Collegiate Athletic Association (CCAA) with a 9-0 record coming into Saturday’s game against CSU East Bay who is 2-7 in Conference play. The Coyotes and Pioneers played three sets; the Coyotes were too much to handle for the Pioneers winning all three sets. Player of the Week Tori May and sophomore Brenna McIntosh were the standout Coyotes who led the game with 27 combined kills against the Pioneers. The night began with a kill by Alexandra Torline, and May was able to make a kill bringing the game tied to 12. Outside hitter Kaitlyn Christner made a big time solo block to … END_OF_DOCUMENT_TOKEN_TO_BE_REPLACED

By Shane Burrell |Staff Writer| Coyotes show off their athletic skills and competitiveness competing in this quarter’s intramural volleyball events who have a new champion. The team Kiss my Ace, took the A league finals against team Take Notes this past Tuesday May 28, with a score of 15-11 the first game, 9-15 in the second and 25-20 in the third, winning best two out of three. Krystal Nunez, Kasi Kauvaka, Jonny Tuitavke, Kasandra Ramos, Jasmin Keller, and Sal Aguilar, played on team Kiss my Ace. In addition, players of team Take Notes include Angel Lizarde and Breanna Marrefo, although they did not win the championship they were able to give Kiss my Ace a run for their … END_OF_DOCUMENT_TOKEN_TO_BE_REPLACED

By Megan Acuna | Staff Writer | As if a CCAA championship was not enough to keep the spirits of our women’s volleyball team high, it was recently announced that five players have also earned All-CCAA honors. Those who earned first-team honors were senior setter Camille Smith, senior middle blocker Mercedes Winchester and freshman outside hitter Alexandra Torline. Second-team honors were granted to freshman middle blocker Brenna McIntosh and sophomore libero Arielle McCullough. According to Mark Reinhiller, the quintet was instrumental in the Coyotes earning their seventh straight CCAA title, 13th consecutive NCAA Tournament berth and providing coach Kim Cherniss with her 16th … END_OF_DOCUMENT_TOKEN_TO_BE_REPLACED

By Devan Lee |Staff Writer| CSUSB Women’s Volleyball won the opening match against Central Washington in the 2012 NCAA Western Regional. Their recent victory has pleased head coach Kim Cherniss, who expects a great deal from her girls. “I’m very happy to have this winning traditon continue,” said Cherniss. The Lady Yotes traveled all the way to Laie, Hawaii on Nov. 29th. They faced a Central Washington Wildcat team that went into the game with an overall record of 28 wins and 7 losses. A cocktail of fresh and veteran talent made it possible for the Coyotes to pull a 3-2 come from behind victory against the Wildcats. Freshman outside hitter Alexandria Torline had a season … END_OF_DOCUMENT_TOKEN_TO_BE_REPLACED

By Megan Acuna |Staff Writer| Our Coyote volleyball team landed first place in their conference after they ended the first half of CCAA play despite their weekend loss to Cal State East Bay and comeback win against Cal State Monterey Bay Oct. 12 and Oct. 13. After an eight game winning streak, the Lady Yotes gave up a win at home in the Coussoulis Arena in an intense game against Cal State East Bay that went all the way to the fifth set. Head Coach Kim Cherniss believes this loss hasn't affected the team's momentum. "It was a wake up call and a learning experience. The girls took the loss to heart and the intensity during practice is very high," said Cherniss. The Coyotes had … END_OF_DOCUMENT_TOKEN_TO_BE_REPLACED

By Ryan Libby |Staff Writer| Woman’s Volleyball Coach Kim Cherniss has built a dynasty here at CSUSB. Now in her 22nd year, Cherniss continues to recruit dynamic players in an effort to put together a perfect team. “We want dynamic athleticism,” said Cherniss. “Be exceptional in some regard whether it’s your jumping ability, your speed, your height, your volleyball IQ, your execution level, your experience level, be dynamic in some regard because then if you find enough of those pieces then you can put together a puzzle that has championship qualities.” It’s safe to say that the “puzzle” is slowly coming together this year. Entering this season, Cherniss has gone 123-10 since … END_OF_DOCUMENT_TOKEN_TO_BE_REPLACED

By Ryan Libby |Staff Writer| Camille Smith, a CSUSB two time All-American senior volleyball player obtains an intense style of play and defensive stands that creates dominance and momentum on the court. Momentum, that carried them all the way to a 32-1 record last season with their only loss against Concordia State in the NCAA championship game. Smith, despite having won numerous awards still has goals set up for herself this season. “Personally my goal is to make sure that I’m a great leader and take responsibility for my teammates,” said Smith. The Coyotes have a younger team than last season, with thirteen of the twenty players on the roster being freshman or … END_OF_DOCUMENT_TOKEN_TO_BE_REPLACED

By Suanna Gutierrez |Staff Writer| The House of Representatives passed a bill last week to reaffirm the nation’s motto as the phrase “In God We Trust.” While this sparks many topics to debate, it is a bill that I can support through the constant downpour of issues that seem to overwhelmingly divide us as a nation. All religious, spiritual, ethical or semantic contention aside, it is an important phrase to instill as our nations motto. It is a moral identity that should be important to all of us as Americans to protect. The phrase “In God We Trust,” to me, is a part of the timeless and revolutionary structure of America. Many nations establish a state supported religion. In addition to … END_OF_DOCUMENT_TOKEN_TO_BE_REPLACED