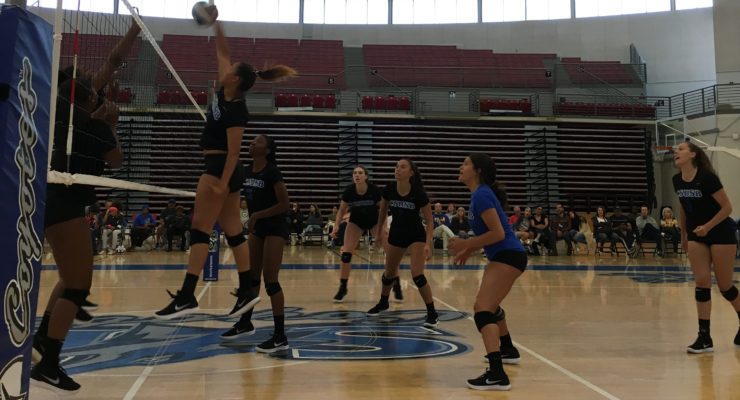 Having the longest streak at #1 in the country this past season was just another check in the box for the women's Volleyball team that fell short of advancing to Nationals. The team has made 18 straight appearances in the NCAA Regional Tournament. This last year was no exception. 19 straight The Coyote Chronicle sat down with Kaili Scott, a junior on the team who is coming back off a torn ACL to talk about their regular season as well as what is happening this spring. Did she say she tore her ACL? If you know it but she did not state it directly in the interview and give permission to release you are violating HIPPA Laws. Coyote Chronicle: Were the girls on the team satisfied … END_OF_DOCUMENT_TOKEN_TO_BE_REPLACED

By Sierra Marrero |Staff Writer|  Student Soleil Hall, had an outstanding year on the California State University San Bernardino (CSUSB) Cross Country team. With a short running career, Hall has proved that her short time being in cross country is no match for the amount of natural talent she possess. Hall explained that she came to CSUSB on a scholarship for soccer, but ended up running for CSUSB instead. This year is Hall's first to run on any cross country team. Hall explained how she got into running with only one year of running experience when she did track in high school. Hall never thought she would run again until she met head coach Tom Burleson. " I would  run … END_OF_DOCUMENT_TOKEN_TO_BE_REPLACED

By Shelby Hancock |Asst Sports Editor| As students wind down for the summer, CSUSB Athletics is preparing for their upcoming seasons. Fall 2015 CSUSB welcomes back men and women's soccer and volleyball. The men's soccer team looks to improve and devote most of their energy to developing their roster on hand. "Fortunately for us we did not lose a lot of players to graduation but we feel we have successfully replaced the ones we did lose and look to make gains moving forward," according to head coach Stephen Ralos. After ending their 2014-2015 season with 9-5-2.  the team is looking forward to next season. "We feel good about the upcoming season. We are returning a large … END_OF_DOCUMENT_TOKEN_TO_BE_REPLACED

By Maria Perry |Copy Editor| California attorney Matt McLaughlin has proposed an act that, if passed, will make sodomy between same-sex individuals a capital crime, according to Snopes.com. McLaughlin proposed the "Sodomite Suppression Act," which was received by the state's initiative coordinator at the Office of the Attorney General on Feb. 26 with $200 and initiative certification enclosed. It hopes to make it legal to execute gay individuals, according to The Huffington Post. The "Sodomite Suppression Act," which McLaughlin has sent to the state Department of Justice, will not only punish gays but also those who engage in sodomy, according to the the act's initiative. One … END_OF_DOCUMENT_TOKEN_TO_BE_REPLACED

By Shane Burrell |Sports Editor| CSUSB athletics will feel a hard hit from the athletic department when our current water polo team is replaced with an all women’s track and field team. The shocking announcement to cut the sport was made March 21 by Director of athletics, Dr. Kevin Hatcher and Mark Reinhiller, Associate of Media relations. Hatcher states the decision was made in the best interest of the communities and high schools of incoming students. “Track and field is the single largest high school sport for young women in our immediate recruiting area of the Inland Empire,” stated Hatcher. The reason behind the switch seems to be the new additions that will be added to … END_OF_DOCUMENT_TOKEN_TO_BE_REPLACED

By Adrian Carlos |Staff Writer| Endless Starbucks line, building frustration from waiting for a parking spot that seems will never appear and waking up frantically in the Student Union after over-sleeping. These are just a few of the things that unite us as students and characterize CSUSB pride. What makes CSUSB students different from students from other universities? I asked students around campus to give me their opinion on what embodies the students here. You know you're a CSUSB student when... "You see the sun come and go down on the same day from the library," said Ivanna Carlos. "When your favorite color and all your clothes are now blue," said Quinn … END_OF_DOCUMENT_TOKEN_TO_BE_REPLACED

By Shane Burrell |Staff Writer| well, dusts off her cleats ending her last season with the Coyotes. Leffingwell ranked in the top five for overall statistics of the season, ranking third place in both RBI’s with 23 and HR’s with three. Furthermore, she earned fifth place for overall batting average of .269 and her 18 runs scored. In addition, she took fourth for overall hits with 42. The stats show that Leffingwell is a skillful player both at the plate and in the field. She made player of the week while making some of her best plays when the Coyotes faced the Stanislaus Warriors. “When we played Stanislaus and I got player of the week, on Friday I went six for seven,” said … END_OF_DOCUMENT_TOKEN_TO_BE_REPLACED

By Shane Burrell |Staff Writer| Senior driver Georgiana Bray of the Coyote water polo team, leaves her mark with a bundle of laughs and fun. Bray finished off her last season scoring 22 goals, placing sixth overall on the team. However, this was only half the number of goals she had scored when she played as a junior. Though Bray became sick in the middle of the season, she continued to practice hard and play strong. Even with the set back, she was able to earn the fourth overall spot for assists with 23, as well as tying with Katie Braun for third place with 28 steals. Despite her drop in score ranking, Bray’s assists and steals have not changed since last season making … END_OF_DOCUMENT_TOKEN_TO_BE_REPLACED

By Shane Burrell |Staff Writer| Coyote baseball completes their season with four wins in a row playing against Stanislaus State at Fiscalini field in San Bernardino. Head Coach Don Parnell can wear his Coyote cap with pride celebrating his fourth consecutive season winning 20 or more games per season. The Coyotes would start their four game winning streak sweeping the Stanislaus Warriors 9-8 on Friday, May 3, thanks to pitcher Ken Kissell who pitched six innings and had six strike outs. Kissell along with the rest of the Coyotes broke their two game losing streak, while locking in the win, in the ninth inning as junior Josh Herrera scored the last run of the game. In addition, … END_OF_DOCUMENT_TOKEN_TO_BE_REPLACED

By Shane Burrell |Staff Writer| The women’s water polo team ended their season on a sour note loosing to both Sonoma State University and Cal State East Bay on the weekend of April 27-28. Although they had a losing record it does not bring discouragement to head coach Sarah Reneker who said, “Seeing the potential I know that they have and then seeing them perform it, that’s what I think was the most fulfilling part of coaching this team.” On Saturday’s game against Sonoma State, the team fought a tough battle during the first and third quarter. The Seawolves were able to score two goals during the first quarter. Later during the second quarter senior and junior drivers Misty … END_OF_DOCUMENT_TOKEN_TO_BE_REPLACED