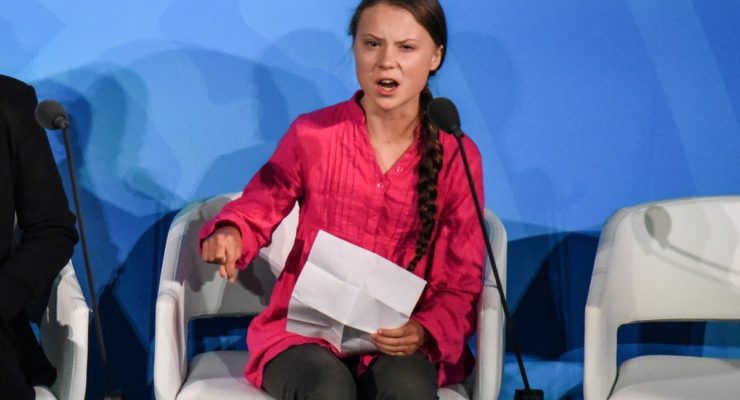 16-year old climate activist, Greta Thunberg of Stockholm, Sweden has become the subject of political debate concerning climate change. On  September 23, 2019, she gave a speech at the United Nations Climate Action Summit in New York City and called on the leaders of the world to address the growing danger of climate change.  "My message is that we'll be watching you," Thunberg said. "This is all wrong. I shouldn't be up here. I should be back in school on the other side of the ocean. Yet you all come to us young people for hope. How dare you! You have stolen my dreams and my childhood with your empty words. And yet I'm one of the lucky ones. People are suffering. People are dying. … END_OF_DOCUMENT_TOKEN_TO_BE_REPLACED 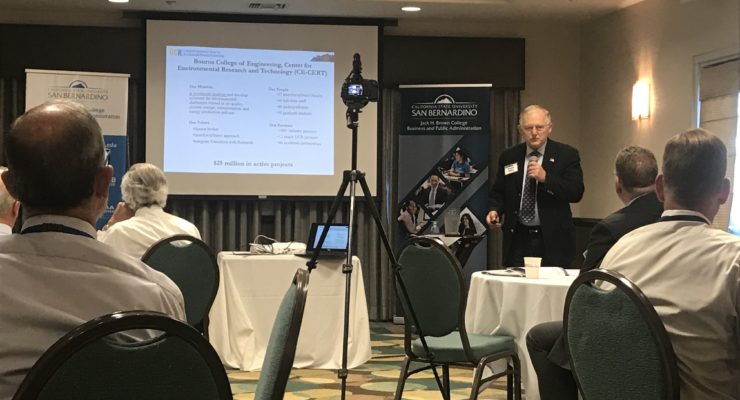 California has been setting multiple goals in hopes to combat climate change. The state has been recently hit with devastating wildfires aggravated by climate change. A new bill was signed requiring the electrification of heavy-duty vehicles by 2040. Now that the bill has been signed its time to consider what needs to be done in order to reach this goal. The transportation center here on campus has put together a series of events with speakers on reaching this goal. This six-part series was put together to get a dialogue about how the transportation industry may be putting a lot of strain on the environment. We had four different speakers from different industries that are going to … END_OF_DOCUMENT_TOKEN_TO_BE_REPLACED

By Shamce Ahmad |Staff Writer| President Donald Trump and the Office of the White House announced that they will be withdrawing the United States from the Paris Agreement on June 1. The Paris Agreement is an agreement within the United Nations Framework Convention on Climate Change (UNFCCC) that deals with greenhouse gas emission reductions, adaptation and finance towards climate healthy changes starting in the year 2020. The decision to withdraw from the agreement was largely due to the notion that the carbon reduction targets set by the previous administration were severely hurting the economic climate and job forecasts. Trump said the deal placed "draconian" financial burdens … END_OF_DOCUMENT_TOKEN_TO_BE_REPLACED

By Destiny Guzman |Staff Writer| Global warming threatens our current existence and our future generations. I believe that this problem is irreversible, but I do not believe that we should just sit around and do nothing about it. "We need to basically stop burning carbon faster than the earth can store it," said lecturer and past Air Force meteorologist Ross McIntosh. It might be nearly impossible to do this because according to "The Dangerous Myth That Climate Change Is Reversible," "We’d have to drop total global emissions to zero now and for the rest of the century just to lower concentrations enough to stop temperatures from rising." Many people believe that it is too late to … END_OF_DOCUMENT_TOKEN_TO_BE_REPLACED

By Jennifer Martinez |Staff Writer| Gov. Jerry Brown is planning to move forward with his goal of reducing California’s petroleum use in half by 2030, according to the LA Times.   Last month, Gov. Brown submitted a budget to the California State Legislature that proposed spending a third of the state’s cap-and-trade funds, which is approximately $1 billion. according to the LA Times.   Brown’s goal is to cut oil use by 50 percent and with the state’s funds, he would invest in public transportation, promoting electric vehicles, and other environmentally friendly programs.   “If you're not successful on the first go-round, it doesn't mean you abandon your … END_OF_DOCUMENT_TOKEN_TO_BE_REPLACED

By Lauren Pratt |Staff Writer| Two hundred and sixty one of 435 representatives took to action Friday, Oct. 9, in attempt to lift a 40-year-old ban on crude oil exports. The has not yet reached the Senate for approval, but in the case that it does, President Barack Obama has stated he will veto the bill. “The country needs to focus more on alternate energy (wind, solar, water),” according to the Washington Street Journal. The Energy Policy and Conservation Act of 1975 was a bill Congress passed used to stifle the harsh impact of future oil embargos (an official ban on trade) by foreign oil producing countries. The bill was enacted due to the aftermath of the 1973 Arab Oil Embargo that … END_OF_DOCUMENT_TOKEN_TO_BE_REPLACED

By Lauren Pratt |Staff Writer| Umpqua Community College; 9 dead, 7 injured (Oct. 2) Chris Harper Mercer, 26, shot and killed 10, including himself, and injured seven, at Umpqua Community College in Oregon. The lone shooter used four guns including an assault rifle to carry out his attacks on Oct. 2. Law enforcement officials have not yet confirmed if Mercer’s shooting was religiously fueled, but witnesses say before Mercer opened fire “he asked students to stand and state their religion before he began firing from point blank range,” according to the New York Daily News. Man “too high” on marijuana calls police for help (Oct. 5) According to police reports, a 22-year-old … END_OF_DOCUMENT_TOKEN_TO_BE_REPLACED

By Yara Del Rio-Dominguez  |Staff Writer| An international panel of climate scientists concluded that the Earth may enter an irreversible climate change if we don’t reduce our fossil fuel emissions. The International Panel of Climate Control (IPCC) released a report warning all countries of the need to reduce all emissions. “The burning of fossil fuels is affecting life on every continent and in the oceans and the window is closing rapidly for governments to avert catastrophic damage,” stated climate scientists in their report. We see some of the irreversible climate changes already in effect. Trapped gases have already contributed to some of the effects we see today, such as the … END_OF_DOCUMENT_TOKEN_TO_BE_REPLACED