By Gregory Gammill |Staff Writer| Women's soccer team is filled with memories of good and bad times during the past 28 seasons. Since the introduction of the team in 1988, they have been increasing their dominance with wins and tournament appearances showcasing their progress throughout the years. The team's first two seasons in '88 were lead by Ralph Perez. Perez made one of the best contributions to the Coyotes by leading them to an impressive 16-12-3 overall record. The Coyotes would move on from Perez and hire Dave Widor in 1990 who led the women's team for the next four seasons. During Widor's second season in 1991, the team would change from Division III to Division … END_OF_DOCUMENT_TOKEN_TO_BE_REPLACED

By Gregory Gammill |Staff Writer| Trainers at the Student Recreation & Wellness Center (RC) have been known to increase students athletic abilities with their advice for workout regimens, dieting and recovery. There are several health-related options that our school provides for students to enjoy and to ensure they get the best options for fitness. The RC provides our students and staff the option to get suggestions from trainers that best benefit their workouts. Gonzalo Salazar Jr. is one of 15 RC trainers available to give advice on diets, workout regiments and any types of recovery for after workouts. Salazar Jr. graduated in 2015 with a degree in Kinesiology with a … END_OF_DOCUMENT_TOKEN_TO_BE_REPLACED

By Kriston Costello |Contributing Writer| The no. 18 Coyotes continued their winning streak after their victories on Oct. 21 against the Cal State LA Golden Eagles and Oct. 22 against the Cal State Dominguez Hills Toros. The game against the Golden Eagles proved to be a difficult one. It ended after five sets that went 25-23, 27-25, 25-17, 25-20 and 17-15. The whole match was neck and neck with no clear victor until the end of the game. Defense helped the Coyotes defeat the Eagles as they led the game with 101 digs.  Five players reached double digits in digs: Jayann DeHoog (22), Abbey Vollkommer (22), Hannah Barrett (21), Lauren Nicholson (17) and Malika O’Brien … END_OF_DOCUMENT_TOKEN_TO_BE_REPLACED

By Kieron Coleman |Staff Writer| Seeing an LA Galaxy game at the StubHub Center is a big deal, but the 'Yotes playing there is an even bigger deal. The men's soccer program has had a very promising season so far, to play on such a field was an exquisite experience for the men. Many of the boys are from overseas as well as many from around California, it was an experience of a lifetime for all involved. “It was a dream come true, I’ve been waiting for this day all my life," stated midfielder Diego Casillas. The StubHub Center opened in 2003 and hosted the Major League Soccer (MLS) All-Star Game, the MLS Cup game and the Fédération Internationale de Football Association (FIFA) … END_OF_DOCUMENT_TOKEN_TO_BE_REPLACED

By Gregory Gammill |Staff Writer| A diverse group of players from the men and women soccer teams all have different backgrounds, share similarities, differences and advice for future students. The difference in lifestyle has changed for some, coming from other countries. Players Luca Falcone and Megan Todd are both relatively new to the states. Falcone is a forward on the men's team and comes from Sydney, Australia. He came to the states in 2015 at the age of 21 to play soccer for the Coyotes. Falcone is graduating this December with a degree in psychology. He hopes to pursue a master's degree in sports psychology to do research in that particular field. He is hoping to coach as … END_OF_DOCUMENT_TOKEN_TO_BE_REPLACED

By Gregory Gammill |Staff Writer|  The woman's volleyball team looks to make it back to the National Collegiate Athletic Association (NCAA) tournament under the instruction of veteran head coach Kim Cherniss. Cherniss has been the main person in charge of the volleyball team for the past 25 years and is entering her 26th year. She took over the program in 1991 and eventually brought the Coyotes back to their winning ways. Things got off to a slow start for her, but quickly picked up in 1997 when she turned the team around from a 13-15 record in 1996 to a 20-11 record in 1997. Players came and went over the years for her and the Coyotes, allowing her to move people around and … END_OF_DOCUMENT_TOKEN_TO_BE_REPLACED

By Gregory Gammill |Staff Writer| Every new college student has heard of the infamous ‘Freshman 15’ and all the negativity that comes with it. It is said that 15 pounds is supposed to be the average weight gained for all first-time college students within their first year, but is that really the truth we are being fed? “Freshman 15 is a myth: I only gained 5 pounds my freshman year. Weight gain is common in college, you’re going to be just fine,” stated Angelica Foronda. Incoming freshman will not actually gain a staggering 15 pounds of extra weight like the myth claims they will. Former alumni and a current Registered Dietitian at Kaiser Permanente Riverside, Kari Duenas, and … END_OF_DOCUMENT_TOKEN_TO_BE_REPLACED

By Gregory Gammill |Staff Writer| CSUSB has several fun sport clubs on campus, but there is only one that allows you to play Badminton with other like-minded students. Badminton sports club offers their members a unique experience to learn a sport with other Coyotes. The sport of badminton has been around more than 2,000 years and was adopted into the Olympics Games in 1992. Ashley Pena is the president of the club at CSUSB. “We are a recreational and competitive club because we allow members who wish to compete against other schools the chance to join our competitive team throughout the year," said Pena. The club participates in several different scrimmages and tournaments … END_OF_DOCUMENT_TOKEN_TO_BE_REPLACED

By Gregory Gammill |Staff Writer| The disbandment of our Coyote Tennis team left the window open for a club to establish themselves around the sport of tennis. Pack Tennis Club is hosted by students who seek for new and returning members for the sport. The club offers new and experienced tennis players an opportunity to improve their game by training and competing with fellow Coyotes. Information gathered from the club's Facebook page has indicated there are 14 members currently. Susan Proakatok is the president of the club at CSUSB. “Tennis experience isn't required; the club is for all students, regardless of experience. Some of our members can teach tennis, too," said … END_OF_DOCUMENT_TOKEN_TO_BE_REPLACED 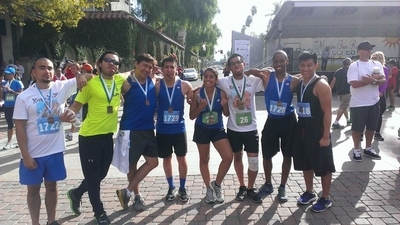 By Gregory Gammill |Staff Writer| Attention all CSUSB students, on your mark, get set…RUN! CSUSB Coyote Running Club gives males and females the opportunity to enhance the longevity of their life since it was established in May 2013. Running provides several excellent health benefits for short and long term progress. According to Runner's World, "running makes you happier, helps you get skinnier, will keep you sharper even as you age and reduces your risk of cancer." Corey Moody is the current president of the Coyote Running Club. “Our goal is to provide a safe and friendly community for running enthusiasts to become a part of. We also serve as a platform for men and women … END_OF_DOCUMENT_TOKEN_TO_BE_REPLACED