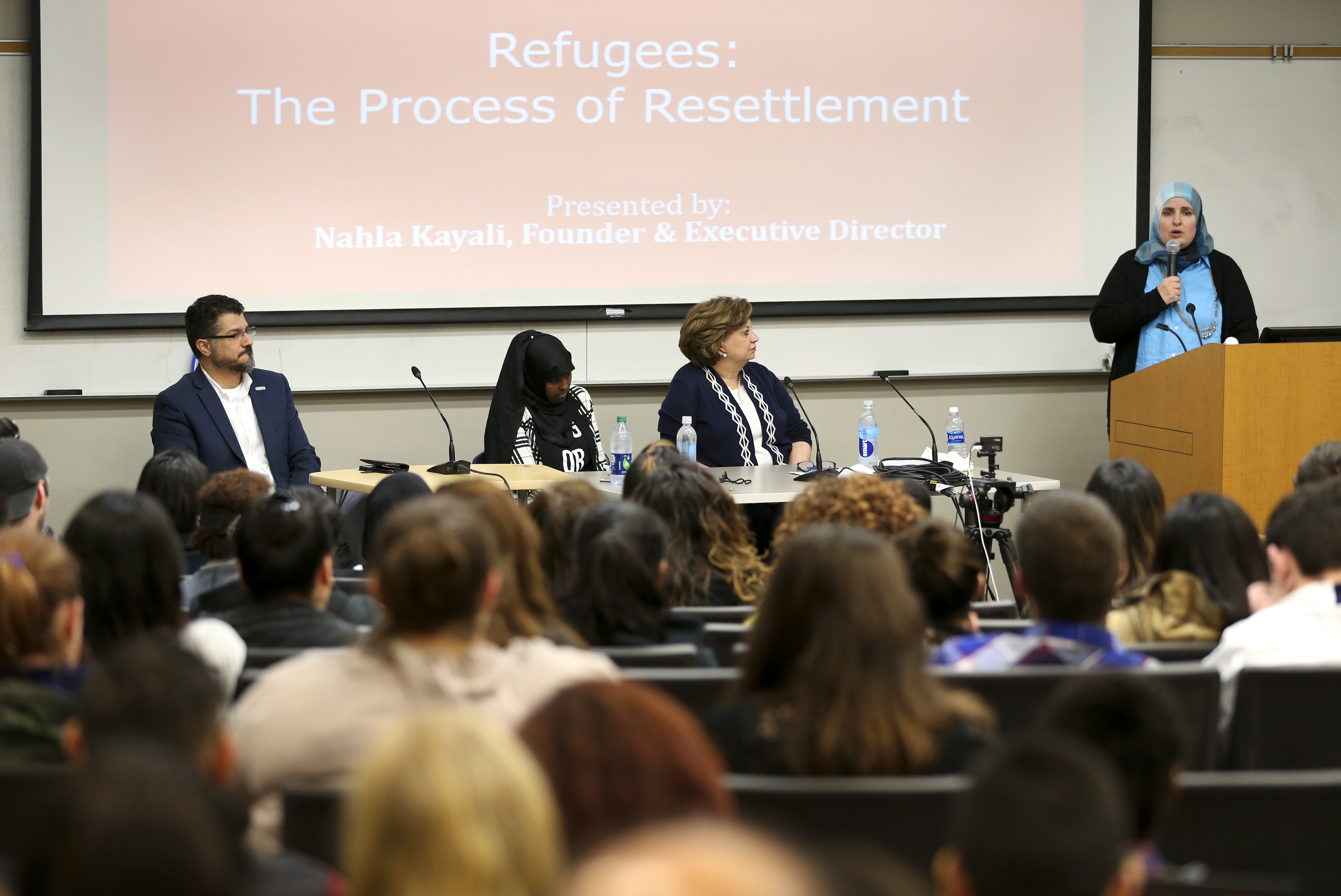 By Noe Ramos |Staff Writer| Students, faculty, and community members gathered to discuss "Who Are the Refugees?", a panel event focused on bringing awareness and attention to the refugee crisis. The event took place in the College of Education on Feb. 21 and was hosted by the Center of Islamic and Middle Eastern Studies and sponsored by the University Diversity Committee, the Department of Communication Studies, the Mediterranean Studies Academy, and the Muslim Students Association. The key points discussed in the panel were who were the refugees, why do they come here, what are some of the challenges that they face, and how do they come the United States. The three guest … END_OF_DOCUMENT_TOKEN_TO_BE_REPLACED

By Hairuo Yi |Staff Writer| Juanito’s Tacos, located in Highland, is a family owned restaurant which has been attracting people’s attention with its special flavors of their homemade sauces. Kimberlyn Cruz, restaurant server, talks about her family-owned restaurant, where all the food is cooked by her mother with a homemade style. “First it started with my family and I, then we later grew causing us  to get a little bit more help with family members outside the inner group,” said Kimberlyn. The restaurant had been open for seven years, but before that they used to sell street tacos from their home. “A year before we opened, we used to sell tacos from our house, street tacos. … END_OF_DOCUMENT_TOKEN_TO_BE_REPLACED

By Zhiying Xu |Staff Writer| Pinnacle Peak Steak house is a cowboy themed restaurant attracting local residents’ attention around San Bernardino with its cowboy décor, steak and reasonable prices. For over 40 years, Pinnacle Peak has been serving steaks to generations of loyal customers. “We are famous for our cowboy steak and T-bone steak...we also have amazing deserts,” said Pinnacle Peak employee, Tina Evans.” These steaks are not only attracting local residents, they are also attracting some students. “I asked for recommendation and they told me to get the T-bone steak. It tasted very good and the steak was a generous amount,” said student Ruheng Zhao. “I ordered a … END_OF_DOCUMENT_TOKEN_TO_BE_REPLACED

By Jaeyeon Kim |Staff Writer| Comic books have been produced by lots of comic book companies, such as DC Comics, Marvel Comics, Dark Horse Comics, as well as many others. Comics have affected cultures in many ways for a long time. One of the affected cultures is the movie industry. Many movies have been produced based on comic books, such as Batman and Superman. “Batman and Superman have infiltrated every major form of entertainment in America, except for the music industry,” according to Teen Ink. Like Batman and Superman, America has many superhero movies, such as those featuring Iron Man, Hulk, Thor, and Avengers. As these superhero comic books and movies have become … END_OF_DOCUMENT_TOKEN_TO_BE_REPLACED

By Javier Rodriguez |Staff Writer| The NFL's most recent cases of domestic violence seem to be getting pushed against the backburner and resulting in a slap on the wrist. Former Baltimore Ravens Running Back Ray Rice, was suspended for two games after rendering his then fiancée unconscious in an elevator, before leaving a hotel in Atlantic City, NJ, earlier this year. Since Rice's alleged assault with his then fiancée Janay Palmer, Rice said, "his actions were 'inexcusable' and that he and his wife were in counseling," according to CNN reporter Jill Martin. Rice is just one of many alleged abusers within the NFL along with Ray McDonald, Greg Hardy, A. J. Jefferson, Robert … END_OF_DOCUMENT_TOKEN_TO_BE_REPLACED

By Marlyn Rodriguez |Staff Writer| The Coca-Cola Company created an advertisement for the Super Bowl that has stirred up a lot of unnecessary controversy based on ignorant views of the makeup of our country. The commercial consisted of “America the Beautiful” sung in different languages. The advertisement includes the Spanish, Tagalog, Mandarin, Hindi, Hebrew, Keres, Senegalese,French and Arabic languages. As soon as the commercial debuted the backlash began. People started tweeting hateful remarks such as, “Nice to see that coke likes to sing an American song in the terrorists’ language.” Another said, “We speak ENGLISH here IDIOTS.” Soon the hashtag #SpeakAmerican began … END_OF_DOCUMENT_TOKEN_TO_BE_REPLACED

By Alyssa Gradias & Abigail Tejada |Staff Writer & A&E editor| The American Diabetes Association hosted the annual Step Out Walk to stop diabetes on Nov. 2. More than 4,000 local walkers attended, including the wonderful siblings Jillian Rose and Robbie Tucker who have worked closely with ADA ever since their older brother was diagnosed with Type 1 diabetes. November is Diabetes awareness month and currently there are nearly 26 million Americans who have diabetes. In efforts to raise awareness stars gathered up at the Step Out Walk for the ADA. Stars from the MTV hit show “Awkward” made an appearance such as Jillian Rose, Kelly Sry, and Wesam Keesh. Robbie Tucker … END_OF_DOCUMENT_TOKEN_TO_BE_REPLACED

By Mary Moreno |Staff Writer| The San Manuel Band of Mission Indians and CSUSB students were brought together on the weekend of Oct. 11 in celebration of the 18th annual San Manuel Pow Wow. CSUSB has had the privilege of holding the three day event on campus since 2001. Over a quarter of a million dollars in prizes were distributed amongst the different competitions and the participants ranged from ages 2 to 90. Native Americans from across North America gathered to celebrate and compete in different categories of song and dance. Some traveled from Canada and Alaska. The Pow Wow is a sensory overload between the performers visually intricate clothing, known as regalia, the … END_OF_DOCUMENT_TOKEN_TO_BE_REPLACED

By Jounghun Kim |Staff Writer| I came to CSUSB from Seoul, South Korea.  on Jan. 8, 2012. It was my first day in the United States and I have been attending classes here as an international student for about a year. While I have been living here, I experienced that the U.S. has so many more different cultures than Korea. I can point out several other things that are different. First, I must throw away my trash all at once in America. In Korea, we have to separate the garbage, cans, bottles, papers etc. into separate bins. However, the most wonderful thing that I miss is the food crusher. It is so convenient to use. Here you have the “to go box.” In Korea, people usually do not … END_OF_DOCUMENT_TOKEN_TO_BE_REPLACED

By R. Anthony Diaz |Asst. Features Editor| Despite the controversial politics set by the governor and legislature in Arizona, the state holds many beautiful wonders that are worth experiencing. Whether standing next to a cliff that enters the Earth’s core in the Grand Canyon or counting the hundreds of color variations in a single sunset, this is a place where you can revamp your soul. This is one of the few states where you can actually experience the desert’s heat, the cooling of a lake and the enjoyment of fresh snow. Although it would be nearly impossible to do all three in one day, these places are for those on a mission. One of the best spots for fun in the sand are the … END_OF_DOCUMENT_TOKEN_TO_BE_REPLACED