By Ivanna Carlos |Staff Writer| Leonard Nimoy, best known as Spock, died at 83. Nimoy, born in Boston, Massachusetts, on March 26, 1931, was pronounced dead in his Los Angeles home on Feb. 27. Chronic obstructive pulmonary disease, caused by his smoking, was the cause of his death. It is a shame that Nimoy didn’t quit smoking soon enough. Not only was Nimoy an American actor but also a film director, poet, singer-songwriter, and photographer. Nimoy started his career when he was eight years old when he acted in a play and continued acting throughout his high school years. He made his official debut in 1951 at 20 years old, with a minor part in “Queen For a Day”, leading to … END_OF_DOCUMENT_TOKEN_TO_BE_REPLACED

By Taylor Vermillion |Staff Writer| “Transcendence” is a film that shows the unbelievable advances that tech-scientists Will Castor (Johnny Depp), and his wife, Evelyn (Rebecca Hall) have achieved, including the technological uploading of human consciousness into a network-connected hard drive. “Transcendence” made its box office debut on April 10 and brought in $10.9 million during its release. The earnings show that the film shouldn't be considered a box office smash. Past films have addressed the powerful nature of computers, and whether or not their intelligence will someday surpass our own. “Transcendence” presents a new element that leaves the audience questioning whether … END_OF_DOCUMENT_TOKEN_TO_BE_REPLACED 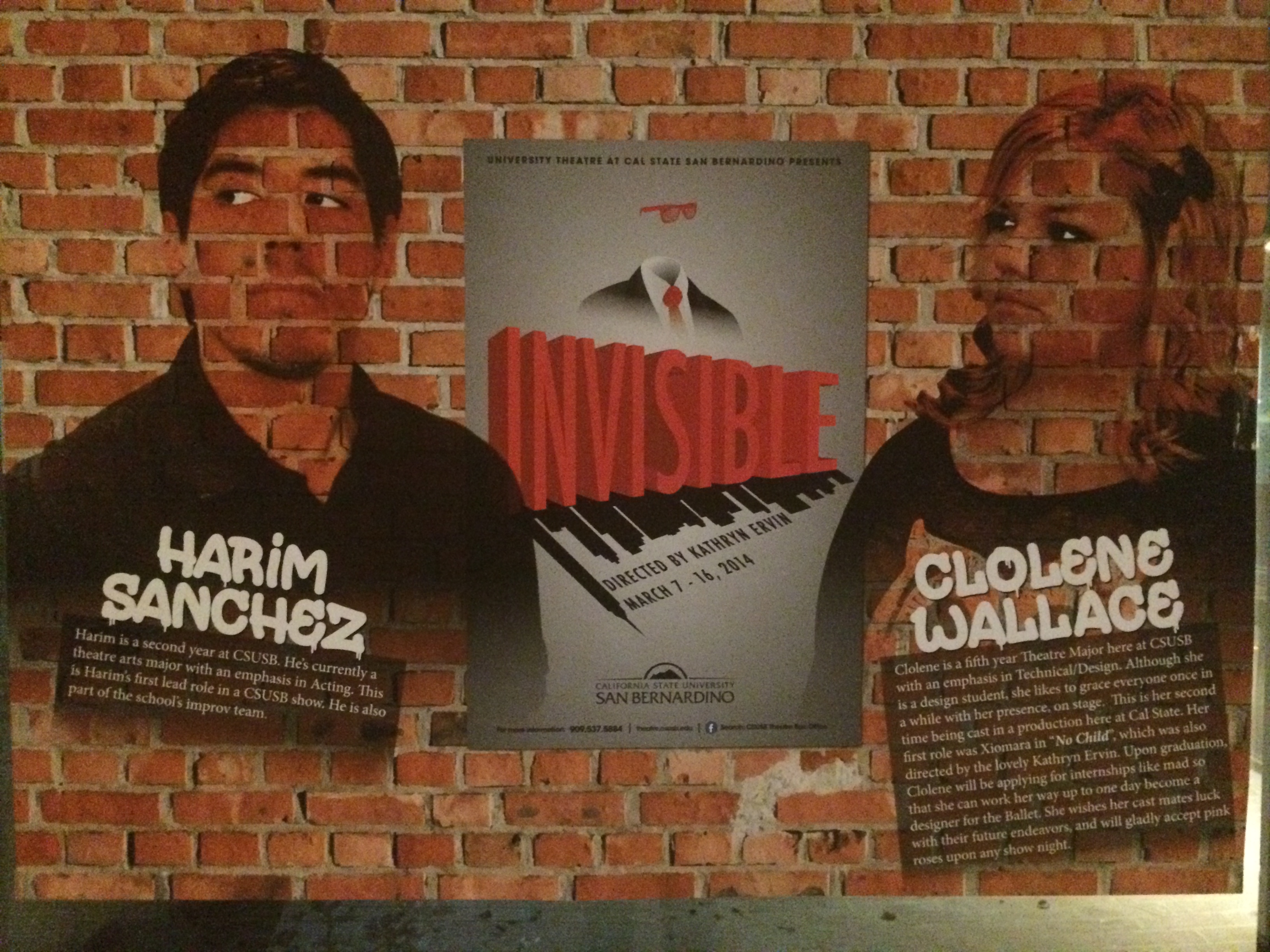 By Chrisoula Baroudos |Staff Writer| University Theater at CSUSB presents Invisible, coming out March 7-16 and held at the Ronald E. Barnes Theater. This play is based on the two novels, “The Invisible Man” by H.G. Wells and “Invisible Man” by Ralph Ellison. This whole play is a student assemble piece, even the set design was designed students that attend the college. Kevin Ezeh, a CSUSB alumni wrote this play, and collaborated with the director Kathryn Ervin about his ideas. Ervin, the director, expressed her views about what this production is about and what the audience can expect. “This production began as an exploration of two novels whose central character was ‘an … END_OF_DOCUMENT_TOKEN_TO_BE_REPLACED

By Diana Ramos |Staff Writer| Mary Shelly’s “Frankenstein” hit the California Theater on Feb. 14 -16 bringing in a full house at $80 per ticket. This new thrilling spin-off of the classic tale Frankenstein takes a complete left turn with the monster’s character. Instead of having a dim-witted monster like most writers have in their version of “Frankenstein,” Mary Shelly had a fast learning monster with a robotic like brain that was able to learn how to read, write and reason all in less than a year. The actors that performed in “Frankenstein,” held in the California Theater were good at making you feel the emotions they were portraying. The actor that played Frankenstein’s … END_OF_DOCUMENT_TOKEN_TO_BE_REPLACED

By Shannon Luster |Staff Writer| The blockbuster movies, coming summer soon to a theater near you, will make you laugh, cry, sit on the edge of your seat and are loaded with realistic looking special effects. Get your ticket stubs ready for the five highly anticipated movies, offering you an escape to a cool theater to beat the summer heat. “This is the End” revolves around a group of friends struggling to survive during the Apocalypse and arguing over the last Milky Way candy bar. This hilarious movie sports a talented cast, including James Franco, Jonah Hill, and Seth Rogen. The cast’s strong comedic timing becomes apparent in the trailer, as well as presenting a reason for … END_OF_DOCUMENT_TOKEN_TO_BE_REPLACED

By Shannon Luster |Staff Writer| “Star Trek: Into Darkness” delivers high action thrills that will leave you sitting on the edge of your theater seat. The exciting blockbuster movie soared to number one and earned $70.2 million during its opening weekend, according to the IMDb Charts. "Star Trek: Into Darkness” is the highly anticipated sequel to the wildly popular movie "Star Trek" released in 2009. The opening scene shows a high-speed chase on an exotic planet complete with a fiery volcano, which draws you into the movie feeling eager about what will happen next. Actor Chris Pine reprises the role of the iconic Captain James T. Kirk and actor Zachary Quinto also returns as … END_OF_DOCUMENT_TOKEN_TO_BE_REPLACED

By Shannon Luster |Staff Writer| “The Great Gatsby” draws viewers with such realistic looking special effects that it places you into the wondrous, dangerous world of millionaire Jay Gatsby. Although it faced stiff competition with “Iron Man 3” at the box office, “The Great Gatsby” managed to open at number two and earned $51.1 million in its opening weekend, according to the IMDb Charts. Producer, writer and director Baz Luhrmann, director of movies like "Romeo and Juliet" and "Moulin Rouge," has returned with his take on the novel, "The Great Gatsby." Traces of "Romeo and Juliet" also showed up in "The Great Gatsby," since both movies revolved around a pair of lovers becoming … END_OF_DOCUMENT_TOKEN_TO_BE_REPLACED

By Shannon Luster |Staff Writer| She and Him returned with a 14-song compilation of catchy and foot-tapping good tunes in their third album Volume 3, recently released on May 14. Zooey Deschanel and M. Ward make up the band, which has become wildly popular, especially in the independent music circuit. The band’s music is an influence from 1960s bands like The Beach Boys, well known for their breakthrough, psychedelic album, Pet Sounds, in 1966, including popular songs like “Good Vibrations.” She and Him’s vintage fashion sense also reflects their music, both a throwback to an earlier era, but with a modern twist. One of the songs Deschanel sings in Volume 3 is “Hold Me, … END_OF_DOCUMENT_TOKEN_TO_BE_REPLACED

By Shannon Luster |Staff Writer “The Big Wedding,” promises to deliver comedic thrills that will make you laugh right out of your seat. The hilarious movie opened at number four and earned $7.59 million during its opening weekend, according to the IMDb Charts. The movie has similarities to the wildly popular, “Father of the Bride,” movie series, starring actor Steve Martin that revolves around a family reuniting for a wedding and the resulting craziness that ensues. “The Big Wedding” gives an updated twist that includes adoption, divorce, cheating spouses, and other surprises. Writer, director, producer Justin Zackham, writer of movies such as, "The Bucket List" and "Going … END_OF_DOCUMENT_TOKEN_TO_BE_REPLACED

By Shannon Luster |Staff Writer| The local theaters and venues in San Bernardino and Riverside offer highly anticipated live entertainment ranging from plays to music festivals and performances. The Fox Theater is well known for historically being the first theater to present the classic movie “Gone with the Wind,” starring Vivien Leigh and Clark Gable back in 1939. The Masters of Harmony returned to the venue with a performance called “Pulling Out the Stops," on April 28. The choir, directed by Justin Miller, sings different types of songs such as: jazz, Broadway, classical and more, according to the Fox Theater’s official website. The theater is also looking for … END_OF_DOCUMENT_TOKEN_TO_BE_REPLACED