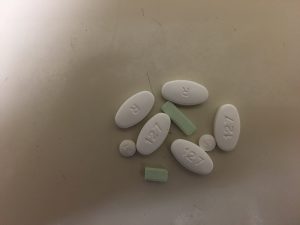 The use of steroids and other performance enhancers among athletes, especially collegiate athletes, seems to be an increasing issue.

When it comes to being an athlete, competitiveness is a natural trait. However, there are times when an athlete is suddenly injured only days before an important game, or interested in gaining more muscle quickly.

The National Collegiate Athletic Association (NCAA) has a strict no doping policy. Doping is when an athlete injects or orally consumes an illegal substance.

This past year the program has tested over 61,000 athletes in over 300 different college campuses, according to Forbes.

Androgenic steroids are natural androgens that have the same side effect as testosterone. They were created to help maintain a constructive metabolism.

“Most people who use performance enhancing drugs (PEDs) are recreational users rather than professional athletes,” said Dr. Adam May, who works at the CSUSB Health Center.

These steroids and other PEDs are not only harmful to its users mental health but their physical health as well.

For a player to gain 20 to 25 pounds of muscle within a year’s time is nearly impossible with just diet and exercise. So, to see such a quick gain is usually an indicator or red flag of a frequent substance abuser.

Long-term effects of such substances include an increased risk of tendon rupture, stunted bone growth in adolescents and liver cancer.

“PEDs are used to enhance athletic performance and to promote the appearance of a leaner and more muscular physique,” said May.

Along with the no doping policy there is also a ban on the use of recreational drugs in college athletics.

Proposition 64, which just passed this past November, legalized recreational drugs within the state of California.

However, the NCAA does not allow such use within its athletic programs and those that fail to meet the drug-free requirements will be punished depending on the offense.

Some institutions will give up to three warnings when caught doping before suspension, while others may enact immediate suspension or termination.

Another substance that is familiar among athletes would be Creatine.

“Creatine is actually a naturally occurring substance in the human body and it has been proven to increase performance of short duration high-intensity exercise such as sprinting and weight lifting, but includes side effects like weight gain, reduced joint mobility, and muscle cramping,” said May.

Because anyone can purchase the supplement with no prescription needed, it’s “definitely a pro for athletes as the only con would be, if you stop using it, you gain weight,” said personal trainer at 2WinSports, Josh Gonzoles.

“It’s not uncommon to hear about coaches giving their players something to up their advantage. As in college everyone is good, so typically some try to give themselves some type of advantage,” stated Gonzoles.

Runners and some basketball players may be encouraged to engage in what is known as blood doping.

This process is when the athlete is trying to boost their red blood cell count to enhance their athletic performance.

“The more red blood cells you have, the more oxygen you can carry, so the less tired you become,” said Gonzoles.

“Many are not aware that increasing one’s blood thickness makes them more prone to the risk of having a stroke or heart attack,” said May.

The negative impacts of blood doping include health risks such as transfusion recreations, urticarial, anaphylactic shock and contracting infectious diseases such as hepatitis, HIV or malaria.

The use of steroids do nothing positive but create both extreme internal and external damage. One is guaranteed to live longer and healthier with proper diet and exercise.