By Wendy Wheeler and Amy Neault

For the last five years, Queeroake has been an annual tradition at CSUSB. On January 23, 2020, CSUSB’s Transgender and Queer Resource Center held an event called Queeroake in SMSU Bay from 6-9 pm.

Queeraoke is an annual event that happens every Fall quarter here on campus. However, this year the event was held during the Winter Quarter instead, due collectively to all of the weather based campus closures CSUSB had during the Fall quarter. Thus, the Queeraoke event was rescheduled and held at a later date as the weather allowed. 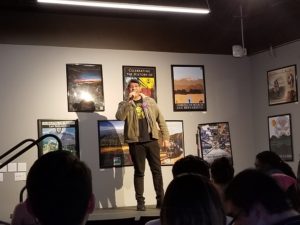 Queeraoke is a night of fun and entertainment featuring not just a collaboration of drag and karaoke, but free food, beverages, and many desserts for all of the sweet tooths out there. The event offered an array of mini sandwiches, finger foods and the like, as well as cupcakes, brownies and other small sweet delights.

Senior and graphic design major, Madison Thompson, who works in the Queer and Transgender Resource Center, is one of the people who assisted in the planning and coordinating this event.

Thompson said when the Transgender and Queer Resource Center thought of this event, “It was just a regular karaoke event, but then the center decided to put a twist to it and have Queer and Karaoke combined, then voila, Queeroake happened!”

In hosting the event, Melody kept the audience entertained with ease by way of loud, fun energy exuded by a vibrant personality. Once the room started to fill up with students and staff attendees, Melody was able to charm the crowd and convince the show go-ers to loosen up. Students were encouraged to get on stage and sing, while Melody was jokingly using pet names and making wisecracks to ease the tension of being on stage.

Fourth-year student Hector Ramos, a communication major, attended the event with friends. He was invited by a friend who was interested in the event but was too bashful to actually perform songs for the crowd.

“She didn’t want to sing because she was too shy, so she had me go up there for the both of us,” said Ramos.

Ramos sang two songs, ‘Blister in the Sun’ by the Violent Femmes and ‘Como La Flor’ by Selena. Ramos’s performance served as an example of the various songs sung by those who attended the event, all of which were ‘singer’s choice.’

“The vibes were good and everyone who sang did great,” Ramos recalled. “We all had a great time and I would definitely go again.”

For more information on this event and more upcoming events like it, feel free to visit the Queer and Transgender Resource Center located at SMSU 112.