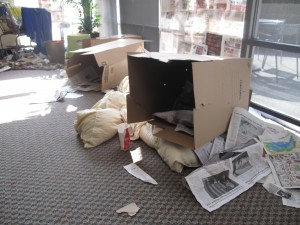 The event was held on the second floor of the SMSU on March 4 and 5.

As you enter the tunnel you saw various quotations, statistics and cases regarding oppression.

Oppression is defined as, “Unjust or cruel exercise of authority or power,” according to the Merriam-Webster dictionary. 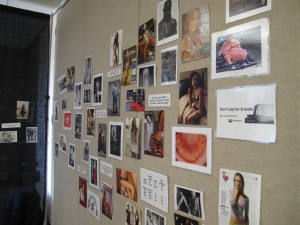 The first wall was dedicated to hate crimes and vandalism that occured all over the world.

“Swastikas and the words ‘white power’ were written on garage doors of several residences on a street in Baldwin Hills,” was an act of vandalism that took place during June 2012.

As you walked further into the tunnel, the words hate, prejudice, discrimination, oppression and stereotyping were written in a bloody fashion.

You felt the chills as you walked around every corner anticipating what was next.

The tunnel then goes into a history of oppression and hatred with the displays of very gruesome images, one entitled, “Fucking Jews,” turned the heads of many students.

One caption states, “In the 1980’s and early 1990s, pagan magazines frequently reported instances of attacks on followers of Wicca, Druidism, Asatru, and other Neopagan traditions.They took many forms: threats, physical assaults, shootings, etc. At the extreme was one attempted mass stoning and an actual murder by lynching.”

The next turn along the tunnel may be the most disturbing, as it depicted the obsession of perfection in American society.

Charts that compared an average woman to that of a Barbie doll and a female mannequin were also on display, as well as statistics about anorexia and other disorders.

Written on the wall was, “Two out of five women and one out of five men would trade three years to five years of their life to achieve their weight goal.” 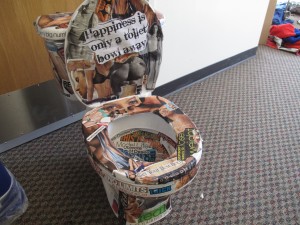 The end of this tunnel displayed a mirror to show the audience who they really are and beside it is a decorative toilet bowl covered by images of perfect-bodied models. The toilet reads, “Happiness is only a toilet bowl away.”

The toilet metaphorically instilled the idea that all of society’s expectations of beauty and perfection should be flushed down as opposed to idolized.

The most disturbing part of the tunnel was next. Trash and cardboard flooded the floor, the “Homeless” scene was so horrendous that it created false scents in your mind as if actual urine and body odor filled the air.

“Over the course of one year an estimated 245,000 men, women and children experience homelessness in the Los Angeles City,” according to the wall post.

Next, you walked into the room of domestic violence where images of beaten women were displayed with no censorship. “One in four college women surveyed are victims of rape or attempted rape.”

Racist remarks of Ku Klux Klan were shown on a projection screen in the next turn along with nooses hung across the ceiling.

One-viewer reports, “We don’t need them. They could disappear for all I care,” in regards to Blacks and Mexicans.

As one nears the end of the long horrific tunnel, one is exposed to crimes against people with disabilities. “One of the lesser known types of hate crime is a bias crime against someone with a disability.”

Lastly, was a tunnel through the hate crimes against homosexuals.

“The opportunity to be threatened, humiliated and to live in fear for being beaten to death is the only special right our culture bestows on homosexuals,” according to Diane Carman.

The Tunnel of Oppression was a horrifying and shocking exhibit that opens eyes and minds to the oppression still going on today.