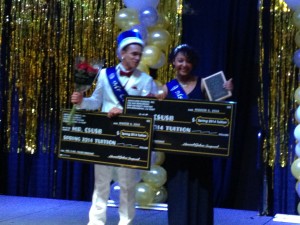 From heartfelt singing to rapping intricate lyrics, the Mr. and Mrs. CSUSB pageant was a night to remember.

The night was filled with much excitement, including a talent portion, interview portion and a in formal wear competition.

The CSUSB pageant gave all students a chance to enter a best dressed roaring 20’s costume contest as well, which resulted in one lucky student winning two Disneyland tickets.

The whole CSUSB pageant was funded and organized by Associated Students Incorporated (ASI). The participants were competing for free Spring tuition.

Student Holly Murphy, the ASI student programming assistant, said, “The pageant is a great way to get people into school spirit and for people to compete. We have some very talented students all throughout campus. It’s a great way for them to earn something and they’re earning student fees so everyone has a chance to win.”

The talent show had everything from the tasteful singing of Kendall McGraw, Julia Bray singing with her ukelele, to John Orta, known as DJ Infinity getting down on the turn table.

“I’ve had dreams of becoming a CSUSB student since I was young,” said student John Orta.

I asked Murphy how the money was funded for the pageant and she said, “It was funded through student fees. ASI is soley funded by student fees, it’s part of the additional fees tacked onto tuition.”

When asked how the participants were chosen Murphy stated, “Aside from the application process there was a grade check. If the grade check was adequate and everything was up to par, the rest were judged on their ability to be a good representation of ASI and CSUSB.”

The dance company even made an appearance, and performed twice for the audience.

There was a fun twist  in the event when the announcer told everyone to look under their seat. Under the seats were the ballots for electing fan favorite and best personality.

During the interview portion, contestants were asked how they would change the world. Olivia Quimby said, “We all need to eat health food; switch and eat only organic food.”

Orta said, “I was personally involved in donating an organ, and feel that if everyone was willing to donate an organ, the world’s needs would be met.”

Runner ups to Mr. and Mrs. CSUSB were Orta and Dominique Espouza.

To end the night, after all the hard work and hearts being poured out on stage, Alexis Singleton and McGraw were crowned Mr. and Mrs. CSUSB.

The whole night was a spectacular display of events and lived up to the hype.

The CSUSB pageant is definitely a favorite now and could be for years to come.