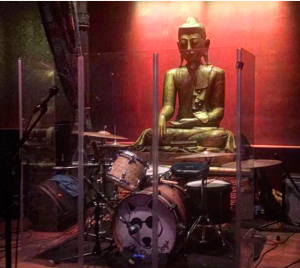 This ’60s rock ‘n’ roll-themed party, for anyone 21 and over, takes place every month in the Foundation Room VIP Lounge at the House of Blues in Anaheim for free. I went to one at Soul Kitchen on September 29

This event showcases up-and-coming bands of the Rock and Funkadelic genre, which are handpicked by the resident band for the party, The Bash Dogs.

After walking through the VIP doors, vintage jams were played by vinyl DJs, Sammie and Peri. Special themed drinks were ready to order, such as the Mr. Morrison and go-go dancers were getting down, which helped set the vibe for the night.

“I had never been to a Funkadelic or throwback concert like that. It was really cool to see everyone dressed up in their ’60s clothing and it was just a cool atmosphere, something completely different from the normal club scene for people our age,” said fourth-year CSUSB student, Kaitlyn Norris.

The brains behind this popular rock party are the Orange County–based band, The Bash Dogs. After a long night of partying in the Foundation Room with the well-known band, The Growlers, Nate Barrett the lead vocalist, came up with a great idea to bring the ’60s back to the OC—through Soul Kitchen, aptly named after The Doors’ famous song. Days later after creating the proposal, Nate and his good friend Emo were able to gain an audience to propose the party.

“We killed the meeting and Ari Xaubet, the Foundation Room promoter, was kind enough to give it a test run, the first ever Soul Kitchen. He said if it went well, we could throw our party every month. Well, now we are coming up on Soul Kitchen 5,” said Barrett.

The Barrett brothers, Nate and Jeremy, first began playing music in their early childhood after learning a Van Morrison song for their elementary school talent show. Since then, it’s all been leading up to The Bash Dogs by picking up two other bandmates throughout the years.

“When we hit high school, we met our low-frequency love machine Nathan Schmok, the best bassist we had ever seen. We had him over to jam and his style was just like John Paul Jones… we knew right then, he was our guy and he’s been with us ever since. Over the years, our sound has changed tremendously which is why we wanted to expand that sound… by getting a ripper [Riddle] on the keys,” said Barrett.

The Bash Dogs have become one of the leading groups in the revival of Funkadelic Rock, similar to that of the 1960s-’70s. The Bash Dogs believe that the ’60s created a significant and creative energy that wasn’t seen before that time, with many amazing artists such as The Beatles and Led Zeppelin, who inspire. For each Soul Kitchen, they bring on bands that they think to represent these genres the best, such as Levitation Room, who played this last Friday’s party.

“Everyone’s starting to wake up. I think it’s beautiful that something from the past that existed during a time of change, and social unrest is here again. And the whole thing is DIY. Everyone is helping with the idea of love,” said Jaykob Mare, who has been in the industry for over 10 years.

Soul Kitchen 5 takes place on October 29, as the big Halloween Party. Candy, costumes, and funky tunes will be had all night from 10 p.m-2 a.m. The band keeps its social media presence as @thebashdogs on Instagram to promote their events and the upcoming album release party in January 2018.