Video game movies have a bad reputation in the movie industry. Critics say that these movies do not use the source material, or that they only exist for the paychecks. However they need just as much care and love as other films to be able to convey their stories to audiences. 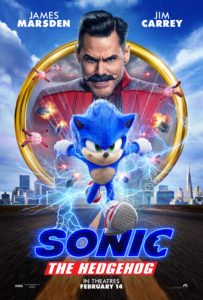 As for Sonic the Hedgehog, it was a roller coaster. The first trailer was a disaster, and the company had to delay the film to fix the main character’s design. On February 14, the film was finally released and, after watching the movie, I have to say that the film is unexpectedly good after the backlash from the first trailer.

This film has a good story that people can follow. Sonic was sent to Earth and goes into hiding because everyone in his world everyone is trying to steal his powers. However, a sudden release of his energy is detected and the government responds by bringing out Dr. Robotnik. The story is simple and not too complex, but it is also predictable, as this type of storytelling has been shown in many films like E.T. and other movies. Although this storytelling has been done too many times, it makes sense for this film because it is an origin story for Sonic, and since the characters are treated well and are not too annoying, it can be enjoyable.

The main character, Sonic, is an enjoyable character. The redesign makes Sonic more nostalgic to the audience and allows them to connect with him more. By seeing the way Sonic feels alone on Earth, it makes us really want to be his friends. I also think that all of the emotional scenes made a big impact, and it makes me wonder what would have happened if the original design had been kept. It would not have had the same impact as the redesign since the redesign has many more facial expressions than the original one. I believe that Ben Schwartz is the best actor to voice Sonic since he shows that he cares for the character and wants to create his own version of Sonic.

Jim Carrey as Dr. Robotnik is the highlight of the movie. I never expected Jim Carrey to play a villain after his role in Batman Forever. Carrey is emulating his greatest 90s roles, like Ace Ventura and the Riddler, in this film. He tries his best and, just like Ben Schwartz, he creates his own version of the character. Although Carrey doesn’t make the character complex like Thanos, Robotnik is still a compatible villain for Sonic and he really shows us why he is labeled as the iconic villain of the Sonic series.

As for the other characters in the movie, they are not that bad. Most of the time, the side character faces problems in his lifestyle or marriage. However, none of those qualities show up in James Marsden‘s character, Tom. Tom is a likable character that works well with Sonic. He is never a jerk from the start of the film and wants to help Sonic get the portal rings he lost. Tika Sumpter’s character is also great and the two characters feel like a real couple. The only gripe for me is that I would like to see a bit more of the side characters, but since Sonic is the main focus, I do not mind as much since the writers make them good supporting characters.

Overall, Sonic the Hedgehog is a good movie for fans and families. While this movie does have some flaws, and not as groundbreaking like Joker or Parasite, it is still is a fun family film that anyone can enjoy watching with their kids. For Sonic fans, this film is one of the best representations of the character and the series. If you are a Sonic fan and have not watched it, I highly recommend watching this film and seeing how this franchise continues because Sonic the Hedgehog is one of the best video game adapted films to exist.