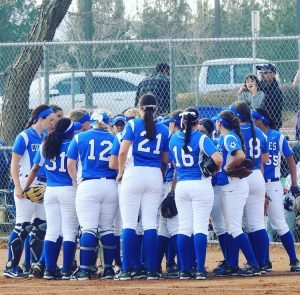 The women’s softball team has been around since 1987 and they are advancing in their 31st season.

They plan to build off of their past three winning seasons and aim for their fourth. The last time this team put together four straight winning seasons was from 1987-1990 when the team was just getting started.

The Coyotes began their season on Feb. 3 in the Desert Stinger Tourney against Minot State. They won by a score of 8-2, displaying their strengths and determination for the current season.

The next game of the tournament, the Coyotes lost to Azusa Pacific with a score of 2-0. This game came as a bit of a surprise for our team after scoring eight in the previous game.

They recovered the following day of the tournament, and won the remaining three games.

The first win of the three game win streak came against Northwest Nazarene with a win of 6-2.

The second win was against Western Oregon where they squeaked by with the win with a final score of 5-4.

The Coyotes retaliated after being down 4-2, but thanks to the heroics of Taylor Ancona, who hit a double for her team to score in the last inning, the Coyotes were able to record the win.

The last game of the tournament was against Hawaii-Hilo. The Coyotes won with a score of 4-0. They jumped out to an early lead scoring three runs in the first and were able to play good defense and shut Hawaii out.

The team was off to a hot start with a record of 4-1 after their first tournament. However, they cooled off in the second tournament winning only one out of three games.

They started off the Dixie State Tournament playing against Montana State-Billings, ultimately losing by a score of 5-4. Montana was able to win with a walk-off homer in the bottom of the seventh inning.

In the next game of the tournament, the Coyotes were scoreless for the second time this season. They lost this game 3-0 to Concordia University of Oregon.

However, they recovered after losing two straight games, winning what would be their last game of the tournament. They won by a final score of 12-0 against Western Washington, which was the Coyotes best performance of the season thus far.

With the Coyotes starting the season off with a record of 5-3, they are determined to get themselves their fourth straight winning season, and hopefully a shot at the NCAA tournament.